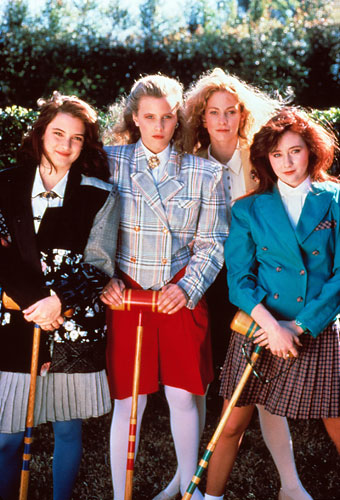 Make no mistake...some truly mean girls in Tango make this clique of croquet club-wielding, back-stabbing popular girls named "Heather" look like a bunch of wimps
Recently, we welcomed back to town a dear Tango friend whom we haven't seen in about six years.  We are so happy to see her in the milongas!  We have been reminiscing about the past, when we were young and carefree, taking our first baby steps in Tango.  Those were the days - we went adventurously to all the milongas, stayed up until 4 a.m. in some of them (and got parking tickets when we parked our cars where we shouldn't park), and danced with all sorts of Tangueros - good, bad and ugly. Oh, the fun we had!

Our beautiful Tanguera friend learned how to tango when she lived in Buenos Aires. She was an amazing dancer back then, and still an amazing dancer now - just a little rusty from not dancing at all for six years.  It only took a few dances to bring her back up to speed (she's a natural at Tango) - and of course, my Toronto milonguera friend and I made sure to inform her about the Creeps, the Monkeys, the Road Ragers, the Tangueros that you shouldn't ever, for the sake of your own sanity and bodily integrity, be "Nice" to...

"Oh my God!" our Tanguera friend said suddenly at midnight at the milonga last night.

Was it her curfew?  Was she going to do a Cinderella and turn into a pumpkin?

"I really don't want to dance with that guy and I'm afraid he's going to ask me to dance!  Should I just get going?"  She was ready to leap out of her shoes and dash to the door, and the night was still young!
She had been away from Tango too long and has forgotten about "The Power of NO".  We, as her friends, gently reminded her.

What's that I'm hearing?  Little tiny voices of dissent?  "Oh Irene, you're so mean!  It's one thing to say "No" yourself... but to encourage this barbaric behaviour in others as well!  You are meaner than the mean girls in "Mean Girls" and "Heathers" combined!"

In Tango, "No" is nothing to do with being "Mean".  We all have the right to say "No" when we dance the Tango - if anyone tells you otherwise, they are either wrong or they are not dancing Argentine Tango.  When we dance the Tango, we give it our All.  It's never a matter of "It's only twelve minutes, how bad could it be?", because when we give our All, even a step together encompasses eternity - and imagine spending eternity with someone you want to kick out the window.  When we dance with someone we don't want to spend even a second with, we as dancers cannot give our "All", and that is a betrayal of both ourselves and the dance.   Some people may argue that "It's not right" to "humiliate" potential dance partners by refusing them - well, the Argentines invented the "Cabeceo" for a reason.  Don't want to be humiliated when you are rejected in public?  Then stop coming right up to the table to ask for dances and learn how to "cabecear" instead!

One reason why our friend did not dance the Tango during all these years away from Toronto was precisely because of this problem.  She moved to a city with a large and vibrant Tango community - milongas and events every night of the week.  She even attended some of these milongas - but sat uninvited all night everywhere she went.

It wasn't that people were attending the milongas were all in couples and there were no available men to dance.  There were lots of men.  Unfortunately, they happen to be in little cliques with very possessive and jealous women - if their men dared ask anyone outside their circle to dance, they'd get the "evil eye"!  And these weren't men who were old and tired and only had one or two more dances left in them - they were ones that could dance all night.  Their "clique friends" would rather have them sit than let them dance with the other women in the milonga.

We used to get a bit of that in Toronto too.  No so much cliques (although we have them too), but women who would scratch the eyes out of their partners if they even dared look in another direction.    One woman became so famous for her jealous rages - other women would turn her husband down when he went to ask them for a dance just to avoid triggering her nuclear meltdown.

A friend of mine used to dance quite happily with one particular Toronto Tanguero - one of those "dance all night" types - that is, until he hooked up with a dance partner who decided otherwise.  He abruptly stopped dancing with my friend.  One night we found out why.

Toronto Tanguero, pleading with his partner: "Could I dance with _________ tonight?  I haven't danced with her for ages!"

Dramatic response from his dance partner (and not even wife, or girlfriend!), Ms. Hoard: "Excuse me?  I want to dance."  She stood up and blocked his way.  My friend and I looked at each other incredulously - we were sitting next to Ms. Hoard and her partner and of course we overheard everything!*

* Ms. Hoard and her dance partner has long since split up, but Ms. Hoard has not ceased her exhibitions of meanness - she's the one still kicking up her pointy four inch stiletto heels in high kicks and boleos in crowded milongas, jeopardizing of the safety of the Tangueros and Tangueras around her.  Has she hurt anyone?  Of course she has!  Does this stop her?  Of course not!

Luckily in Toronto the above is the exception and not the rule - our Tangueras are warm-hearted and generous and are quite happy to let their partners (husbands, boyfriends, dance partners) dance with others if they so wish. This generosity is one of things that builds the community - and not the misguided notion that one should never say "No" when asked to dance.
Posted by Irene and Man Yung at 8:01 PM

Email ThisBlogThis!Share to TwitterShare to FacebookShare to Pinterest
Labels: Cabeceo, Dance Etiquette, The Power of No, Toronto Tango, Warnings and Dangers

Well, I certainly hope that the nasty "hoarding" disease doesn't make it to our community.

Thanks for emphasising the importance of "No" on your widely read blog. Hopefully more ladies will rehearse and confidently put into practice that apparently difficult word. Exercising real choice through effective use of the cabeceo will lead to better milongas for everyone.
This is a hot topic for me, as you'll see on a recent post - http://tangosalonadelaide.blogspot.com/2011/11/cabeceo-making-most-of-it.html

Funny coincidence that one of the 2 ladies you were sitting with on Friday was sitting with me before you arrived. I was telling her of this wonderful couple- she who only dances with her husband or the occasional visiting maestro and generously shares her husband, and he who does not like to see any lady sitting and is such a joy to dance with(is it wrong to consider a tanda of milongas fun?)

You are not a mean girl. And I have bruises, which I deserve, from that visiting maniac who said "why waste money on lessons or travelling to Argentina" I have learned tango from watching youtube". Imagine R's face when he told her the same? Must learn to say No to tango bullies.
Laurie

Thanks for the link to your post - more voices advocating the cabeceo is always needed to improve the standard of Tango around the world!

Let me guess...were you abducted by a big monkey? It's absolutely true you don't need to travel to Argentina to learn how to Tango...if you want to dance like King Kong (i.e. atrociously).

One important lesson we learned from Osvaldo and Coca was how important it is to be gentle in Tango. When we thought we were being gentle enough, Osvaldo and Coca said... be even more gentle! We communicate better through our bodies when we are not shoving and pushing. We have a choice - dance like two people, or dance like a ragdoll being manhandled by rampaging gorilla.

Yes, "No" to bullies sounds right!