The amazing, astounding music of the Franco Luciani Trio 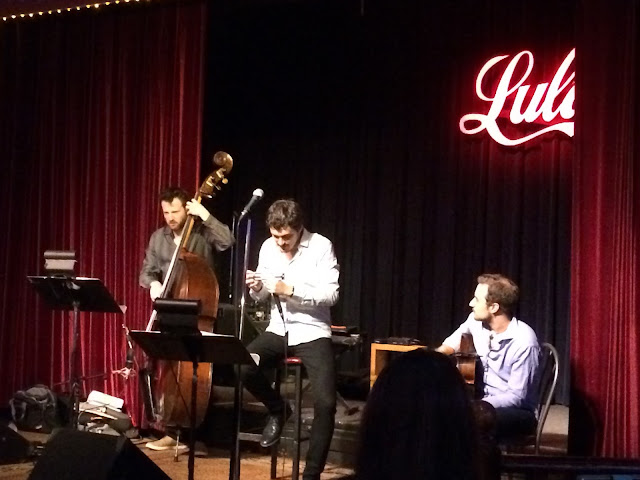 For those of you who couldn't make it to Toronto Tango Club or Lula Lounge over the long weekend: Sorry guys, you missed two fantastic, unforgettable nights of Argentinian music from the Franco Luciani Trio.

We caught the Trio in concert on both nights (for a steal of a price of $25 per person including milonga on both nights) and we are still jumping up and down with joy (literally!) from the experience of hearing them and watching them perform.

There is a informative biography of Franco Luciani on his official website in English and Spanish  (link: http://francoluciani.com.ar/)   I'm going to put a little excerpt here:

Instrumentalist, composer, vocalist and harmonica interpreter Franco Luciani is considered by Argentine critics and the media to be one of the most remarkable and talented musicians of the new generation. Born in Rosario (Santa Fe, Argentina), in 1981, he started out studying drums and percussion. He attended the National University of Rosario [Universidad Nacional de Rosario], the Municipal School of Music [Escuela Municipal de Música], and the Provincial School of Music [Escuela Provincial de Música] in his hometown, graduating from this last institution with the nationally validated degree of Music Teacher Specialized in Symphonic and Drum Percussion. However, he ultimately carved out a professional career as a harmonica player, covering all types of harmonicas, but specializing in the chromatic one. He is an exponent of Argentine popular music, both rural and urban (folk music and tango, respectively). This inclination led him to compete in the Pre-Cosquín Contest of the Cosquín National Folklore Festival in 2002, where he was the winner in the ‘Instrumental Soloist’ category, and then granted the 2002 Cosquín Best New Artist Award [Premio Revelación Cosquín]. This festival, in which Franco has taken part non-stop since then, is considered to be the most important festival of Argentine folk music, and one of the main folklore festivals in Latin America.

Franco Luciani's biography is truly impressive and his performances in Toronto with his Trio did not disappoint.  The Trio consists of Franco Luciani on the harmonica and vocals, Leonardo Andersen on the guitar, and Alberto Munarriz (who is an Argentinian musical scholar living in Toronto, teaching musicality classes at the Toronto Tango Club) on the double bass.

Honestly speaking, the Franco Luciani Trio is the BEST group we have heard performing live Tango for dancing, and we have heard many world famous groups and orchestras over our fourteen years dancing tango in both Toronto and in Buenos Aires.

The Trio performed two very generous sets of forty minutes each at Toronto Tango Club on Sunday.   They were only three musicians but they had a HUGE, beautiful sound backed by clear, driving compas.  All of the music was danceable, you just can get on your feet and dance and the music never strayed from that core danceability.

At the Lula Lounge the following Monday, the Trio demonstrated their broad artistic talent with a showcase of music from Franco Luciani's latest CD, "Anda en el Aire".   In the first set, we enjoyed a mesmerizing mix of folklore, tangos by Astor Piazolla and contemporary compositions by Franco Luciani himself.  Later in the evening, we danced to more live Tangos, Valses and Milongas from the Trio.

How would we describe the music?

Franco Luciani is a wizard of the harmonica.  In our opinion, he is Hugo Diaz but even better - because we can really dance to his music!

There is a wonderful comraderie between the members of the Trio.  They are world class musicians but their music never loses that ease and delight comes from jamming between good friends.

Their music is human, moving, passionate, and close the roots.  Man Yung says that he feels a lot of joy and peace listening to their music because it is SIMPLY SO GOOD.

* And if you are a Milonga organizer and Franco Luciani is touring near you, you got to book him for your milonga.  Dancing to his live music is such a splendid experience, there are no words!