Just when we thought that Toronto Tango leaders were following the line of dance and dancing with respect for other dancers on the dance floor....

"Wow, look at that HOT guy weaving out in and out of all of the lanes of dance at once like Formula One on speed!" somebody shrieked.

All Tangueros and Tangueras swiveled their heads to look.

Yes indeed, some skinny tall guy with fashionable facial hair in an untucked shirt was plowing violently through the crowd with his high-kicking (and also skinny) partner. The bodies of pathetic, old, unattractive and weakling dancers caught in his path were being flung helplessly in all directions in the growing trail of destruction.

He spins menacingly with knees, elbows, heels all jutting out at once!  He tailgates!  He takes up  more space than twenty dainty milonguero couples! He takes big long strides right into furniture and other people!  In fact, he has more sparkly arrogant invincible confidence about his dancing...than someone who actually dances well!

"Ooooooooh!  So dreamy!" went the collective sigh across the room.

"Come on guys! He's not THAT hot!  In fact, I would say that a leader who is so atrociously inconsiderate to all the people around him is NOT HOT AT ALL," I said.  "Attractiveness is no carte blanche for being an asshole on the dance floor!  I think there must be a word to describe him, but how can you put Bimbo and Tanguero together?...Bimbanguero?  Tanguerimbo?"

My objections were ignored.  All eyes, male and female, stare in his direction for the next chance at cabeceo. Who cares how much injury he inflicts when he dances - so long he isn't fat and/or old?

Why be a good social dancer if you are... skinny, fast, young and good-looking?*  All the ladies (and especially the ones who are tall and who look like models and who kick so high on the dance floor you can see their knickers) are DYING to dance with you even though you don't know how to dance Tango socially.

* The unfortunate truth - you can get away with murder in Tango if:

For all those hoping to dance like a Bimbanguero/Tanguerimbo with no repercussions, good luck with your reincarnation into the next life.  Hope you will reincarnate into a young, good-looking Tango instructor from Argentina, then no-one will mind!

Posted by Irene and Man Yung at 7:11 PM No comments:

WE CAN'T BELIEVE ARGENTINA LOST!!!!! They played so well.  We are very sad.

For all you fans of Argentina who dance Tango, hope you will feel better after you dance a little Tango tonight.  Meanwhile we would like to share with you a recent performance of Milonguisimo - Oscar Hector's long running show with the dancing of authentic milongueros.  We got to know a lot of our milonguero friends through the show, including our beloved teacher Alberto Dassieu.  In this performance in June, the following dancers took to the stage for the ensemble performance:

In this part, the dancers are joined by Oscar Hector and Teresita Brandon - and they even do a little bit of swing:

And finally, they dance lively milonga and vals.  The younger dancers are Andre Laza Moreno and his partner Luciana Arregui:

A big hug to all our friends in Milonguisimo!

I'm too nervous to watch the Argentina vs. Germany final starting now.  Man Yung's going to watch the match for me and I'm going to take a nap and hopefully wake up to find that Argentina has won!

Before I take the nap, however, I'm going to share with you some virtuoso milonga and vals by the lovely Adela Galeazzi and Horacio Prestamo of Milonguisimo:

Man Yung says you can see what a happy expression Horacio has to dance with such a wonderful partner like Adela!

It feels like an extra long weekend for us even though Monday was a workday.  This is due to a combination of a) Irene taking Friday off, b) Dancing Thursday, Friday, Saturday and Sunday evenings, c) Canada Day today and d) World Cup soccer matches always make every day seem like a holiday!

The World Cup gives everyone something to talk about.  Complete strangers will strike up conversations about the merits of each team and the latest results.  Malls, lobbies in commercial buildings and even in court houses have big screen TVs set up to broadcast the latest matches so nobody has to miss a game even if they are working or shopping.

Unfortunately, Canada didn't make it to the World Cup this year... but it doesn't stop people here in Canada from having their favourite teams.  We think that just about everyone in Tango (in Toronto, at least) wants Argentina to win.  We are also cheering for Argentina - if they won all our friends in Tango and in Buenos Aires would be so thrilled!  I am also (or was also) cheering for England. "I know, I know, they have been so disappointing in both the World Cup and in the Euro Cup for the past decade, I couldn't even bear watching any of their matches because they always end up losing!"  I said.  "I can't help it, I was born in England and the England team will always be a sentimental favourite for me, even if the team can't work together and haven't had a decent goalkeeper since David Seaman retired!"

Man Yung has a more merit-based approach.  "I am cheering for the teams that played the best with the best sportsmanship and best spirit.  This year has been especially exciting for me to watch all these not traditionally soccer powerhouse teams win against famous established sides - look at the great results from teams like Costa Rica, Mexico, Chile, Algeria, Nigeria, U.S.A., who made it to the round of 16."

What we don't admire - teams whose players plan to win at all costs.  They may play good soccer, but some of their competitive edge comes from things like obnoxious fouls, ridiculous dives, all defense and no offense ("Sorry, pulling up a bus in front of the goal to stop the opposite side from scoring isn't real soccer," says Man Yung.  "I agree, how unromantic and I wrote about this before," I replied) - or even BITING. 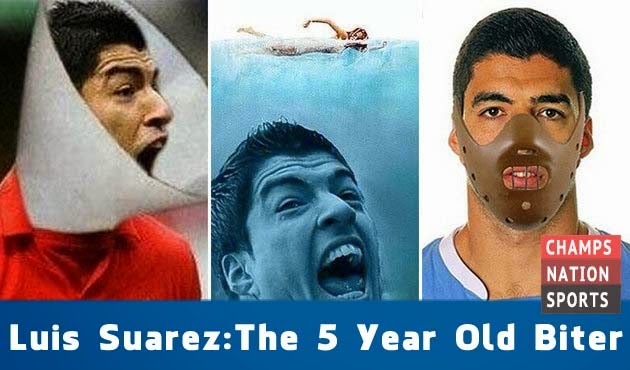 Everyone knows about this by now.  Some even knew about it before it happened - and won tons of money because they placed bets on this happening during the World Cup

We must be losers because we think that winning isn't the most important thing in life.  We didn't pick our favourite teams because we thought they were going to win, but because we have emotional or personal connection to their countries, or because the way they played made us feel proud to be human beings and give us hope in humanity.

July the 1st is not only Canada Day - it is also the day on which Hong Kong people take to the streets every year to protest against the tyranny and injustice of the Hong Kong and Chinese government.  This year it is reported that over 700,000 people joined the protest.  The Hong Kong legislature is unfairly skewed in favour of pro-government forces due to an election process that does not represent the people of Hong Kong.  The Chinese government has recently published a white paper that blatantly refutes the autonomy of Hong Kong from interference from the Mainland as previously promised in the Hong Kong basic law.

For those who don't follow Hong Kong history and Hong Kong politics, this is confusing. Just know this: the Chinese government is trying to win at all costs - first by guile, then by lies, and now by force.  It is ugly.

We were watching the Canada Day fireworks from our condo unit window.  At 10 p.m., fireworks from several locations along the skyline explode over the night sky.  The fireworks are even more beautiful this year.

"In China during national celebrations, they would have even more extravagant firework displays - and the government would recruit dancers, soldiers and performers to put on a big fancy show with everyone smiling so hard that it looks painful to watch.  They would use this as evidence that their country is mighty and powerful and how much the people love the Communist Party.  What winners they are."  Man Yung paused, thinking about the horrors in China right now. "Here in Canada, I feel Canadians really genuinely love their country.  Canada doesn't have to put on a big show to make people proud to be Canadian.  All Canada had to do was to give Canadians a wonderful place to live and grow and be free - that's how Canada won all our hearts and souls."

Happy Canada Day to everyone!