How to run a Super-Duper Authentic, Traditional Milonga in Toronto (Did we mention Super-Duper?) 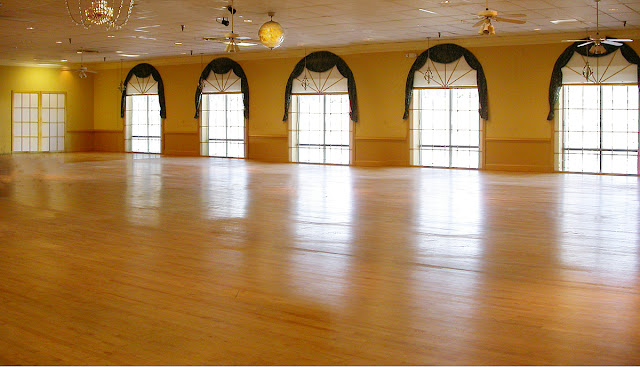 Where did all the people go?

2.  Match entradas to rate of inflation.  Inflation in Argentina, that is.  Raise the price two times in eight months!  Milonga organizers in Vancouver are obviously not savvy enough, still charging $10.00 for entradas across the board - here in Super-Duper we've just raised it $15, and when someone sneezes (or whatever other excuse you can come up with, like oooh, we're going to make someone perform tonight for your entertainment, or we are going to serve sandwiches) it's going to be at least $20!

3.  We pride ourselves on floorcraft and safety.  Everyone has to follow the rules.  That is, except if you are a tango professional.  Or even performers in the traveling tango show.  Then you can dance real big and aggressive and kick anyone you want.  If you aren't among the said elite professionals/performers, don't complain to us.  Not will we not say/do anything to curb the enthusiasm of the high kickers/unruly spinners, we will scoff at you.  You are just lucky we let you in to the Super-Duper milonga, paying $15 for entrada is cheap, you should be paying $30, or even $50 for the privilege of rubbing shoulders here with the Who's Who (Who? I've never heard of them before) of Tango.

4.  We promise you one day, there will be air-conditioning.  Oh, isn't that what we have promised you every year?  Stop whining about the entradas, it goes towards air-conditioning fund.  Maybe.  And anyway, summers in Toronto aren't that hot.  Thirty-four degrees in the shade, that's practically frosty.  Just show up in your underwear and you will be cooler than cucumbers.

5.  Interrupt dancing with a long self-aggrandizing speech.  Who cares if people have tuned out the mumbling wind-baggy self-promoting proclamations of self-glory and self-authenticity and self-traditionality, this is what organizers do in Buenos Aires.  What?  No?  That's not what they do?  They are actually pulling lucky numbers out of a hat for fifteen minutes?  Ooops, shouldn't have cancelled the sorteo without a word.  But don't worry, will make the best of it - less time on sorteo, more time to spend on self-inflating incomprehensible speech.

6.  Toronto DJs not quite good enough for our Super-Duper Authentic Traditional Milonga.  Too "Toronto", too little "Argentino". Get a visiting Argentinian to guest DJ.  Any random Argentinian will do, just make sure he is fresh from Argentina.  If you are cooking a fish you want to make sure that he's jumped right out of the sea onto your plate - same with your Argentinian DJ.  Who cares if he doesn't know that there are supposed to be cortinas between tandas?  It's funny and refreshing if he just plays one vals (not one tanda/tandas of vals, but one vals).  And what innovation, to cheerfully blast at full volume orchestras that sound like Gobbi and/or Gente de Tango all freakin' night.   When the music suddenly stops mid-tanda several times a night, it's ok, gives people time to rest....otherwise how would they have energy to dance the seven or eight folksy/salsa-ry tracks he puts in a tanda of milonga?  Who cares about golden age, this DJ is 100% Argentinian and we LOVE IT.

7.  .....And if anyone complains about any/all of the above on Facebook, delete their ass!

"Deleting your comment is like the worse idea ever," said Man Yung when I told him that our complaint about the insane-asylum guest DJ got deleted in Facebook.  "Doesn't he realize that not just us, but scores of other dancers have legitimate concerns about the way the milonga is being run?  Someone who wishes the milonga to do well will speak up if something is wrong and hope the organizer will take the criticism seriously to improve the milonga.  But others may not be so forthright.  They may say nothing, or even offer insincere praise, like they "enjoyed themselves" when they didn't.  At the end of the day, people are going to vote with their money.  I see that some regulars have stopped attending regularly, the numbers are going down..."

"Oh well," I said, "Milongas in Toronto come and go.  You may be the hottest milonga in town one day, and then closing your doors the next.  An organizer has to be vigilant about keeping the quality of the milonga constant and keeping the regulars happy.  It's the regular dancers who make the milonga, not the visiting instructors/DJs/dancers.  People are not fooled by self-promoting speeches - if they had a bad time dancing at your milonga, they will stop coming.  If you don't make sure your regulars are happy - your competitors are watching you, no-one is invincible and there will be another milonga to take your place.  It's happened before.  Those who do not learn from history are doomed to repeat it."
Posted by Irene and Man Yung at 2:16 PM 2 comments:

Just found this beautiful little documentary by extraordinary Tango teacher and milonguera Elina Roldan.  Elina is a gifted dancer, performer and teacher and a truly lovely person, what a delight to watch her dance and to listen to her words of wisdom about tango.  Enjoy!