I would have written this post over the Victoria Day long weekend here in Canada, but I was too busy on a glamourous Tango "Staycation".

Now, of course we would rather be on a glamourous Tango "Vacation" and we miss visiting our wonderful friends in Buenos Aires, but we have to be home every four to six hours to feed and massage an ancient constipated pet cat.  This one (on the left - I don't know who the guy in the chicken hat is HA!): 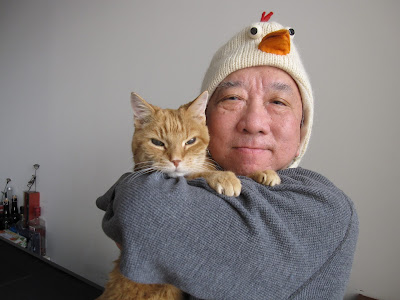 And when we told Manolo the reason behind us not flying to Buenos Aires to visit him, he said "Does he taste good with a side of rice?"

HE WAS JOKING!  About getting rid of the cat and about what Chinese people eat!  Cat Lovers and Chinese people, it's JUST A JOKE, OK?

Well, in any event, Vacation/Staycation is just a state a mind and we will use all our powers of Imagination/Zen/Self-Delusion to bring you the following:

THINGS WE CAN DO ON TANGO STAYCATION THAT MAYBE PERHAPS MAKES US THINK WE ACTUALLY TOOK A TRIP TO BUENOS AIRES:

1.  Wear same set of wrinkle free "travel clothes" for days on end.  Wash them in the sink and hang them all over the place to drip dry OR screw that, wear them for days on end and do not wash them. Did you know merino wool clothing supposedly never smells bad and self-cleans?

2.  Eat pasta and pizza and red meat with abandon and wash it down with gallons of beer/wine.  Gain 5 lbs in 7 days! 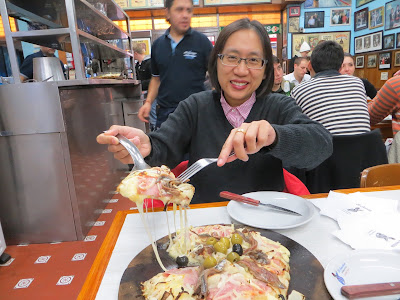 3.  Buy random stuff because that's what people do on vacation.

Or better yet - DO NOT buy random stuff and be good to the planet.

4.  Since cannot buy new tango shoes easily when not in Buenos Aires, do next best thing - resole tango shoes, or wear existing tango shoes in one's possession that don't fit well for that brand new tango shoe feeling. Hobble awkwardly in ill fitting tango shoes at local milongas, it makes it feel like you are dancing on unfamiliar floors!

5.  Dance all night. Or at least until 1 a.m. midnight.  Because we need beauty rest + have to go home and massage the cat.  By the way this past week (in Toronto!) we danced Friday, Saturday, Sunday, Tuesday and Wednesday.  On Monday and Thursday we massaged the cat MORE.

6.  Forget to put on sunscreen because so busy/exhausted.

7.  Go and see the sights and eat the eats in Scarborough, food capital of the world.  Or don't, and nap all the time when not eating and dancing because old and exhausted from dancing + massaging the cat.


8.  Watch soccer matches broadcast in a non familiar language.  There are lots on Youtube.   Brings back memories of watching soccer in Spanish in Buenos Aires hotel room (when not passed out from exhaustion or doing laundry in the sink).

Why, don't other people argue while on vacation?

Why, don't other people answer work emails while on vacation?  How else can I make sure my inbox is clear and I'm up to date?

There must be more stuff we can do to add to the list to make our "Staycation" sound more exciting but I'm tired from dancing/writing/massaging the cat and need a nap now.

I replied to Felicity's comment and realized we had been dancing at the same milonga... on different continents

Yep.  What a coincidence!  Felicity's original comment (to the previous post "Why the Cabeceo is important) is in black, and my responses are in blue:

Comparing notes, my reasons for not dancing with (any) guys this weekend:

Agreed.  Getting rare in Toronto too.  Toronto full of hot headed flingers.  However have still a handful of leaders I still enjoy dancing with.  I am often tempted to pray (with incense and crispy BBQ pork offerings - actually, doing complete opposite of the evil eye ritual) that they do show up at milonga but realize that praying is completely useless due to my low dance popularity quotient.

2. I like dancing with the guy but he just danced with someone I can't bear and so is contaminated (at least for that day). This is a fairly new one on me. It surprised me too!

Actually this happens to me after Man Yung danced with someone who forgot deodorant or has a problem that deodorant cannot fix.  I have to get him to change before I can dance with him.  Otherwise the urge to vomit will override ability to follow.  Man Yung either has nasal blockage or likes B.O. of strangers does not understand about the fuss I am making.


I have also been put off by the smell of green peppers that attached itself to a leader I like to dance with from a follower I dislike.  Go figure.

3. I really like dancing with the (visiting) guy I've known for years but he has been sending confusing messages during the last year at the two milongas where we last met. I don't know where I stand so I won't look or say anything about dancing even though we're sitting next to one another and (finally) talking again...

I’m a straightforward person, I don’t understand leaders who send out confusing messages either.

I prefer to dance with someone who is as consistently eager to dance with me as I am with him.  Not BS "Oh I LOVE dancing with you!" and then when there are other "more preferred" followers in the room he forgets to cabeceo or even say hello.

If he is "hot and cold" he better be some hot stuff in Tango.  No wait - EVEN IF he is some hot stuff he can go stuff it.  I'm too old for this game playing s***.

Reasons for not dancing much with women this weekend:

- At two of the milongas: no space / chaos. Space alone wouldn't necessarily be an issue if it weren't for the snails-pace ronda and dangerous floorcraft. Couples were dancing for themselves, not aware of the couples around them. Or were but didn't care, or couldn't dance well enough to manage. I was prevented from moving, was bashed many times, squeezed, tailgated and cut up by guys. I was kicked and scraped by the slim, well-dressed woman several people tried to tell me was a good dancer.

Luckily have not had too much bad luck or accidents while leading on crowded and crazy floors.  I have feeling guys in Toronto are more considerate to women leaders, well, at least to me.  They don’t generally bash into me and my partner unless by pure accident, I have a feeling they have their eye out for not bashing.  Actually, apart from one or two really rotten apples, leaders on a whole in Toronto have become more considerate on the dance floor in the past year.

However, that being said, I think we have the twin of the slim well dressed woman "so called good dancer" here in town.  Or perhaps it is the same woman?  She has the longest legs and most honking huge feet with stilettos the size of machetes on said feet.  She also flails and kicks highest with the most abandon.  Frenetic displays of reckless high kicking signal "I'm a good dancer", like how red and blue bottoms on Mandrill monkeys means "YEAH BABY! Sizzling white HOT!"?   What is this (tango) world coming to. Milonga organizer had to announce “Keep heels on the floor” but the rockette apparently is deaf because she was still slashing her heels up and down for hours after that announcement.

Other cavorting, spinning and leaping Mandrill monkeys on the dance floor were noticeably excited by her tango courtship display. 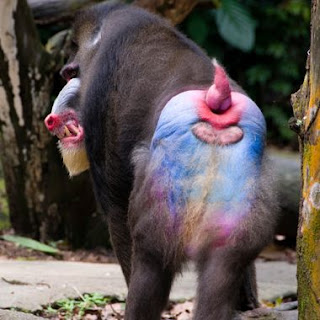 OMG this CONFIRMS we were at the same milongas.  A DJ played Maglio (and equivalent) all friggin’ night too.

- I'm not convinced enough she wants to dance with me to want to risk a clear look (from my seat).

Yep, I’ve had ladies say they want to dance and then not even try to cabeceo.  Talk about ambivalence. This has been ongoing for a few weeks now.

- That quiet, good-dancing girl I like isn't looking my way. She refused / avoided me once. I won't invite her again unless she makes it really clear that she wants to dance.

You and I, we must be trying to dance with the same girl.  Sometimes I think she just wants to dance with her favourite guy leaders, or doesn’t want to dance with a girl in front of certain guy leaders who would scoff at women dancing with women.  That’s ok.

I'm the same: My best lady friends in tango know that I'm not available for leading if my favourite guy leaders are available.


- She could be looking but I don't want to dance milonga / vals / this particular tango tanda.


Actually, I’m pretty much up for anything at this point.  Have heard so much Maglio had to make decision: either dance to the friggin' Maglio, or not dance at all and waste $15 entrada.

PS:
I danced 6 tandas over three milongas this weekend. All with women. Good music is always a pre-requisite but curiously, the reasons one does dance are not necessarily the converse of why one doesn't dance:

1. We smiled as she came in and she sat next to me. She was a nice person and turned out to be a good dancer.

2 & 3 An experienced lady told a woman or women I didn't know near me in my hearing that I was a good dancer and she should dance with me. So I risked inviting one and later the other.

Solid dance reputation being built this way.  It's great!  I hope that I'm getting positive reviews too.  Rather than people whispering "OMG avoid her she sucks" :-(

5. A good dancer I didn't know sought me out with her eyes

You are better at the cabeceo than I am.  I still have to engage in conversation with ladies at beginning of the evening about willingness to dance later and THEN cabeceo to seal the deal later.


6. A woman I've seen dancing well for years I thought had looked my way some time last year but I hadn't liked the music at the time. I invited her this time.

Thanks for taking the time to comment Felicity!  I hope we will really meet one day at the same milonga and we can cabeceo each other for sure :-)