My Japanese hair stylist recently moved her salon downtown.  Since she is the only one who could make my bowl cut more like Mia Wallace and less like Edmund, Duke of Edinburgh (or, at the very least, an acceptable compromise between the two - I have tragic hair), I followed.

I have been with the same hair stylist for so long that we have run out of things to talk about.  Or so I thought.  Traffic that day had been messed up by the heavy rain - but Man Yung still got me to the hair salon on time.  I was one of the only two customers that morning who didn't miss their hair appointment.

"Did you drive?" asked my hair stylist.

"No, Man Yung did," I replied.  And added: "I would drive, but Man Yung won't let me!  He claims that the way I drive scares his pants off!"

"Oh my god, my husband is exactly the same way!"  She mimed gripping the dash with both hands and mimicked the stretchy long Munchavian face of pure terror.  "Whenever he is in the passenger's seat he is constantly going berserk and screaming, 'You're going too fast!  You're going too fast!"

"Tell me about it!  I never go above 10 over the speed limit, and yet Man Yung keeps on thinking I've floored it.  How about this one: Does your husband also think you are following too close?"

I think men like to complain about the way women drive.  Man Yung likes to point out that one friend of ours goes from zero to sixty in two seconds - within school zones.  Another drives at exactly the speed limit in the fast lane (regardless of the honking and hollering of the drivers behind her) because the lane next to the curb 'is too bumpy'.  Yet another languorously waits for all left-traveling traffic to pass when turning left out of a private lane - with the back half of her car blocking all oncoming right-traveling traffic.  Road Rage? Everyone hates the 'Grey Power' lady.  And Tailgating?  Apparently the new international pastime of Womenkind.

Sorry to break the news to all you guys - statistics disprove all your "anecdotal evidence".  Women are actually safer drivers compared to men!  And don't women get lower car insurance premiums? (Yes they do)

But here again, the chorus of frightened men: "I saw your bad driving with my own two eyes!"

Women are wonderful drivers - until that is, they are bombarded with the negative energy (and distracted by the high-pitched shrieks) of the freaked out men scrunched down next to them in the passenger's seat gnawing fretfully on all their nails.  I tell you, that kind of fear is contagious.  When Man Yung gets that way, it makes me so nervous he's lucky I don't wrap the car around the nearest stop sign.

So chill out!  Give us women some trust.  Don't buy the stereotype.  After all, when you are driving - whether it's on the road or on the dance floor - WE trust YOU.  When we are dancing, we sometimes even close our eyes and hand ourselves over to your lead, body and soul.

You have our trust - there is therefore no excuse for being an idiot driver.  This means that leaders should be extra careful to treat followers well on the dance floor.  No driving under the influence.  No going at a hundred above the speed limit.  No sudden braking or cutting into lanes.  No bumping into or elbowing other couples to shove them out of the way.  And for the acrobats among you - no wheelies, no burnouts, no bar-tricks, no hyperspins, no switchbacks... 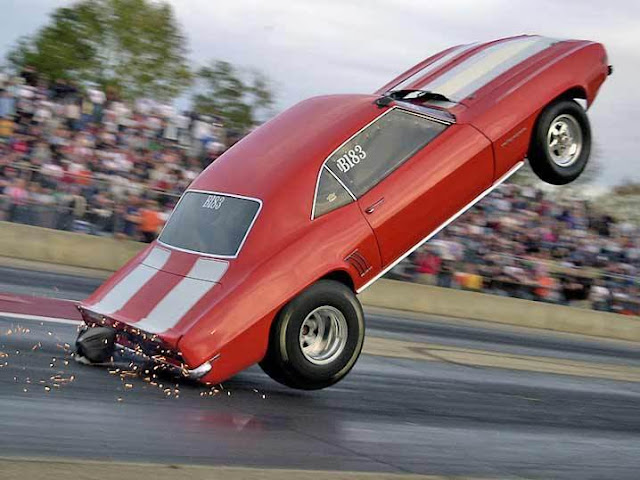 No! No! No! No! No!
And everyone please, no tailgating!  You must leave sufficient space in between yourself and the next couple.  If the floor is uncrowded, this means lots and lots of space. The last thing you want to do is be all over the couple in front - when there are only two couples in the whole room.*


* That happened recently at one of the milongas we were at - we danced a whole tanda with this couple right on our tail.  It was midnight, and there were only two couples left, total, on the dance floor.  So annoying!  Then Man Yung had an idea.  He accelerated right around the room and started tailgating the guy who had been tailgating him.  Otherwise how else would that guy ever get it?
As for really crowded conditions - that is not an excuse to jam yourself right up against the people around you either (no matter how strong your urge to hump everyone around you).  At least one step's space in all directions around each couple (make this a half step in hyper-crowded Buenos Aires milongas) - left, right, forwards AND backwards* - is sacred space.   Don't step into it unless in a case of emergency.  Just like cars in a traffic jam, everyone should have a little wiggle room of safety. On the dance floor, it's in order so that couples could turn and do giros on the spot to wait for space to open up in front of them in the line of dance.  In traffic, it's just enough room to turn out and change lanes and perhaps even exit - especially if the traffic is backed up on the 401 from Mississauga until Windsor!

* Another dumb thing we've seen on the dance floor is when clueless leaders, having read some half-baked tango rulebook somewhere, dance right up behind another couple - and then look outraged when the other couple crashes into them when turning.  "You were stepping back!" they glare indignantly.  No silly, that was a turn.  And guess what?  You were tailgating.
Posted by Irene and Man Yung at 9:52 PM