We are busy on Fridays in Buenos Aires.  First, we must go to Osvaldo and Coca's class at El Tacuari in San Telmo.  Then, we must follow Osvaldo and Coca wherever they are going after class.

So, jet lagged and still tired from our flight from Toronto, we tag along with Osvaldo and Coca to the barrio of Flores to popular milonga La Baldosa.  We were looking forward to a nice relaxing evening out catching up with our teachers and perhaps getting a little dancing in.

"Don't sit there like a lump - dance, nene!"  was Osvaldo's advice to us.  So what does Man Yung do? Man Yung goes and dances with Coca:

Man Yung dancing with Coca at La Baldosa - a tanda of Troilo with Fiorentino
Man Yung is always nervous dancing with Coca.  She is his idol - his maestra.  "Mucho miedo!"* Coca says after the tanda, laughing.  Look at how calm and patient Coca is - she is taking care of Man Yung on the dance floor!  The hallmarks of a world class milonguera: feeling, tranquility...security.  And of course, magic red tango shoes.

Here's more magic:  Osvaldo and Coca dancing at La Baldosa.  Man Yung is following them with the camera. Of course they never get to finish any song - everywhere they go they spot someone they know.  And off they dart - to kiss and say hello.  So many distractions, you say! But when they do dance, their concentration on the music and each other is absolute:

Osvaldo and Coca - Social dancing at La Baldosa
So we are sitting there enjoying the milonga and talking to Osvaldo and Coca - when Osvaldo suddenly starts up.  "What do you want to dance to?"  Uh-oh.  Deja vu of what happened at Circulo Apolo in March.  This time Osvaldo and Coca doesn't even pretend that it isn't what it is.  They want us to perform at their tribute.  "But I'm scared!" I said.  "Tonta!"* Coca says.  They figure that what we are doing is acceptable to them - and that will be just fine and dandy for everyone else at La Baldosa, one of the most important milongas in Buenos Aires.  I feel my throat closing up and I'm starting to have a fever and perhaps some kind of rash - allergy to exhibitions, perhaps.  If they call an ambulance now I'll be able to miss the performance altogether!

* "Silly!"
No such escape hatch.  "So what do you want to dance to?" asks Osvaldo again.

"Poema!" yells Man Yung.  A tribute to Osvaldo and Coca means dancing one of their signature songs. He didn't even need me to translate.

So here we are dancing to Canaro's "Poema":

A little "Surprise" for everyone - we go first and perform to "Poema" at Osvaldo and Coca's Tribute.
Osvaldo filmed and provided the commentary soundtrack - consisting of a lot of mirth, giggling and cackling!
Here's a little something for Bob and Viv - the gentleman whom we greeted at the end of our performance is none other than your maestro, Jorge Garcia!  We have known him (and admired his wonderful dancing) since Elba Biscay's birthday party in 2008!
Looking at it afterwards, we cannot fail but be amazed - not at us (thank god we got some applause), but at Osvaldo and Coca's confidence in us.

"We had just got off the plane. The only dancing that Osvaldo and Coca had seen of us was in class... they offered no advice on performing and no coaching whatsoever.  How could they be sure that we weren't going to be an absolute and utter embarrassment on the dance floor?" Man Yung asked me.

I thought about it for a second.  "I think Osvaldo and Coca have a lot of faith in their opinion of us.  Sure, we may be just a couple of silly ducklings.  Nevertheless, it's enough for us to dance simply, if we could dance with feeling and musicality.  To Osvaldo and Coca, it's good enough for an exhibition, because that's what tango is about.  That's what they have been teaching us all along.  We didn't need to rush out and get into swan costumes and start practicing pirouettes if that's not what we really were!"

Now we've got that out of the way, please enjoy the rest of the performances from that night!


[We emailed Pedro Ochoa to tell him that we had posted the video of his performance on Youtube as we had promised to do when we talked to him and his partner Fatima at La Baldosa.  He emailed us back a very nice email - apparently he has toured in Montreal, Canada before, in 2008 and 2010.  He is looking forward to returning to North America again, hopefully in 2011.  You can get more information on Pedro Ochoa at his website www.pedroochoatango.blogspot.com and Myspace page for Z Club Tango Trio www.myspace.com/zclubtangotrio]

[Hey Bob and Viv, we think you would like this! - a gift from Irene and Man Yung] Of course, fleet-footed Jorge Garcia and his lovely partner Susana Soar brought down the house with their electrifying milonga:

Photo op!  Jorge and Susana very graciously granted us an opportunity to photograph us all together after the performances ended: 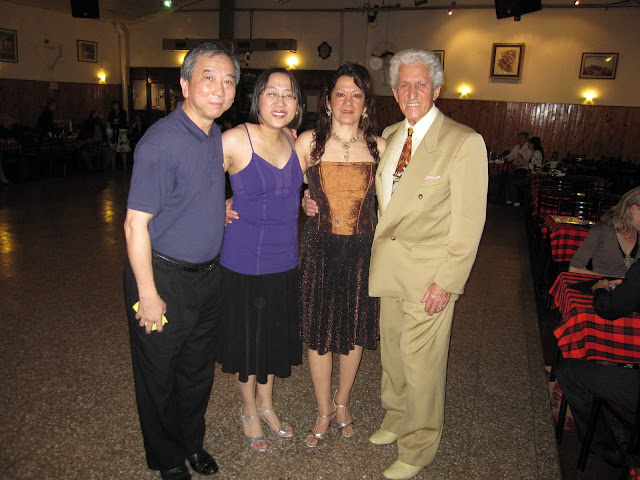 And last but not least, Osvaldo and Coca concluded the evening's exciting performances with their beautiful rendition of Orquesta Tipica Victor's "Carillon de Merced":

And then a little extra as everyone took to the floor in a group dance.  Partner exchanges permitted!:


* Please note that the ladies (except for Coca) did not call each other before the milonga to coordinate their shoes.  It is pure coincidence that all of us are wearing silver stilettos!
Dear Reader(s):  You may be completely exhausted by the cornucopia of tango video goodness in this post - but don't throw in the towel yet.  There's more coming!  Don't say that we aren't doing our best to bring Buenos Aires to you, wherever you may be in the world. 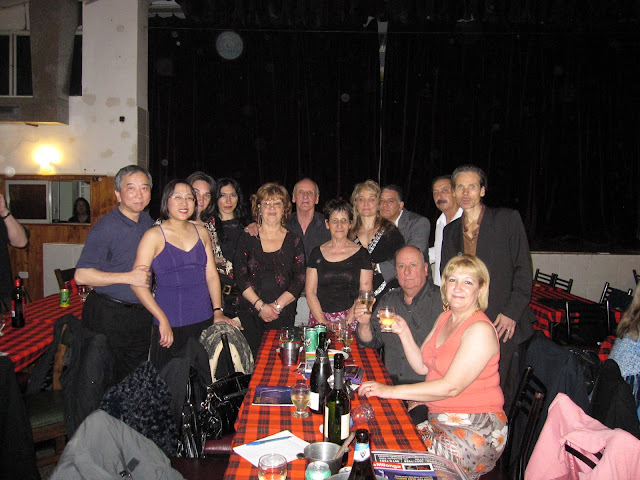 Thanks for the great post
It says on the Tacuari school schedule that Osvaldo and Coca teach a salsa class on Friday. Is that right or it it a mistake? Do you know where I can take a tango class from them?

Hmmmmmm.... so that's what we have been learning from Osvaldo and Coca! We thought what they were teaching was kind of unorthodox for tango ;-)

Just kidding! I think El Tacuari's website has a typo. Osvaldo and Coca teach tango/milonga/vals there on Fridays. Unfortunately, that's appears to be the only classes they are teaching at this moment - but if you get a chance, take all the classes you can with Osvaldo and Coca that you can grab hold of. They are wonderful teachers, and wonderful people.

Thank you for posting the videos!
It was a great night at La Baldosa, and it was a great pleasure for us to dance for Osvaldo and Coca, our teachers.
Regards from Buenos Aires and congratulations for the blog and for your performance.

What a magical evening it was! Thanks for letting us post the video of your wonderful performance, all the best and hope to see your tour in North America soon!

wow--now that post packed a punch! Love the vids--especially of you guys dancing! wonderful!

We're glad you enjoyed this post - it was only our second night in Buenos Aires and already we were exhausted from all the excitement!

There's more to come very soon, lots of videos, way too many adventures. And we haven't started on our Buenos Aires 2009 series yet...

Thank you for lots of videos and taking us along for the ride.

We're glad you enjoyed this post and the videos - as we promised, there's more. Unfortunately, we didn't get any opportunity to film Alberto and Paulina during this trip. Nevertheless, don't be disappointed - Alberto says he is planning to return to North America in the spring of 2011. If you didn't get a chance to catch him on his recent tour this fall, there's another chance in the very near future!

As usual Jorge Garcia was not only brilliant but the first to congratulate the extranjeros.
Not that you were not all brilliant, but for me he just has that something special.
I know it was a nerve racking experience for you giving a demo in front of Argentines, you will not forget this night.

Hope you are both finally settled in after your trip! We thought you'd enjoy the videos of our night in La Baldosa...

A couple of things - firstly, Maestro Jorge didn't congratulate us because we were foreign. He congratulated us because he has known us.... since 2008. But perhaps your hypothesis is right about him being the first to congratulate all extranjeros who perform in Buenos Aires... it's just that it's so rare that extranjeros get to perform, we can't really test your theory :-)

Secondly, La Baldosa, being such a popular milonga, was really a mix of foreign tango tourists and Argentines. Judging from the last time we performed in March at Circulo Apolo, in which the spectators were 100% Argentinian - we would actually get more enthusiastic applause if there weren't any foreigners in the audience feeling bored about what we were doing on the dance floor. Foreigners, from our experience, are usually waiting for the high kicks, flashing panties and power blender turns before they could be dazzled into clapping. This is the reason why we refuse to perform in Canada - not having a sufficient quota of such amazing acrobatic skill means that any performance from us in Toronto would be met with the stony sound of silence with a lone cricket chirping.

[We're just pulling your leg. Oh, thanks for the invitation to your practica - see you guys there! Wait a moment, how long do you think it will take for the taxi to get to Wales?]