I already knew that Man Yung's two older brothers were really rockin' dancers.  "They'd descend into the nightclubs of Wan Chai and take over the dance floor!" reminisced Man Yung, talking about the good ol' days of Hong Kong in the 60's and 70's.  "They had so many fancy moves, the women were catfighting each other for the chance to go for a spin with them!"

"Nah, I was communista and so enthralled with Chairman Mao, I scoffed at their decadent immoral Western style capitalist entertainments."

Besides, Man Yung would have looked pretty much out of place on the dance floor waving the little red book and wearing communista duds instead of wide-lapel polyester suits and bell bottom pants. 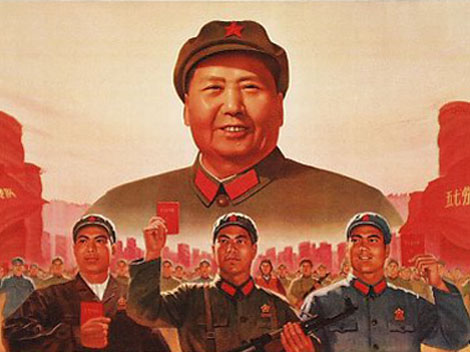 Man Yung as "Disco Mao"?  Unlikely.
We were just in Hong Kong last week visiting relatives.  Imagine our surprise when we found out that Man Yung's two younger brothers were also dance maniacs.

"Didn't you know?" said my sister-in-law, talking about my two brothers-in-law.  "They were so gangsta' [I'm paraphrasing here - she didn't really say "gangsta'", but you get the idea]!  They were always cutting the rug at all student parties in school!  The Cha-Cha, the Rumba, the Twist - they knew how to dance everything!"

"And what were you doing while this was going on?" I asked Man Yung.

Man Yung was so stunned by the revelation that ALL his brothers were dancers it took him a few seconds to respond.  "Oh.... I had moved out and was working already, so I didn't keep track of what my younger brothers were doing!"

Of course, Man Yung is now making up for lost time and dancing non-stop in all the milongas he attends. And instead of knowing how to dance all the different dances, he's been known to dance Tango to all different types of music.*


* More efficient and easier, I must say!
For all those of you out there who don't think that it is remarkable to have several dance geniuses in one family - heck, were we not astounded by the dancetastic groovaciousness of the Jackson Five at one point? - let me tell you, it is especially rare in Chinese families.  Chinese people are, on the whole, so conservative and introverted it is impossible for them to respond in a meaningfully uninhibited way to any music with a beat. For example, no-one in Irene's paternal or maternal family can dance (no, no, Mom and Dad, despite all those Ballroom lessons, I don't think you can dance either - you have to get the lead and follow thing sorted out first!)  No-one in the families of Irene's Chinese friends can dance.  No-one in the families of Irene's Chinese friend's friends can dance.  And so on.  In fact, it is quite arguable that Irene is completely unable to dance, and she is going along with all of this just to be polite (while thinking about Wal-Mart).

Indeed, watching some Chinese men dance, you would think they were deliberately conforming to the non-dancing cliché and trying to do everything - you name it, "impressive figures", stiff unnatural "tango salon standardized" walking, "yummy embracing"*, "pretending" to be "_____________" i.e. trendy Mr. Tango Salon Superstar, etc. - everything that is, except moving to the compas.**


* What, you could actually do this?  I tell you - yes you could - and it's one of the most creepy things I've come across in Tango, even creepier than face dancing!
** In the words of Hong Kong celebrity Food Critic Choi Lan:  Of course there are exceptions.  Some Chinese tangueros can forget all of the superficial surface things and just focus on the music. And - "The Chinese tangueras were all lovely dancers," said Man Yung.
We look forward to unearthing more evidence of dance DNA in Man Yung's family - maybe a great great great granduncle who was an expert at the Electric Slide and the Mash Potato?

Bruce Lee (!!!) dancing Cha Cha in an old Cantonese movie (watch him starting at around 0:30).  For all of you who believe that you are stranded in the purgatory of "Chinese people can't dance" cliché - if Bruce Lee can dance to the compas, yes, you too can also dance to the compas!  Just leave all that other stuff that is stopping you from really dancing behind!
Posted by Irene and Man Yung at 12:16 AM 3 comments:

February performances by Martha and Manolo and Osvaldo and Coca

Our teachers Martha and Manolo and Osvaldo and Coca have been keeping busy with their performance schedules in Buenos Aires!

First up is Martha and Manolo - performing a milonga with the Colonizados orchestra.  They have collaborated many times over the years and they always enjoy performing to the rhythms of this band.  The typical audience for Colonizados is young and hip - but they never fail to go wild with their appreciation of the musical, heartfelt Canyengue and Milonga of Martha and Manolo:

Then there's Osvaldo and Coca - at the Misterio festival.  We called Coca and spoke to her this week.  "Guess what, we performed at La Viruta!" she said.  "We've already seen the video!" I replied.  "But we have a question, why did Osvaldo say his knees were trembling before the performance?"

"Oh, you saw the video!"  Coca loves that we have been keeping up with what they have been doing by searching for their recent videos on the internet.  "Osvaldo was feeling nervous because there were so many young people at the festival - the future of tango - and we are of the older generation, we don't know whether they would accept our way of dancing at all.  But don't worry, it was ok!"

We think it was more than just "ok"!  They had a wonderful success with their performance .  It's great that Martha and Manolo and Osvaldo and Coca are reaching to the new generation of young people in tango with their performances and classes - all us newbies can see with our own eyes how to savour the music, to make the dance meaningful, and not lose the ways of tradition.  The old maestros continue to pass on the torch everyday to enrich this beautiful thing we call Tango.

Posted by Irene and Man Yung at 5:01 PM No comments:

Email ThisBlogThis!Share to TwitterShare to FacebookShare to Pinterest
Labels: Martha and Manolo, Osvaldo and Coca 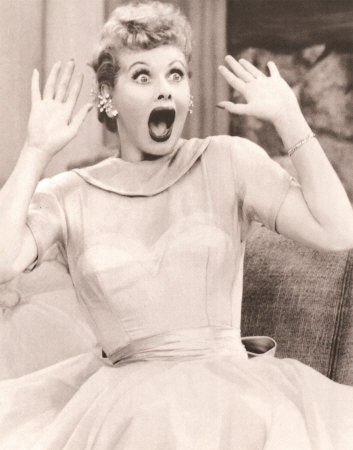 Our favourite waiter came to our table as we were paying the bill after another spectacular meal today.

We looked at him in horror.

And it gets worse.  "By the way, I think the chef is quitting too."

Now, where are we going to eat?

The older we get, the less we appreciate surprises.  Not that we particularly liked surprises when we were younger.  Back then, we were just healthier and less likely to get heart attacks when surprises were unleashed.  So Mom, if you are reading this - the "Secret Santa" reindeer sweater three sizes too big that I received (when everyone else got Cabbage Patch kids and Mr. Men colouring sets) was not the "surprise" I really wanted to experience.

Generally, we suspect that the ratio of "good surprise" to "horrible surprise" is about 1:100, despite all good (or not) intentions of the "surprise-giver".  Yet, people persist in promoting their surprises to us like, as the Cantonese expression says, "It's your lucky day!  Here's advantage for you!"  How about this thought: Saying something is a "Surprise!" is like extravagant gift wrapping - the item lying inside all those bows and sparkly paper is more likely to be a cheap Dollarama bath set that would give you hives - than a brand new Corvette.

So...please, no more surprises in Tango!  We don't want to go to our favourite traditional milonga and find that the orderly, pleasant and considerate regulars have been replaced by hyperactive Nuevoists hell bent on flipping all the drinks off the tables with their high kicks.  We don't want to settle into a dreamy tanda of Di Sarli with Duran only to find that track 3 and 4 of the tanda are Canyengues, or a contemporary "interpretation" of Di Sarli.  We don't want to look forward to a pleasant night of dancing only to find that the floor is covered in plastic and pivoting on it would wrench the ligaments right out of your knees (yes, that has happened too in Toronto).

And most of all... we don't want surprise DJs, or surprise performances!  TELL US if you are going to have such-and-such a DJ, we have heard most of the DJs in town and some of their music gives us headaches.  Ditto "surprise" performances by dancers we don't want to watch - we don't care if they have been regular attendees of your milonga or if they have selflessly devoted themselves to the promotion of Toronto Tango for decades - all the good words in the world would not justify your taking away our right to choose whether to watch crap, or not watch crap (and have to wash out our eyes afterwards).  If you are going to invite the Crazy Chicken Lady or the Hokey Pokey dancers (or even Fabio) to perform, we think we have the right to know first!  We have to drive an hour downtown to a milonga, look for a parking spot for another fifteen minutes, pay for parking, and then walk ten minutes to the venue in subzero temperatures - the last thing we want is an unpleasant "surprise" sprung on us at the last minute to ruin our entire weekend.  We could have avoided it all and had a better evening at home, you know!*


* "Hey, just received an email from tonight's milonga organizer!  Thank God, ___________________ [very good Toronto Tango instructors and performers] are going to perform tonight.  Why didn't they say so earlier? All that hinting before about "Surprise!" by the organizer was putting us off - NOW, knowing who is going to perform, we can go to tonight's milonga.  If we didn't receive this email - and given the dismal "surprise performer!" track record of this milonga, I shudder to think the last performance we saw there - we would really have stayed at home!"**
** "Please God, we hope that the organizer has abandoned all "Surprises!" and there will, truly, be no surprises tonight!"
Posted by Irene and Man Yung at 3:28 PM No comments:

Performances in January - Martha and Manolo and Osvaldo and Coca

Here are some wonderful performances by our teachers Martha and Manolo in Gricel in January - their very distinctive and musical Milonga and Canyengue.  Watch them bring down the house!:

We're glad to see that Martha's leg is much better - she had a slip and fall back in October just before we visited them and has luckily recovered fully.  As for Manolo - he's turning 80 this year!  Look, he has the speed and footwork (and the corriditas) to match any twenty year old tanguero.

Another lovely surprise we got from Youtube is this video of our teachers Osvaldo and Coca performing at a benefit held at La Baldosa at the end of January:

Does anyone know the name of this tango and the orchestra?  We tried calling Osvaldo and Coca today to ask them but they didn't pick up the phone (perhaps they are having their siesta?) By the way, from the weather report and the telephone conversations we've had with Martha and Manolo and other friends in Buenos Aires, it's really sweltering hot in Buenos Aires so yes, probably a siesta in the afternoon is a good idea!

Here's Osvaldo and Coca in a recent interview with Junando Milonga - wearing their summer clothes, with the background noise of all the whirring fans.  There's four parts, but all in Spanish:

We haven't had a chance to watch all the parts of this interview yet (it's going to take some time, my Spanish isn't that great!).  Wishing we were in sunny hot Buenos Aires instead of here in wintery Toronto!
Posted by Irene and Man Yung at 3:28 PM 3 comments: