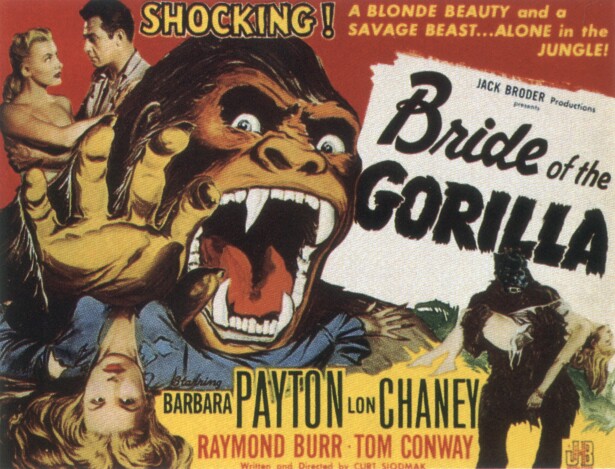 Ah...the Gorilla.  King of all Primates.  Lord of the Jungle.  Did you know we share 95% of the same DNA with these powerful great apes?  I have been in total admiration of the mighty Gorilla ever since my high school teacher took us on a field trip to see "Gorillas in the Mist", starring the beautiful and enchanting Sigourney Weaver (who also coincidentally starred in another of my favourite movies, "Ghostbusters").  Yes, I am not ashamed to say that I, too have submitted school essays entitled, "When I grow up... I want to be a Gorilla".

Strangely, the Gorilla has been evolving very rapidly over the last few decades.  Is it global warming, genetically engineered food, or reduction in natural gorilla habitat due to the greedy land developers acting in cohorts with corrupt chinese officials?  Whatever the cause, King Kong (or Donkey Kong) is no longer content to wildly swat at swooping combat planes from the top of the Empire State Building, or throw colourful wooden barrels at intrepid jumping Italian plumbers.  No, indeed.

Nowadays, you see Gorillas learning to stand and walk on their own hind feet:


Go, go Ambam!  You have a better walk than most Campeonato contestants!
Yet other clever Gorillas are learning to participate in rampant consumerism.  Watch this bunch open their x'mas presents:

Sorry, no iPad - the only thing in the box was a handful of peas.
Yet others are expanding their music talents - by learning to play the Keyboard.  And the Drums.  Soon the Gorilla Boy-Bands will be scaling the charts as rapidly a big monkey climbing a skyscraper:

Unknown Gorilla tops even Koko - plays the drums just like Phil Collins!
While selling Cadbury chocolates!
And then, there's the crazy Breakdancing Gorilla of the Calgary Zoo:


Has better body to feet coordination than most Tangueros
Gorillas have evolved so far, they have even gained insight into the fact of their mortality.  It is a sad but eventual reality for all us living creatures - but before this, only we as humans were aware of it. With the crossing of this last frontier, there is really very little to differentiate what is human, and what is monkey:

Scientists teaching a Gorilla (and a handful of rabbits) that it will die
With the foregoing advancements in Gorilla evolution, it was only a matter of time before Gorillas will learn how to dance tango - and dance it even better than us humble humanfolk!  After all, Gorillas have longer limbs, better strength and stamina, more acute hearing...These talented animals are naturals for the physically demanding art of the Nuevo, with its death-defying acrobatic spins and drops, incomprehensible musical cacophonies, and American-football style tackles into crowds of bodies on the busy Toronto Tango pista.  And they don't even need to learn how to lead - flinging their flimsy human partners across the room is as easy as lifting a finger.  New Tango is dead?  Bah, humbug!  Not with the Nuevo Gorillas holding the fort (and teaching classes most weekdays at your local tango extravaganza).

"OWWWWWW!!!!" said Man Yung.  He just got collided into, asteroid-to-earth style, right in the middle of a tanda of milonga.  He whipped his head around and caught sight of the hulking tanguero who had barreled into him - and who continued to spin merrily along, oblivious to the collision and still pushing, pulling and shoving his modern tanguera Fay Wray like she was a ragdoll in a tango dress (and leggings).

"That guy didn't even have the courtesy to stop and say sorry!"  said Man Yung, exasperated.

I rolled my eyes.  Surely Man Yung is not so naive, having been marinated in Toronto Tango for as long as he has?"

"Of course he isn't going to say sorry.  He's an instructor - so he expects the crowd to part for him like Moses in front of the Red Sea.  In addition, he isn't like you and me - he's a Gorilla in a t-shirt.  Everyone knows that while Gorillas have mastered sign language, they haven't gotten to the part where they teach them how to apologize for bumping into people on the dance floor.*"