Why one does not dance to "Gardel" 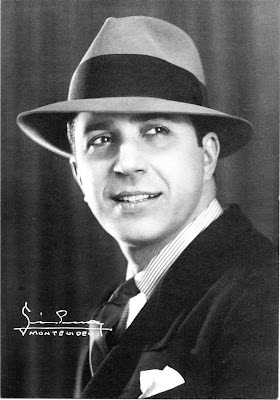 Man Yung and I know next to nothing about Carlos Gardel. We got into tango because of the allure of the dance - I know that it is kind of restrictive but we haven't preoccupied ourselves so far with tango that is not danced, i.e. the music of Carlos Gardel.

I know that Carlos Gardel is a legendary, iconic figure - it is said that without him, there would be no tango as we know it. Those who love him say that "Gardel sings better every day", even though he died in a plane crash in 1935. And this, a quote by Alfonso Laso Bermeo in an article on the website of Todotango:

Gardel is tango and tango is Argentina.

I was listening to some tangos that are not danced the other night - Ignacio Corsini (Angel Vargas sings many of the same songs and in the same style), Augustin Magaldi - and trying to get Man Yung to dance to them even though they don't have a regular danceable compas, just to see what he can dance to. Nothing difficult really, except both of us had to be very in tune with each other to manage the changes in tempo and the pauses. And while going through the tracks, I started playing some Carlos Gardel.

The last time we had listened to tangos by Carlos Gardel was two years ago, in the car on a Thursday night on our way to a practica. At that time, perhaps because of the distracted situation we were in, or perhaps because we were still very much novices at tango, or perhaps because we had not yet traveled to Buenos Aires - we didn't think much about the music we were listening to, except that Gardel had a nice voice, and it was a pity because the fidelity of the music was very poor. In any case that was the last time we listened to Gardel.

So, returning back to the other night, I was playing some tangos by Gardel and Man Yung happened to pass by. He was stunned.

Man Yung was immediately enraptured with the texture and feeling of Gardel's voice.

Although I told Man Yung about the "prohibition" that the Argentinians have about dancing to Gardel, Man Yung felt inspired by the music and wanted to try dancing to it. We danced to "Rosas de Otono", "Bailarin Compadrito", "Volver", "Por una Cabeza" and "Mi Buenos Aires Querido" - and each one felt more glorious than the last.

Dancing to Gardel is truly a beautiful thing. Although we shuffling around on carpet at home to music that was being transmitted (poorly) through a computer speaker, Man Yung really felt the music. And, as Man Yung put it, "It's music that teaches you how to feel and listen to tango".

So why is there a prohibition about dancing to Gardel? These are some of the conclusions we have reached, as of today, four years and five months into our tango journey:

1. You don't dance to Gardel because it is really difficult to dance to.

Well, for one thing, it's really hard to dance to Gardel's music. It's not created for dancing, and it doesn't have a regular danceable compas. Most people would fall over their feet trying to dance to this.

2. It is an insult to Gardel, Tango and Argentinian culture to dance badly to Gardel.

If the dancers are not up to par, if they don't know how to listen to the music and dance to it, it would be an insult to Gardel and to Argentina to let them dance to this music. Can you imagine people doing flashy attention grabbing moves to Gardel? Combinations from Cosmotango? Way too many adornments? As Alberto Dassieu would say, and it's one of his pet peeves - "People on the dance floor trying to show things they do not feel." Because Gardel's music is so much about the feeling it conveys.

3. Not even the best dancers in the world would want to mess with Gardel.

We started talking about the dancers we felt had sufficient musicality and skill to deal with the emotion and difficulty of dancing to Gardel.

For Man Yung, the way that Gardel sings makes all the art and artifice of singing disappear. Gardel is not singing, but speaking right to your heart as if he was an beloved friend. It is voice that takes you right into tango - or is it, as Bermeo had said, "Gardel is Tango"?

"It's a dangerous thing. As I dance this, I am glad that I don't understand Spanish and that I am not Argentinian. My ignorance of the language and the culture insulates me from the core of Gardel's music - it is an intense fire that would consume me if I put my heart and soul into the dance. If I understood the lyrics, if I was born in the culture, if I was completely naked and exposed to the full effect of the music, I wouldn't be able to dance to it - any attempt would make me break down into tears."

4. You can get seriously injured dancing to Gardel.

We started watching some old videos of Gardel performing to "Mano and Mano" and "Yira, Yira" on youtube. They featured Gardel playing guitar and singing, flanked by members of his trio.

I'm not a sensitive person - watching Gardel and having an image of him to place with the music does not much effect on me.

However, Man Yung is. Man Yung only got half way through "Yira, Yira" and he didn't want to watch anymore - "Let's dance instead."

We danced for fifteen seconds and Man Yung had to stop. For some reason he just couldn't lead and I just couldn't follow. He had to sit down because he had started getting a headache and a pain in his chest.

Thankfully, it wasn't a heart attack. But the incident illustrates one thing. I have watched a movie at one time in which an artist goes mad. The artist had the ability to appreciate infinite beauty - but not enough talent to capture it. The discrepancy between the inspiration and the ability was too much for his spirit to bear.

We don't know whether it was the melancholy of the music in "Mano a Mano" and "Yira, Yira", or the culmulative effect of being exposed too much Gardel in one evening - but it's a warning.

Gardel is a genius. Gardel is Tango. If you slip while trying to express his music, it would cut your heart and soul into little pieces for sorrow that you have let him down.

I don't think we will be dancing to Gardel again for a while.
Posted by Irene and Man Yung at 11:21 AM

But what about dancing badly to other orchestras? Is it not an insult to Pugliese, D'Arienzo, Di Sarli, Canaro and their host to dance badly to their music?
I think that people don't dance to Gardel just because they are not used to it. If his music makes it difficult to lead and follow and forces one to be finely tuned to the music and the partner, then all the better, no?
As for regular tempos, the best milongas don't have entirely regular tempos, but vary them constantly.

The older Milonguero's told us that they didn't dance to Gardel out of respect,he was so revered. Dancers in England wanted to dance to a track like 'Por Una Cabeza'.

10 years later, I'll say that Gardel sung to be listened, not to please the dancers. The way Fiorentino, Rufino, Famá and Campos sung is drastically different and to a great extent in service of the dancers. My opinion about dancing to Gardel has radically inverted. Thank you for answering my comment :)