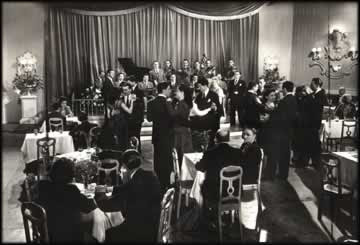 ... asked Man Yung while he was dancing with me at last night's milonga.

I replied, "No, actually, this is a tanda of Pugliese."

Man Yung can't usually tell what orchestra he is dancing to, or what singer is singing. He certainly has no idea about the titles to the songs, what the lyrics say, or whether the particular track is from the 30's, 40's or 50's. Sometimes he even thinks the milonga or vals that is being played is tango.

I on the other hand, can usually play "Name that orchestra" or "Name that singer" pretty darn well (I was extremely deadly at Trivial Pursuit and Jeopardy in my youth). I even know enough Spanish to understand some tango lyrics and impress non-spanish speakers with my translations!

I used to feel it necessary to yell out to Man Yung whenever he would head out onto the dance floor to invite some other lady to dance that it was a "Vals!" or "Milonga!" or "Canyengue!" - because sometimes he would actually dance milonga like a tango or a tango like a milonga etc. - and when he came back to our table he would be quite perplexed if I told him that that he was dancing "wrong" to the music. I thought it was kind of bizarre that he could make these "errors" in recognizing the music, because he is one of the very few people I know who can dance D'Arienzo like it is D'Arienzo, Di Sarli like it is Di Sarli, and vals like a vals and not a "tango but faster". On top of this, we practically lived at the milonga on the weekends hearing the same music week after week. Couldn't he just make an effort to remember?

But then, as Man Yung and I talked about this more, I realized that something else was going on. He would listen to a tango, and without knowing a single word of Spanish, he could tell me quite accurately what the lyrics were saying just by the way the music FELT. I would put two tangos by Carlos Di Sarli with Jorge Duran singing on my playlist together because it seemed to me on cursory listen that they were similar in mood and the feeling they want to convey - and Man Yung would tell me that no, in fact while the first one was about a tragic romance, the second one was just about hard living. And when I checked the lyrics out he would be right.

And there were other things too. That vals that he danced to like it was tango? Well, if I listened to it closely, wasn't Armando Moreno not really swooning and reeling in the compas? How about that milonga? Didn't it sound like Angel Vargas was taking a nice leisurely walk on Corrientes rather than an all-out foot stomping jaunt to the conventillos?

So, Man Yung can recite entire passages from "The Dream of the Red Chamber" and Ming Dynasty lyrical poetry by heart, and remember how to do all of the Okinawa Goju-ryu katas including Suparimpei (I've forgotten all of them already except the first three) although it's been six years since he has stepped foot in a dojo - but why doesn't Man Yung remember the names of the orchestras or which tune is a vals?

He doesn't remember because he simply doesn't care. For him, Tango is completely, utterly wonderful. It isn't important for him to "know" because it isn't necessary for him to make any distinctions - ALL of Tango music is pleasure, and he wants to dance to ALL of it.

Not that I would suggest that people stop learning about the details of the music right now and just do what they feel - because in order to dance tango well, you have to go out there and learn as much as you can about the music. But at a certain point, knowledge can become a liability - when our pleasure in the music becomes contained or "boxed-in" by concerns about what we must do or should do like "Lomuto is danced by only the milonguero-style crowd but not by us tango salon people" or "Pugliese is only danced by wanna-be show dancers and not us milonguero devotees" or "Biagi's music is flat and shallow and people in-the-know will think less of me for dancing it".

How do you choose which tanda to dance to? How much of your dancing is dictated by your prejudices and preconceptions of what you think you should or should not do? Does your extensive tango education interfere with your pleasure and enjoyment in the music? I know it affects me - I've been known to turn my nose up at Fresedo and to sit resolutely through a tanda of De Angelis purely because it was Fresedo and De Angelis. But it shouldn't. I envy Man Yung.

While I was writing this post, I said to Man Yung, "So, your secret is that you allow the music to touch you."

To which he replied, "No. It's my heart that reaches out... to touch the music."
Posted by Irene and Man Yung at 1:29 PM

This is a fascinating post, thank you! I am somewhere in between you two - most of the time I can't identify an orchestra, but I do wish I could. If I sit out a tanda because of the music it has to do with not feeling it and not with who it is ... but I feel like knowing the orchestra and the context in which the song was created would add another dimension to my feelings for it and the way I dance to it. So for now I dance blissfully unaware of the orchestras, but some day I hope to dance blissfully aware of them. :)

Dear Moderntanguera,
Thank you for your comment! I think everything I have experienced in tango drives me mad because it's never one or the other, black or white. You have to know the music, but yet you have to be careful not to let your knowledge restrict you in your enjoyment or interpretation of the music. You have to have good technique, but then you have "forget" about technique in order to put your heart into the lead and the music. The method of learning tango has to be structured in order for people to absorb what they are learning, but yet too much structure with everything broken down into components and dancers will never feel the freedom they should feel when dancing and improvising.
It's part of the fun, and part of the frustration.

Wishing you the maximum bliss no matter which orchestra is playing,
Irene

What an interesting post. It is good to be reminded that everyone hears in different ways, and hears and sees different details in the same things. That is one of the rewards of partner dancing, because our partner can help us perceive dimensions in the music that we were ignoring.

As I read about Man Yung not knowing which orchestra was playing, but being keenly aware of it's emotional content, I remembered a (very excellent) jazz bass player friend who was notorious for not being able to recognize the musicians on a recording (is that Coltrane or Sonny Rollins?, he would say), but he could tell you what key the music was in, and chord harmony of the soloist, at first hearing.