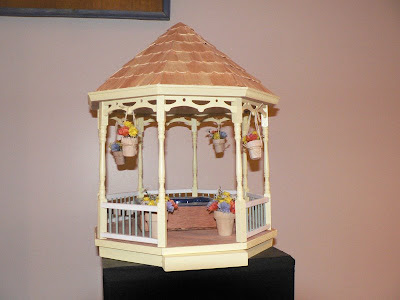 One thing about dancing tango with your significant other - the two of you become your own self-contained entertainment system. Bored at a bus stop? Waiting for a delayed flight at an airport? Walking from the door to your apartment to the elevator? Shopping past midnight at a 24 hour supermarket? All of these situations are golden opportunities for you to break out into a little dance. If you leave out the ganchos and the kicks people might even think you are just walking!

Kidding aside, now that the weather is getting warmer, Man Yung and I like to head out to the various gazebos (Kind of like the one in the photo! Except without the hot tub. And a lot bigger. Because the last time we checked, we are not Legos.) in the parks around town and dance for an hour or so. It's a great way to enjoy the outdoors, and it's romantic (except that Man Yung ends up turning it into tango bootcamp). This is the second year that we have been doing this.

Here's a tip: For all those "top tango dancers" in the city who think that they are so hot and enjoy putting on unsolicited impromptu "shows" in the middle of the milonga - try dancing for an hour in a gazebo in front of an unsuspecting public who has absolutely no knowledge of tango and who have not come to the park to be entertained by you. You will find that you are not really a tango god/tango goddess, but actually............. kind of boring. Sometimes we dance at a gazebo that is right on the corner of a busy intersection, visible to all the people getting off the bus, going to the No Frills across the street, driving by, walking in the park with their kids, etc. etc. You know what? NO ONE CARES, and even if people are curious for two seconds, unless you are really really exciting (And I mean the "Roxana and Fabian" kind of excitement), your tango will more likely elicit yawns than applause.

Well then, thank the gods that, unlike some other people we have the misfortune to know, we don't need tango to prove that we exist. All we need is Man Yung and me, a boombox, a folding chair, a wooden floor that may be a bit sticky but still better than carpet or concrete, a nice breeze with swallows flitting about everywhere, and some tandas of the best tango music we can possibly compile to generate more fun than a barrel full of monkeys!

We can even get lazy and play music we compiled back on September 21, 2007. We played the last CD representing the last hour in a playlist of three hours:

These are the classic tracks from Carlos Di Sarli with Jorge Duran singing - I can't think of any Duran/Di Sarli tango tracks more "classic", except "Vieja Luna" perhaps. People will leap onto the dance floor with their favourite partners for this tanda.

I like to stick with one singer whenever I make a Di Sarli and vocalist tanda. There is such a wealth of music out there by his principal singers - Jorge Duran, Alberto Podesta, Roberto Rufino, Roberto Florio - you can make a whole tanda with just one singer and without any instrumentals. It's important not to mix it up. A singer's voice is a unique instrument, with its own personality and passions, and the singer deserves to be showcased for the entire tanda. This is the way you get to know the singer, to understand his (not her - unfortunately tango music with women singing is not great for dancing - I don't know why but I will explore this later) motivations and emotions, and most importantly, to learn how to dance to his voice.

Once again, I didn't want to break out the big popular Pugliese tracks, so I ended up with this perfectly danceable (and not at all "Forever Tango"! Well, except for "Patetico", which is a signature track for Juan Carlos Copes and Maria Nieves) selection.

I didn't like "El Rodeo" the first time I heard it (I had only been dancing tango for a year. My idea of authentic tango was "Tango" by Carlos Saura. Sorry). It sounded funny, almost kind of jokey. Where's the tormented passion, fedoras and fishnet stockings and the red rose gripped firmly between the teeth? And who would name a tango after a Rodeo?

Pocho is always hanging out at El Beso, seated next to Tete next to the bar with a sour and disapproving expression on his face. Must be all the crazy gringos colliding on the dance floor that troubles him. But anyway, I saw Pocho and Nelly dance to "El Rodeo" on YouTube with nary a fedora, fishnet or rose in sight - and now I like it just fine.

Man Yung's reaction to "La Mulateada" - "That's really hard milonga to dance to!" I'm not a music expert, but I agree with Man Yung, there's something about the rhythm of "La Mulateada" that's different from most other milongas. But that doesn't mean that this tanda isn't loud and fun and Roberto Rufino singing is always a bonus.

Yep, I mixed up the orchestras. If I was a good girl and a real DJ and focused more on the music and dance of Canyengue in my tango life, I might be as sensitive to Canyengue music as I am with Di Sarli and his vocalists.

But I'm bad girl, and not a real DJ, and I haven't evolved to the stage in which mixed up Canyengue tracks with different orchestras would really annoy me. So here they are, and they all sound pretty great together to me.

Introducing a Canyengue tanda right after intense Pugliese and Di Sarli tandas can sometimes be a welcome relief from the intensity, especially when played after a tanda of vals or milonga (which also gives people a chance to have a break). Since most milonga patrons have not partaken in either any Durian or Chinese Herbal soup, sometimes it's good to turn it down a notch late late in the evening so that people have a chance to wind down. The Canyengues still have to be lovely though - a DJ should never ever play something undanceable or awful just to clear the floor and get everyone out!*

Did I put "Cachirulo" in there? Another no-no! Instrumentals mixed with vocals - what a disaster. All I can say is that they are from the same era of Troilo, so they all have the same peppiness. And I have been lucky enough to see the cast of Milonguisimo performing to "Cachirulo" and "Tinta Roja"- visions of some of the best tango dancers in the world dancing to these tracks in my head makes the music so much more delightful. I hope you can all have a chance to watch Milonguisimo (and soon!) so you will be able to know what I'm talking about.

Some of the best, most romantic, most melodic Troilo valses on the planet, what can I say?

Except that the sticky floor of the gazebo was killing my feet, so we never got to dance to this tanda. Instead it was home, lamb chops, Euro Cup 2008 and two fresh batches of blackberry and mango sorbet from the Cuisinart Ice-30BCC. A perfect end to a busy Saturday. 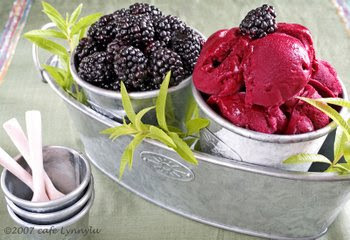 * Whoops! Did I mention Fabio again? I should really stop referring to Fabio all the time - people would think that we were in love.
Posted by Irene and Man Yung at 8:38 AM

There is nothing wrong with a tanda of two instrumentals and two vocals of the same orchestra from the same period. This is the way it was in the 1950s in downtown Buenos Aires according to milonguero Miguel Angel "Pepino" Balbi, singer with Milonguisimo. He also told me that the man in charge of changing the 78rpm records would announce before each tanda: Vamos a bailar a Troilo con Fiorentino and then name the titles. That's how everyone learned what music they were dancing to if they didn't know it already listening to the radio.

Thanks for your advice! I stand corrected. I'm not a real DJ - and there's a lot of stuff that I am writing that is from instinct and from listening to DJ's here in Toronto. So any comment from someone who knows the Buenos Aires milongas well is greatly appreciated!