Our vet told us that Mr. B has incurable cancer.  He has been very sick for a while now, and he doesn't have much time left.

It was love at first sight, when Mr. B and I met.  Compared to his beautiful, sleek, silver tabby brothers, he was just a plain brown tabby with broken rings and scruffy fur.  All the other kittens edged away when I reached down into cage,  but Mr. B locked eyes with me and let out the largest purr.

Mr. B was, and will always be my kitty, my prince, my baby.

We adopted Mr. B to be companion to our other kitty, Mrs. X.  What a bad idea.  They hated each other on sight, and remain bitter enemies to this day.  Every week either one or the other would sport livid red scratches from their unfortunate interactions.  Mrs. X became so indignant about us introducing this vile stranger into her happy home she threw up her food at every opportunity and refused to use her litter box.  We had to give her one of our bathrooms (whenever she wanted to go, she would yowl and we would open the door for her - and close the door behind her so that Mr. B can't go in) before she would revert back to normal.

The truth is - Mr. B was the biggest bully.  Not satisfied with picking on Mrs. X, he would swat and chase the other little cat and pick fights with the ginger cat, who was several pounds heavier and pure muscle without a neck, much like an Ultimate Fighting champion.  Mr. B didn't always win but this never stopped him from trying again the next day.

Was it determination or stupidity?  Mr. B is not the brightest on the block.  He is a meanie but even the little cat can push his head aside and steal food from his bowl with complete impunity.  When the other cats pranked us by pushing all the tupperware from the top of the fridge or opening our kitchen cabinets, invariably it is Mr. B we find at the scene of the crime, munching on the kibble that the other ones spilled.   We could imagine the others giggling as Mr. B got yelled at for something he really didn't do.

Mr. B didn't mix well with the others.  He never groomed them and tolerated only a few minutes of licking from ginger cat when he was in a good mood.  Mr. B, however, thought that I was mamma cat, and often stared at me intently before bowing his forehead towards me hoping for me to wash his face with my tongue.

Man Yung declares that he is very democratic and he loves all our cats equally and I say - nonsense.  Mr. B may be a big, mean, dummy, but he is MY big, mean, dummy. He is the best kitty ever.

Now, Mr. B acts excited at meal times but when we put food in front of him, he can only manage a few bites.  The few mouthfuls he swallows causes him pain, and he runs to hide in the closet because he thinks pain is something he can hide from.  He won't play anymore.  He looks at me and his big green eyes ask me why.

We give him acupressure massage and it helps him to relax, and we believe that it helps with the pain, but every day he gets a little worse. We have to decide when it will end. I tell myself it is ok, he has been loved and pampered and he has had a great life.  Whatever he was put on earth for, he has accomplished.  No time was wasted.  No regrets.

Not many humans can say that of their lives when they are on the final trek towards death.  Things could always have been different.  Did we fritter our time, our money, our lives away needlessly.  Would it have been better if we had done this, done that. Did we choose the wrong path.  What if?

We should be only thinking about Mr. B now, what he would want, what would be best, but I fear that our decision will be mixed with our own self-pity, our guilt, our selfishness.  How frail and foolish and fragile we are!  If only we could live our lives as simply, with as much confidence and conviction as a cat, even a big mean old dummy who didn't like any of the other cats like Mr. B.  Then it would not be as hard.  Then we would know when. 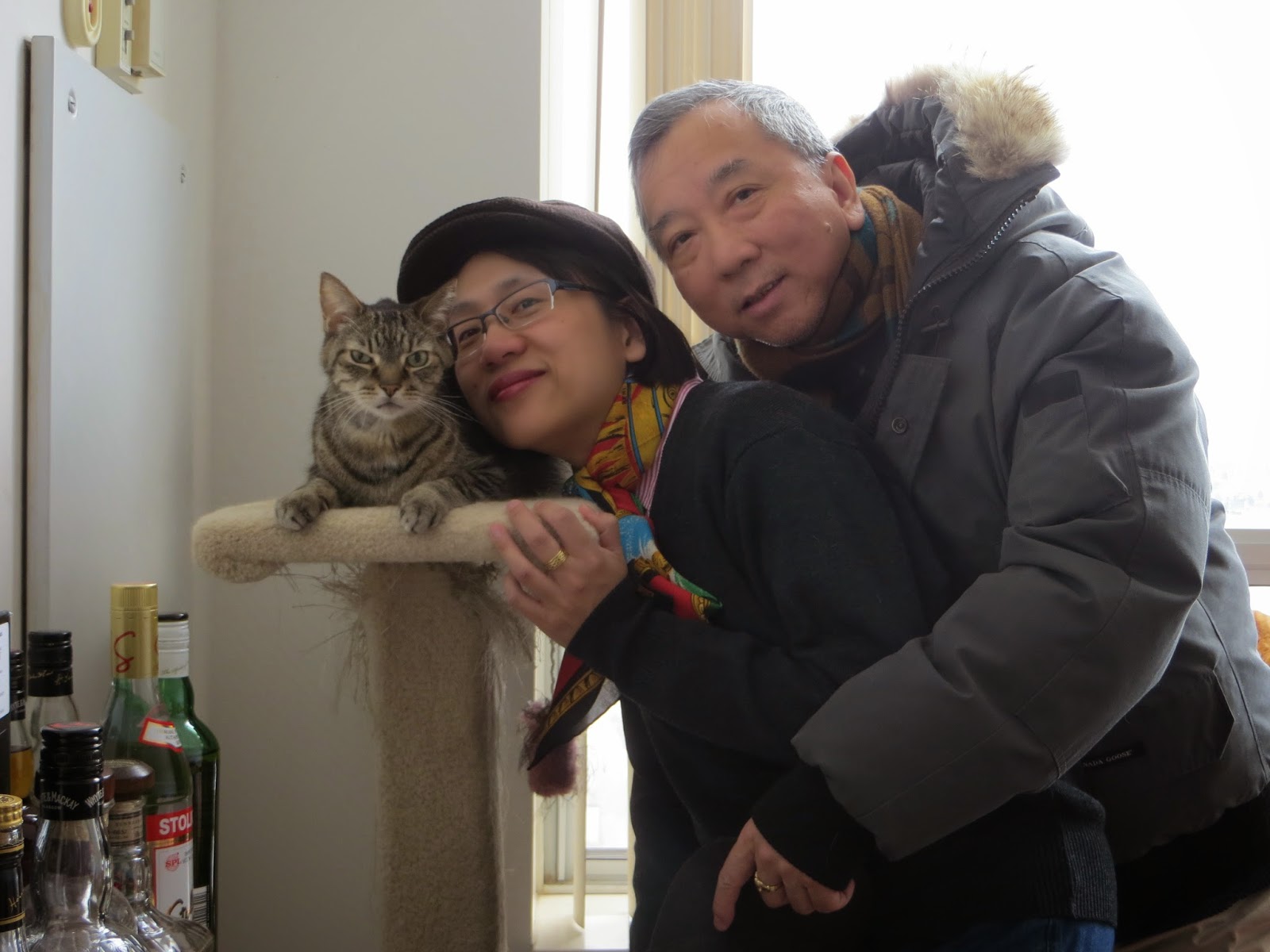 Mr. B passed on peacefully in our arms today, March 24, 2014.  His last hours were spent basking in the sunshine on the window ledge, listening to Irene play piano and surrounded by our love.

Email ThisBlogThis!Share to TwitterShare to FacebookShare to Pinterest
Labels: Cats

Sorry to hear about your loss of Mr. B. We are sure it's like losing an old friend. Every soul is precious.

Thank you for your kind words. This week has been incredibly rough. Tango has helped us with our grief.

Dear Irene and Man Yung - my favourite bloggers.
So very sorry to hear about Mr. B. What a beautiful way to spend one's last hours here on earth. And what a great reflection on life...
Thank you for all you share with everyone.

Thank you very much for enjoying our blog and for your words of comfort. It means a lot to us that you took the time to comment on this post.