Alain Delon and the Mr. Men 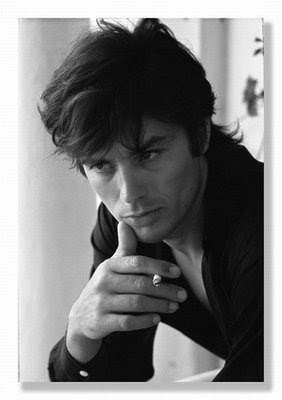 Alain Delon!!!
Man Yung grew up watching Alain Delon's movies whenever they played in Hong Kong back in the 50's, 60's and 70's.

If you think that people were crazy going to watch "Dirty Dancing" four or five times - well, watching every Alain Delon film four or five times in a row was merely normal for Man Yung. "Plein Soleil", "Borsalino", "Le Samourai", "Rocco e i suoi fratelli", "Le Cercle Rouge", "Scorpio" etc. etc. - you name it, Man Yung has not only watched it, he could give me a detailed account of the plot with an accurate description of what Alain Delon was wearing in the movie thirty years after!

Right now, Man Yung has got me hooked on Alain Delon movies too. Great movies, great actor, impeccable style and class, impossibly handsome - who can dispute that Alain Delon is the real deal? If you add the combined ages of Man Yung and myself together, you will get a number that is darn pretty close to 100, but that alone would not stop us from squealing like pre-teenage schoolgirls at a Wham!* concert whenever we think of how dreamy Alain Delon is. 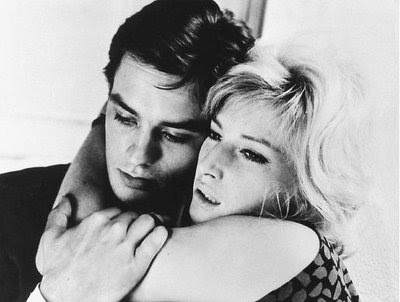 Alain Delon!!! with oh, some clingy woman** (I don't blame her)
in Michelangelo Antonioni's L'Eclisse
While Man Yung's formative years were heavily influenced by Alain Delon, I, on the other hand, grew up with the Mr. Men: 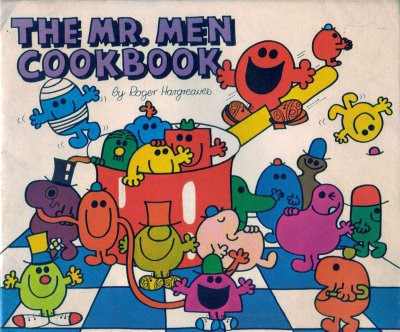 Roger Hargreaves' the Mr. Men
I had the Mr. Men Board Games (Mr. Men Dominoes were the apex of fun - I played these with my grown-up twenty-something uncles on our trip to Scotland until we nearly missed the train) and the Mr. Men Stationery Pack, but I only had two of the Mr. Men books - the stories of Mr. Bump and Mr. Small. I spent the rest of my short English childhood feeling deprived and wishing that by some magic happenstance someone would send me a care package of the complete set of Mr. Men books. Because to a five year old, the Mr. Men were way cute: 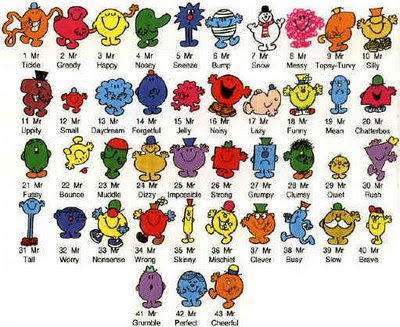 Take your pick....
Well, all good things have to come to an end - the Mr. Men didn't seem so hot anymore when one reaches the ripe old age of six.

The great mystery is this: Why then, do we have grown women in Tango still salivating and fighting tooth-and-nail over the various Mr. Men that they encounter at the milongas?

The last time we checked:

Mr. Bump, despite being a true floor hazard, always has his pick of young chicas to dance with. His best buddies Mr. Rush, Mr. Topsy-Turvy, Mr. Dizzy and Mr. Clumsy have quite a following too.

In a case of the blind leading the blind, Mr. Daydream dances with with his eyes closed, with lovely swooning partners - who also have their eyes closed.

Mr. Uppity, Mr. Mean and Mr. Fussy doesn't dance with just anyone that doesn't belong in the same class (or clique) as them. They are afraid that ordinary tangueras will find them too amazing. Their general sour uppity-ness doesn't stop most tangueras from lusting over their "manly" embraces - indeed, rejection from these Tangueros is a mandatory "rite of passage" for all Tangueras.

Mr. Silly, Mr. Funny, Mr. Nonsense and Mr. Wrong are so hilarious, they should get together and form their own stand-up comedy troupe. But instead they are formulating their graduate thesis on Tango and its relationship with Far-Eastern Philosophies and wowing the chicas on the dance floor with their ingenuity and "deep thoughts". If they take it even further they can be Mr. Clever, who has given up his lucrative high-paying day job to be a Tango teacher and is now putting his M.B.A./J.D./Ph.D. and advanced marketing skills to good use attracting the masses to his pricey, long-winded but utterly useless Tango workshops. Oh, and did I mention that the chicas love to dance with him?

Mr. Messy may look and dress like a temporary Toronto garbage dump - but he is a special favourite with the ladies because he is from Argentina and teaches tango.

Mr. Greedy's big paunch (Or is it Poncho? I can never tell the difference) makes him just as popular as, or even more popular than the average Milonguero when it comes to dancing Tango.

And last but not least, Mr. Tickle's long twisty arms can be found in every corner of every milonga - grabbing all sorts of asses. I don't know how he can find enough spare limb to lead the women he is dancing with with all that grabbing.

Oh, Tango's worthy Mr. Men - you are lucky that Alain Delon doesn't dance Tango. Because if someone with real good looks and real talent and real class like him danced Tango, there won't be a single Tanguera left on the dance floor - they will be all too busy drooling over him.

Meanwhile Man Yung and I will be busy ogling Alain Delon riding a motorcycle here:


Alain Delon!!! and Dalida - "Parole Parole"
* If you know what I'm talking about when I say "Wham!" then you are no spring chicken either.

** I'm just kidding - the lovely lady is Monica Vitti - pretty dreamy in her own right!
Posted by Irene and Man Yung at 8:53 AM