I was going to write a post about dancers in Toronto enjoying their Tango more and more these days.

"Enjoyment?" said Man Yung after he heard about my latest topic.  "For sure - some guys are enjoying it a little too much!"

What he meant by that is not really "too much enjoyment", but rather....inappropriate enjoyment. 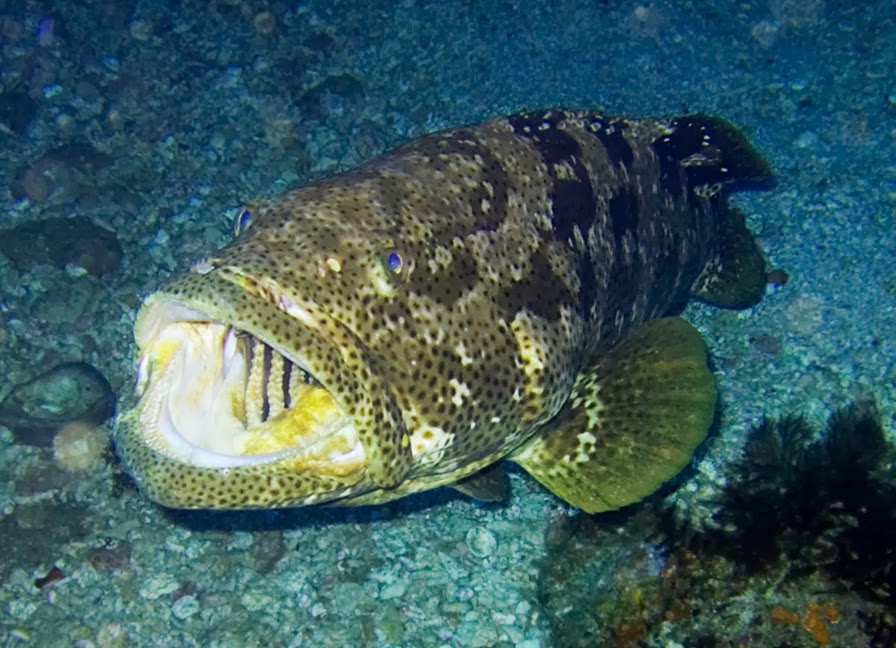 A Groper (whoops, we mean a Grouper)

Not at all hard to spot.  One of our tango friends encountered one early in her Tango journey.

"I accepted an invitation to dance from this guy at the practice - everything seemed ok for the first Tango.  Then, I noticed he was moving his right arm...downward.  For the rest of the tanda, I kept on dragging his arm up, while he kept on pushing his arm down towards my ass!"

She should have stopped dancing then and there - but heck, we were all newbies back then and gropers seem to have a homing device set to locate all the newbies to tango.  The Gropers know that newbies don't quite understand how "Tango" works and what is appropriate  and they are more vulnerable to be taken advantage of this way.

Once when we were in Buenos Aires, we saw a very interesting embrace.  The man had left hand positioned really low, really close, so that it looked very intimate.  So intimate that he was basically rubbing his hand on his partner's breast!

I don't see (or hear about) much about Gropers these days.  It could be that I am too busy playing Tetris on my iPhone when I'm at a milonga.  Or, it could be that you are more likely to find these guys at places where people "don't dance good" and we rarely go to those kinds of places - it's no joke, some guys may be dancing really poorly because they are expending all their energies trying to grab some tanguera's behind instead of improving their dance skills.

Man Yung is flirtatious but he is always a gentleman.  What he really can't stand is the sight of some guys trying take advantage of tangueras in the most sneaky way possible - peeking, accidental contact, etc.

"What these guys are are GAU LO*," said Man Yung. "If you want to ask a girl out, then ask her out!  Don't go around using Tango as a cover for your sneaky thrills!"

* Cantonese expression meaning "Dog Men", which is phonetically similar to the Cantonese for "Penis Man".  This is not supposed to be a flattering moniker.

Once we were at a milonga when some rambunctious dancer knocked into a table and spilled one of the drinks onto the floor.  One of the organizers - gorgeous girl with a great figure  and wearing a low cut dress - rushed to mop up the huge spill before it stained the floorboards.

Quite a few local Tangueros casually sauntered over...but not, ha ha, to help.  They were standing and sitting around nonchalantly as if they didn't know there was something going on.  In fact, they were secretly admiring the view as the organizer bent over!

"What a bunch of assholes!" said Man Yung when he saw what was happening.  He told the organizer to stand up and move aside while he crouched down to mop up the spill himself.  The sneaky bastards sneakily (how else) moved out of the area, because Man Yung's ass and cleavage are not really as titillating.

"Honey, I love watching your ass move in the mirror!"

"Whooo-hooo!  You are doing some crazy sexy moves!"

"I really enjoy the feeling of a pair of nice firm bosoms against my chest!"

"If I had a daughter, she'd be your age!  Come and sit on Daddy's lap after the dance!"

PUKE.  None of these were made up - they are ACTUAL THINGS said to some local Tangueras and even to IRENE at one time or another in the context of Tango.

"I tell you, another bunch of GAU LO," said Man Yung.

Very early on in Tango before I learned the "Power of No", I had to dance with "Super Friendly and Nice to Everyone so no Tanguera can say No to me!" local Tanguero who kept on leading me and other local Tangueras into ganchos.  "GOOOOOOOOOOD GIRL!  That's a GOOD one!" he would say whenever he found any gancho particularly thrilling.

It was even more thrilling for him when the Tanguera wasn't really good at ganchos and executed them in a wishy-washy hesitant manner which led to much inadvertent rubbing of easily thrilled body parts on the said Tanguero.  Nasty.

After taking a class with our teacher Martha Anton (this was in 2006, when Martha and Manolo were in Toronto. Martha was teaching some classes on women's technique) on how to properly execute a gancho, I accepted the Tanguero's invitation to dance the next time he asked me.

When he led the gancho, I kicked him so forcefully and accurately that you could literally see his whole body lift up off the floor about an inch.

"Wow-wee!" he said, visibly breaking into a sweat.  "That's some gancho, girl!"

Needless to say, he didn't ask me to dance again. Yeay!