Does this look familiar to you in your local tango community? Here in Toronto, we unfortunately have a Leader who has been rendered completely, utterly, cuckoo's nest insane by his full-on mid-life crisis. He has been dancing for perhaps over ten years, but he dances worse every year - despite (or because of) all the practicing he does and the classes he's been taking.

His dancing and leading insanity consists of:

1. Bobbing Up and Down;
2. Pulling and Pushing;
3. Dragging and Lifting;
4. Shrugging alternate left and right shoulders, or both shoulders in unison, kind of like the leader's version of this famous women's adornment technique;
5. Wriggling and twisting his torso and tummy like he was Barney spinning an invisible hula hoop;
6. ...And telling the follower that she should be doing this and that* - so as to coordinate with his lack of leading. 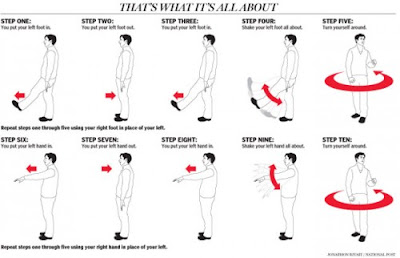 His favourite advice to followers? "Relax."**

** As if anyone could after all that flagrant manhandling.

[Public Service Announcement: Toronto victims tangueras, you've all danced - and collided into other couples - with this guy. He asks everyone and anyone to dance, especially the newbies - so that he can try out all the nuevo tango helicopter, head decapitating moves*** he just learned in class. He also gets a kick out of coaching followers on the dance floor - and you can bet that he unleashes the most inappropriate, ridiculous, self-serving advice possible. Please don't encourage his antics by accepting his invitation. You will become a far better dancer by NOT dancing with (and not listening to) this doofus.]

*** As for the genius Toronto teacher who is teaching these Nuevo Tango helicopter moves - 1) Didn't you warn your idiotic students that this move is totally inappropriate and exceedingly dangerous on the dance floor? Maybe not - because you are doing helicopter spirals on the dance floor yourself! and 2) Didn't you get the news? Nuevo Tango is Dead.

It's a fact of life that a follower in tango will eventually encounter unsolicited (or solicited) nuggets of "following" wisdom from Leaders who really don't have a single clue. Mr. "Hokey-Pokey- Hey, Relax!" is not the only one in this community - he's one extreme on a slippery slopey gradient that ranges from mildly annoying to the totally out of control.

But how can a follower tell?

First rule of thumb: If he's telling you what to do on the dance floor in the middle of a milonga, he doesn't know how to lead it. And you should say "Thank you very much" and run for the hills - IMMEDIATELY.

Second rule of thumb: If he starts taking out the blueprints and flowcharts and hands you a 300 page thesis for your reading at home (quiz next Monday), he isn't getting to the point.

Third rule of thumb: If he reminds you of monkeys or geese or purple dinosaurs when he dances, i.e. dork-like - don't expect him to know what he is doing - especially when it comes to following.

On the flip side of the coin, the best pieces of advice I ever received about following were from Leaders.

Since one of our teachers Alberto Dassieu is coming to Toronto, I'll begin with the advice I received from him.

You may know him as a master dancer and teacher - but do you know that every follower who has taken classes with him after our recommendation have come back from Buenos Aires 100% improved?

Now I won't tell you what the advice was (you'll have to get your own when you take classes with him!) but he only told me THREE things. In class (not on the dance floor). Three, short sentences with no more than five words in each.

Those THREE things took my following to an entirely new level.

Just this past March, Man Yung and I took a private class with Osvaldo and Coca. During the class, Osvaldo focused on Man Yung - but he gave me one little piece of advice about my following.

And once again, everything changed.

What did he say to me?

And that was enough to sum up the whole point of following.

Is it a coincidence that our teachers Alberto, Osvaldo and Manolo are some of the best dancers in the world? And that they learned tango by following as well as leading?

If you followers out there ever get a chance to learn from the old masters, male or female - don't let the opportunity slip by. They really know what they are doing, and they could pinpoint exactly what's wrong. Remember to listen - and to follow that advice, if you are ever lucky enough to receive it.

And that's what it's really all about.
Posted by Irene and Man Yung at 8:00 PM

Are you sure this guy doesn't dance in London as well? Or maybe it is his evil twin brother?

50% of the total production of The Tango Clone Factory in Shenzhen China makes Villa Urquiza/Championship Salon Tango dancers (New and improved! With grins instead of grimaces!). 30% of the the production is devoted to the newest "Hokey Pokey Tango Dancer" model - and I see that some have made their way to London as well!

(I still think they make most of their profit from the mannequins masquerading as Tango dancers though!)

Thanks for your sad observation,