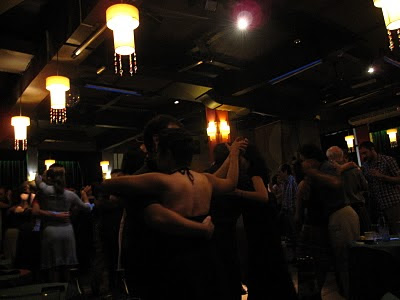 We didn't sleep until at least 5 a.m. on Sunday morning after our adventures at Glorias Argentinas. Accordingly, we slept in on Sunday - but finally dragged ourselves out of bed to buy a birthday gift and birthday card for Osvaldo. We went back to Christian Dior on Callao and got him a light blue polo in medium. We bought two magazines, a Maxim for Osvaldo (and if he was offended by all the semi-nude vixens in that magazine we were going to tell him it was all Manolo's idea! - just kidding, but it would be interesting to see how he'd take the joke) and a Cosmo for Coca.

We had lots of free time so we walked all the way to Feria Recoleta again and then to 2211 Las Heras where Martha and Manolo were going to have classes on Monday, just to see how far it was from the hotel. It's yet another branch of the Escuela de Tango - we decided that we were going to take classes with them to see them one more time. We had originally decided to go see Elina Roldan and Ramiro Gigliotti in their class at Galerias Pacifico (we took their classes a couple of years ago when they came to Toronto), but we would rather see Martha and Manolo once more before we left.

I have to say that La Recoleta has more dog poo than any other area we have been in Bs As. It's because dogs are pets in Recoleta... and everywhere else they are food! (Just kidding! Just a little chinese joke for you)

At 8:30 we went to Alberto´s house for dinner. They made lots of appetizers, like pickled peppers, guacamole, argentine -style marinated olives - Man Yung's favourite ever since he had some at the restaurant that Alberto and Paulina took us to last year. The main course was a fragrant roast pork loin with applesauce. Alberto and Paulina spent a lot of time preparing the dinner! All of it was incredibly delicious - and of course tasted even better with the excellent company and conversation. You would be proud of me, we had a very long conversation over dinner and all in spanish! Definitely a great improvement over last year, when I was stumbling over all my words and succumbing to huge awkward, non-tango pauses... trying to find words to express myself.

Alberto asked us how it was at Glorias Argentinas the night before - and we amused him with the story of the milonguera who kept on asking Man Yung to dance. Alberto thought it was very funny how popular Man Yung was - but he too agreed that it was not necessary to accede to her requests for every tanda. On a serious note, Alberto wants us to enjoy a day in the country with him and Paulina the next time we come, with fishing and asado. To see and experience a little bit of Argentina that we won't necessarily experience going to classes and milongas all the time. Without tango? How can it be possible for Man Yung? ;)

After dinner we went together to El Beso, only a few minutes away by Alberto's car. Sunday nights at El Beso is crowded - hard to navigate the floor, especially with some crazy people bumping around.

The big name milongueros love El Beso - Tete, Pocho, Abel and probably quite a few we didn't know or recognize - were all there. Abel came over to say a few words to Alberto and we were introduced to him. Abel was cool and distant but since Alberto introduced us to him, he sat next to us as a courtesy and gave a placid monologue for a whole tanda about how he loves Maipu 444 on Saturdays and how the young flaquita Korean girl danced really well. You know, the Korean girl whom we've seen at several different venues who puts more passion into her "face dancing" than into her actual dancing. I think it works in impressing the men, you should try it! :-P

As the night progressed, Ricardo Viqueira, Cacho Dante, and I think Alito also appeared. We got to fulfill our promise of buying Tete a drink, and he ordered a scotch which we made into a double - and he drank it really fast without passing out, and still whirled around in a dancing frenzy all night. He has the best endurance for dancing you know.

By the way, I saw Tete dance with the Korean girl, she is not so hot despite all the faces she makes when she dances, because she obviously can't follow Tete. It was weird watching her keep her eyes squeezed shut and try to retain the same transcendent expression after being jarred abruptly awake every two seconds by trips and bumps and other mishaps on the Tete rollercoaster. There was also a girl wearing yellow daisy duke shorts so thin that nothing is left to the imagination - I think I saw her last year as well - she's a stunner [and now she is the new partner of a former Mundial champion! Hooray for translucent daisy dukes!]. She can't follow Tete either. As for me, alas, I didn't get another opportunity to dance with Tete - perhaps it was all for the best. The air conditioning in El Beso was antartic cold, and Tete sneezed explosively no less than three times! Man Yung looked aghast at all the visible spray in the overhead lighting. No, seriously, I didn't want to carry his germs to Osvaldo on Monday.

I danced a lot with Man Yung, especially milonga, and we had a good time dancing with each other (especially after Alberto and Paulina left at 1 a.m. - yes, it is stressful to have your teachers looking at you all the time, no matter whether it's Martha and Manolo or Alberto and Paulina). I said to Man Yung that at the end of the evening, I was dancing with a milonguero - that is, I was dancing with Man Yung! ;-) He is getting really really good, and it is really good practice dancing in such a crowd of people.

OK, don´t get buried by the snow, hope you can find your shoes, but it doesn´t matter, because you dance like a milonguera no matter what shoes you wear!

Irene
Posted by Irene and Man Yung at 7:20 PM