The beautiful and talented milonguera Adela Galeazzi has been teaching classes at Salon Canning with Rino Biondi on Saturday afternoons lately - and after class one day, one of Adela's favourite dance partners, milonguero Roberto Fortunato, came to visit.

Adela's awesome technique reminds us of the way cats move - with softness, precision, speed, and underneath it all, surprising power. 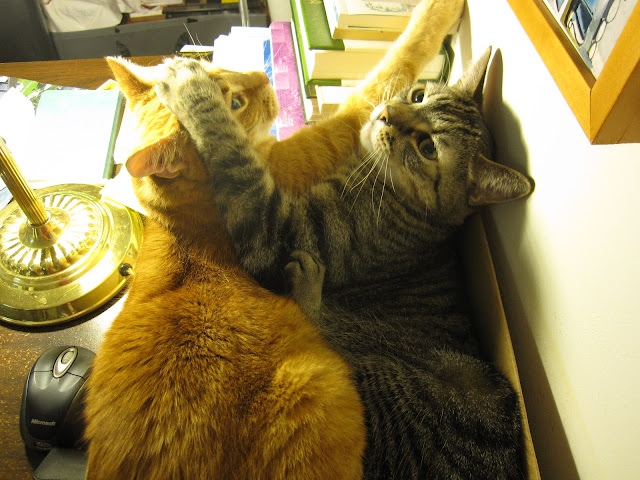 "Squishy?  Not even - we're perfectly comfortable!"

We thought our cats would be interested in learning how to tango since they are naturally athletic and musical creatures (they have their own kind of cat opera called "caterwauling" - we hear it every morning if we are even five minutes late in making their breakfast) - but they were too busy trying to fit more than one cat in a half-cat sized cardboard box to answer us.

In fact, our cats keep on surprising us.  We thought that cats would go "meow meow" but we were mistaken - they don't understand "meow meow" language, let along speak it.  We can go "meow meow" at them all day and they would look at us like we were completely bonkers.

"No, the proper way to speak to "cat" is to go 'Aurrrrrrwow!  Aurrrrwow!'" said one cat.

"Don't be silly with those noises," said yet another.  "I understand Cantonese perfectly well."

We were also mistaken about what cats like to eat.  Man Yung had been brought up to understand that cats ate fish. In fact, 75% of our cats turn up their noses when presented fish.  The other 25% would eat fish, but only in the form of salmon sashimi - but she also demands to have bits of cooked lobster, shrimp and crab whenever we have it for dinner.   As for the non-fish-eating 75%: one likes yogurt and cheese (and beef tartare!  You can't slice any beef at home without him 'caterwauling' for some), another likes french fries, KFC and crispy b.b.q. roast pork skin, and the little one goes nuts for BREAD.  Man Yung and I have to hide in the bathroom if we want to eat a sandwich in our house - but even with the bathroom door closed we are in mortal danger because we have a ferocious, bread-eating cat on the other side of the door, swearing loudly in Cantonese and trying to claw his way through the wood.*

* Joking aside - we let our cats have a little "human food" only as an occasional treat - the rest of the time they have to eat their nutrition-optimized cat food!

We love our kitties - even if they are trying to steal our sandwiches! 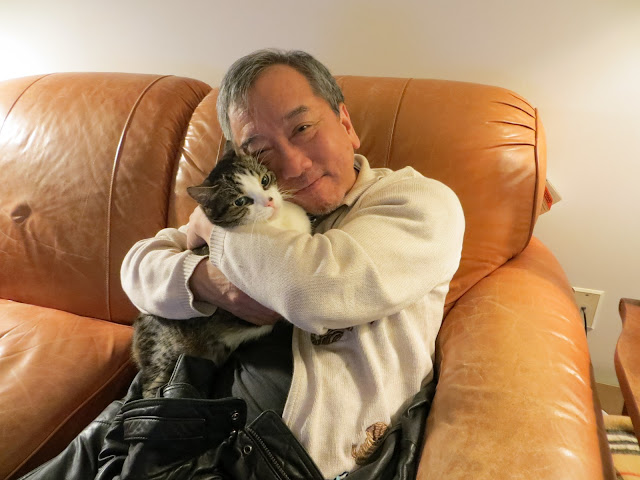 Man Yung risking life and limb in hugging our most savage, bread-guzzling kitty.  Kitty was not amused by this display of gratuitous human affection.


Thanks Adela for sharing your video with us!