The Karate school I went to had Jiu-Jitsu classes offered by a guest instructor every Wednesday.  They had an independent grading system, so no matter what your rank was in Karate, you had to earn your belt separately for Jiu-Jitsu.  Nevertheless, skills in self-defense were seen as desirable for advancement in Karate, so my Karate friend and I decided to try the class out.

The class was notorious for being tough - they really beat themselves up in there.  Luckily, although we were both newbies (yellow belts!) we were not wimps.  We could take a couple of bumps and knocks and over-zealous joint locks.  In fact, we were proud to be able to endure some pretty rough treatment - a badge of honour, if you will.

After a few weeks of this class, we noticed something strange.  All of the Jiu-Jitsu sensei's most dedicated students would have red duct tape stuck all over their uniforms.  We asked a senpai why.

"That tape is to show where you have been injured.  Your practice opponent will know to take it easy on your shoulder, for example, if you have taped yourself there."

Hmmmmm....something's not quite right here. 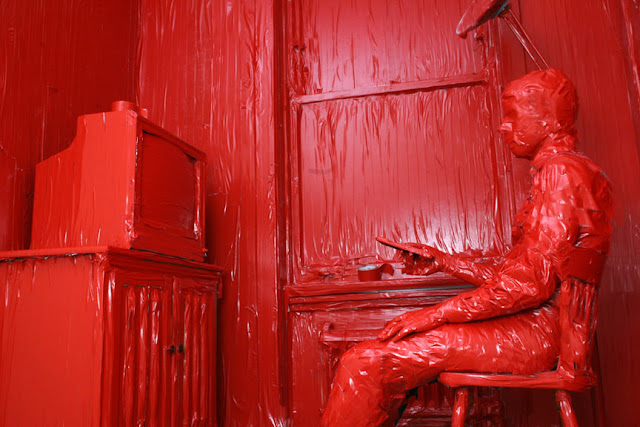 In Jiu-Jitsu class this means: Really, Really injured
Alarm bells should have gone off but we were young and stupid.  It didn't take long before I was put out of commission - a badly twisted elbow from a careless and violent takedown.  My friend, being quite stubborn, lasted a few months more - but she too, ended up with a nasty injury.  Better stick to Karate, we both concluded.*

* Not that Karate is necessarily better - in martial arts, it all depends on whether the Sensei does his or her utmost in ensuring that safety of the student is prioritized over the desire to be or look "tough".

Looking back to that time in my life twenty years ago, there were some pretty dumb things we did for the sake of being "good" in the martial arts.  My friends and I were not training to be bouncers or prize-fighters, we were studying in our real lives to be teachers or doctors or lawyers or engineers - why should we subject ourselves to that kind of treatment that could give us permanent injury?  One black belt was a real firecracker at the age of 20 in the Philippines - but by 50, he could hardly walk and needed extensive surgery on both knees.  Another venerable old black belt moved so slowly they nicknamed him "The Mountain" - you'd think it was because he was calm and all, but in fact, he was just hurting all over.

Luckily we had good Sensei who knew that some of the macho, "I am man enough to take it" stuff out there in the martial arts world was bullshit.  He always told us this: "No matter what your interests are, or what you want to learn, make sure you don't injure yourself while doing it!"

So why are we hurting ourselves dancing Tango?

When we first started Tango, one of my first questions to my potential "Tango Sensei" on the phone was - what kind of shoes should I wear?

Even I knew then that the answer should not be "Whatever" - it should be "Shoes that have smooth soles, to ensure there is no traction when you pivot."  However, that "Whatever" was much in vogue in Toronto at that time - thus quite a number of trendy-uns wearing running shoes to dance.  Luckily, it's not that common anymore.

Alas, Man Yung didn't catch on too quickly - he wore loafers which had horizontal grids running across the bottom for the first eight months.  "Wow, my knees are sore!" he'd say after every class.  He thought it was because of the exertion.  In fact, it was the damn shoes.

He finally bought real, Buenos Aires, custom-fit Tango shoes from our Tango Sensei.  They arrived...way too tight.  Should they be this uncomfortable? we asked our Tango Guru.  "You want them to be tight - they'll stretch out," was the response.

One night after the milonga (and crazy non-stop dancing by Man Yung), we arrived home tired but happy.  Man Yung took off his shoes and walked across the carpet.  I casually looked over his direction - and saw ominous red stains following in his direction.

"What's that?  Hey, Man Yung, wait a minute...it's BLOOD!  Stop moving!  You are ruining the carpet!"  I attacked the stains frantically with a wet paper towel - thank God for Stainguard.

It was the chafing from the too-tight shoes.

"Ha ha!  That's just ridiculous!" you say - but self-abuse in the name of Tango could happen to you too.

One lovely Toronto Tanguera we know used to take classes with a toppity-top traveling Tango Professional some decades ago.  He was REALLY STRONG and his trademark was making his partner do REALLY FAST OCHOS.  "Faster!  Faster!" he would urge.  The poor Toronto Tanguera cracked a bone in her wrist from being "led" (shoved? hurtled?) by this genius.  Yet another ancient Toronto Tanguera was just too nice, she didn't say no to the nascent "Nuevo" instructor when he asked her to dance. We all jumped in our skins when we heard the loud "thud" - he really defied death when she didn't break her neck from being tripped and dropped.  And last but not least, one Toronto Instructor plotted his triumphant return to Tango for months - but when he appeared at his first milonga in many moons, his over-enthusiastic back sacadas*  landed another unsuspecting Toronto Tanguera flat on her back on the floor.

* Funny how many professionals think that big, dangerous movements in a crowded spaces means - "I'm a really great dancer! Look at me!  Look at me!"

We've mentioned some of the wild Tangueros and their hapless Tanguera victims - however, the Tangueras sometimes have to share in the responsibility too.  Some are taught to dance "heavy" (which is not a synonym for "grounded", despite what most think) so their partners can really notice that they exist (and also so they could "slow the man down", if necessary).  Watch out for dislocated necks and shoulders wherever they go.  Others have decided to embrace the "frantic embellishment" movement - slashing their glittering stiletto heels rapidly to-and-fro in the Tango version of the Knife Game.  It's one problem when they gore the people around them, and another problem... when they stab themselves in the toes.**  Good luck to the poor gentlemen risking injury for a dance with these talented Tangueras.


** I, too, was a rabid adornista: "Been there, done that," said Irene.
And heck, just ask your local Tango Professional.  How many of them have injured themselves jumping, lifting and spinning, or dancing with heavy ladies and crazed gentleman?  Is it eight out of ten, or ten out of ten?  Ouch, ouch, ouch!

"I had no idea that Tango could be so dangerous!" said Man Yung.  "In Buenos Aires you can see all manner of old folk dancing Tango and they all look intact!"

It should be common sense - don't injure yourself dancing the Tango!  I don't think that "No Pain, No Gain" should be the rule here.  But still many subject themselves to injury - and for what?  OK, so you really dying to go pro - but how about the rest of us who consider Tango just a pastime? Don't tell me that people are sacrificing life and limb for a shot of Tango Glory!*** At this rate and in this fashion, looks like lots of us will be dancing Tango in our old age with red duct tape all over our bodies....hmmmm, I guess it's a more, ahem, interesting fashion statement than fringes, sequins and fishnet stockings.

*** What Glory is that, exactly?  Tango Championship?  Worldwide Tango Fame and Fortune?  Better stick to your day job!
Posted by Irene and Man Yung at 3:48 PM