You'd think that we had enough excitement with Osvaldo and Coca at La Baldosa on Friday - enough to fill our "tango excitement" quota for the whole year.... but no.  We had to head over to Glorias Argentinas the very next day - with our tango parents, Martha and Manolo!*

* They are our tango parents, because we love them very much - and because without them, our life in tango would not be possible.

At Glorias, we met for the first time the world famous tango bloggers from Wales, Bob and Viv.   We're sure Bob and Viv would agree it was a cataclysmic, ground-breaking event - the first ever Congress of the Chinese-Canadian/Welsh Tango Bloggers, so to speak.  Too bad that Jantango did not capture the entire event on video - the introductions, the mutual pleasantries, the invitations to dance, the threats to start a blog war, etc. etc.  Moving on....

What we did manage to film was Martha and Manolo dancing socially at Glorias.  Many of you may be familiar with the videos on the internet of their Canyengue, Milonga and Tango Salon performances in the milongas of Buenos Aires and from their frequent teaching tours around the world.  It was a treat to see them in a relaxed atmosphere, in a milonga close to their home, dancing swing and milonga!

Our "Tango Parents" Martha Anton and El Gallego Manolo dancing Milonga at Glorias Argentinas, October 16, 2010
As you can see by the videos, Martha is a beautiful, glamorous star of the tango universe (all the girls of the milonga watched Martha's feet and how she walked to learn from her - she is a Legend) and Manolo is impeccably dressed, a gentleman always. Their dancing is calm, joyful, playful. We visited their home on this trip and Manolo showed us his wall-to-wall wardrobe filled with matching clothing and tailor-made suits - he has been a fixture at the milongas of Buenos Aires for decades and decades and he knows how a gentleman should look for tango.

Man Yung is always nervous when we go out with Manolo to events - that's because Man Yung is such a dork, his jacket pockets are always flipped up or something's wonky or not buttoned.  "Yikes, Man Yung, that's gross!  What's wrong with you?" Manolo says sternly (but with good humour).  At the milonga, you have to respect yourself, respect the venue, dress and look like a gentleman.  Gentlemanly behavior (and dress code) comes first.  The dancer comes after.

Something that happened during the milonga that unfortunately didn't get filmed.  Sometime after midnight, a tanda of Canyengue played.  A few couples ventured out onto the dance floor - and so did we, because Martha and Manolo want to see us dance Canyengue whenever possible. Now, we were totally rusty, and our technique (as usual) is off - but after a few seconds, the people who got up to dance sat down, leaving just us on the dance floor!  We had no choice but to stick it out, dance the whole song - and put out hearts into it.  The people from the table stared at us, and we had to keep on going, thinking in turns, "did we miss some announcement?" and "was our dancing so horrible that they are completely mesmerized, like onlookers transfixed on a train wreck?"

When it ended, everyone applauded, like we had just done an exhibition!  We quickly ran off the dance floor, completely embarrassed at all our unintentional attention-grabbing. We asked Martha and Manolo what had just happened, since they had observed it all. It wasn't that mysterious. "I think the people just wanted to see you dance," Martha said.

While I was still trying to understand what had transpired, Man Yung cabeceo'd Haydee Esther Malagrino, one of the principal Milongueras of Milonguisimo [and here's another video of her dancing on stage with the cast of Milonguisimo], sitting all the way at the front of the hall.  We have admired her dancing since even before we met her through clips of Milonguisimo on Youtube.   She has the entrega and exquisite footwork to match the fast feet of her Milonguisimo partner, Jorge Uzunian.  She is another of the goddesses of tango - lucky Man Yung!:

Man Yung dancing with the incomparable Haydee Esther Malagrino of Milonguisimo,
October 16, 2010
As you can see, we had so stunned the people at Glorias with our Cantonese-style Canyengue (sorry you don't get to see it - maybe it's for the best!) that most were still sitting down when Man Yung started to dance with the lovely Haydee.

Haydee came over a little later and arranged for me to dance a tanda of tango with a milonguero from her table.  And later, yet another milonguero whom she had been dancing with - and it's none other than Hector "Coco" Guaraldi, the brother of our friend Chiche who always sits at Carlos Anzuate's table!  Here we are dancing Coco's unique style of milonga traspie:

Dancing Milonga Traspie with Hector "Coco" Guaraldi at Glorias Argentinas, October 16, 2010
And last but not least - towards the end of the evening, Oscar Hector appeared at our table.  Yes, the Oscar Hector - organizer of milongas at Glorias Argentinas and the gigantic Salon Sur, impresario and principal dancer of "Milonguisimo" [we have posted clips of his brilliant performances before on our blog here, here, and here, and here], producer of radio shows, tango personality extraordinaire - if you have not been hiding under a rock and have actually seen historic footage on youtube, he is the one making the announcements at events in homage of such tango luminaries such as Carmencita Calderon, Lampazo, Los Dinzel....When I mentioned him to Osvaldo and Coca, Coca told me he is "Milonguero Milonguero".... And if you ever get a chance to visit Salon Canning, Oscar Hector's photo is the one that is the first one that you see at the entrance. 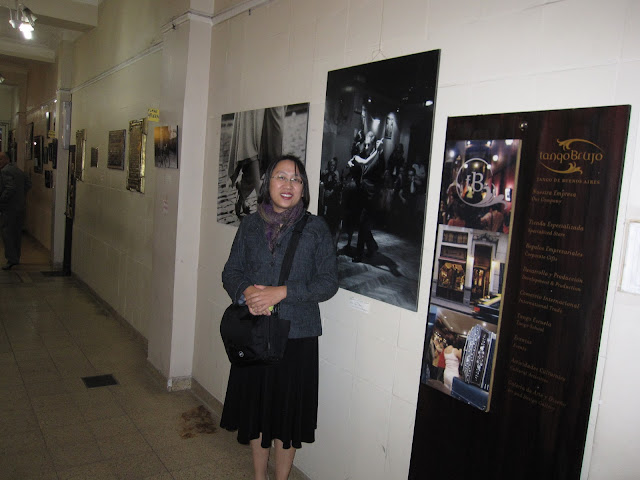 Photo of Oscar Hector with Teresita Brandon at the entrance of Salon Canning
So what was Oscar Hector doing standing there at our table, waving and signaling at the DJ in the DJ's booth?  He wants the DJ to play something lovely for a lovely dancer he wants to dance with.

Me! Me! Me! Yippee! I have always wanted to dance with Oscar Hector, from even before we met we have admired his dancing in videoclips of Milonguisimo on Youtube.  He was the first person of the Buenos Aires milongas I've ever talked to - I called Glorias Argentinas on the first day we were ever in Buenos Aires and it was Oscar Hector on the other line, patiently giving me directions to his milonga.  He has never asked me to dance before, this was the first time he ever asked....

So there we were, Man Yung and I, jumping up and down in glee in the most uncool way possible. "Can we film it!  Can we film it!" we asked.  Oscar Hector looked at us with one eyebrow raised. "So you can make DVDs and make a ton of money selling them to the Japanese?" (he was kidding).  Oh, we don't care, we just want to film it so we can have a souvenir and remember this dance forever!  As I said, we are such dorks.

Here's the video of my first ever dance with Oscar Hector - and yes, he selected the most lovely music, a tanda of Di Sarli instrumentals from the 40's. It was a "Dreams come True" moment - I think you could see by the blissful expression on my face:

Dancing to Di Sarli with Oscar Hector at Glorias Argentinas, October 16, 2010.
I look like I have just been transported to Tango Heaven

That's the end of the videos from our night at Glorias Argentinas - but that was not all.  Jorge Garcia and Susana arrived really late, past 2:00 a.m. - they had promised to met us so we could give them the photo we took of them at La Baldosa the night before.  After greeting us and other friends warmly, they lost no time, and started dancing right away - but I suspect they had already been dancing for a few hours at another milonga. Susana was tired, and when they passed by our table, Susana said she needed a break - and told Jorge to dance with me!
We've admired Jorge Garcia's dancing since we first saw him at Elba Biscay's birthday party, but I've never had the chance to dance with him.  It was a milonga - and dancing with him was so smooth, it was like gliding.  Jorge has great control, great navigation, and a great sense of fun - for about ten seconds we danced right around the centre pillar at Glorias Argentinas, right flush again it - just because there was a phrase in the music that called for exactly that.
What was Man Yung doing?  He should have been taking notes, or at least filming.  Well, he was too busy dancing!
More videos to follow.....
Posted by Irene and Man Yung at 9:59 PM

yeah--you look like you're in heaven!! so cool! I really enjoy watching these clips.

Congratulations Irene, the milonga with Hector is full of energy, and it looks like you guys had a lot of fun!

It was a real treat to dance with the dancers of Glorias Argentinas - and as you can see, everybody has their own distinctive style of dancing and it's still tango (or milonga, or vals).

These recent posts can be seen as a continuation of our "Distinctive Styles" series that we posted back in April, you can see some of the distinctive dancers we encountered here:

Thanks for enjoying the videos, we enjoyed making them too!

You are right, there were more countries represented than at first glance. We are often mistaken by the Argentinians as Korean/Japanese/Taiwanese but we are actually from Hong Kong. I'm a citizen of the United Kingdom which makes me British (says so on one of my passports) and a long time ago someone asked me if I was Irish (they were delusional, but oh well). In addition, whenever we say that we are dancing "Chinese Style Tango", Alberto Dassieu protests and says who are we kidding - and that we are, in fact, Argentinian. Therefore our post should be corrected to read:

The first ever Congress of the Chinese-Canadian/Welsh/English/British/Irish/Korean/Japanese/Taiwanese/Hong Kong/Argentinian and American Tango Bloggers.

If everyone in the world danced tango, will there be a war between tango nuevo, show tango, tango salon and milonguero tango? Would people try to gancho or embrace each other to death? Humans!