We must be old fashioned. If a stranger grabs our beer right from our table and takes a big chug out of it, or pinches our cellphone and starts dialing a merry chatline - well, short of these actions being the result of an urgent, life-threatening, world-imploding emergency, we would consider the said unauthorized appropriation rude.

Has someone just expanded the etiquette rules with respect to tissue boxes?

Just last weekend we were enjoying ourselves at one of the local milongas. We have year-round allergies - so Mr. Tissues was out on the table. Normally, when someone wants to use a tissue from our box, they'd ask. Politely. And we'd say ok. The last thing we would want is for Man Yung or any other person we know to sneeze and drip all over their unsuspecting partner in the middle of Di Sarli.

The tanda had just ended, and Man Yung was returning to our table when - out of the blue, the little tanguero* passed by our table. Without saying hello, looking at us or even ASKING, he snatched a tissue out of our box and started swiping at his snotty, sweaty nose.

* Little, as in - dead ringer for Napoleon. And I mean the Man, not the Symphony. Without the heels. And not on a horse.

Little Snot Guy looked up from his sweat and booger swabbing revelry... and sneered. "I'll pay you," he said.

Notice that the statement "I'll pay you" was not followed in any way by an "apology", or a "valid explanation for rude behavior plus an apology", or even a "lame self-deprecating joke about the mistake and an apology".

We continued to glare at this stunning example of rudeness. Little Snot Guy shifted off...

...And returned five minutes later with two crumpled (perhaps only slightly used?) tissues that he had snaffled off someone else. WHICH HE PROCEEDED TO STUFF BACK INTO OUR TISSUE BOX.

That is precisely the existential question we have to ask.

We were scratching our heads still when we took the opportunity to observe Little Snot Guy on the dance floor. What fun he was having. He pushed the ladies in - then out. He dipped and tripped them. He flung them around, helicopter style, into other people. All in all, a one-man hazard.

"Ah!" I said. "I know what the problem is. He's one of those newly evolved types of tango dancers who have lost all sense of personal space. He can't recognize territorial boundaries, whether it is for himself - or for other people!"

Yes, evolution has struck Toronto Tango. We should have known better, because a couple of weeks ago, we faced a group of such beings head on at one of the weekly get-togethers of the "Happy Jolly Tango!! Association". While the rest of Toronto Tango is still sticking to its "quaint" practices of following the line of dance, trying to dance without bumping into other couples, trying not to lead movements that invade into other people's dance spaces, etc. - the beings of "Happy Jolly Tango!! Association" had obviously evolved into a higher level of person to person, ahem, integration.

Human Pachinko was the order of the day as people bounced against each other like it was the most natural thing for people to be concussively knocking into other people. Gleefully grinning couples piled up, several bodies deep, as an aftermath failed leaps and spins. Step on someone? No problem. Elbow someone in the face? Couldn't even feel it. Apologize? What for? It was dizzying watching the seething mass of hot steamy bodies kick and gouge and squirm and shove in a no-holds barred tango orgy. It was worse (for us anyway, with out old-timey, well-defined sense of personal boundary) to wade into the mess and try to dance. 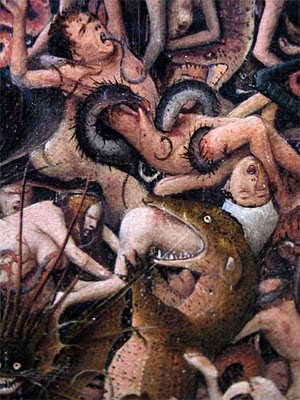 ** Otherwise known as "Tango Hell".
We may be soon on the outs as more and more people in Tango evolve into this higher plane of spatially oblivious tango spaciness. Oh well. Let this post be a time capsule then, of times gone by, when you were still you and me was still me (or something to that effect) - and let us reminisce sadly about all the things that used to be

THE UNEQUIVOCAL INVASION
OF PERSONAL TERRITORY
- Pushing, shoving, and general collision with other couples on the dance floor.

- Dancing in Big, Obnoxious, and Dangerous ways that make people have to detour far, far around you to avoid being gored by stilettos and other flailing appendages

- Rubbing your intimate body parts onto your partner without your partner's consent (or, for the real experts among us, onto surrounding people on the dance floor without their consent)

- Not washing your hands after going to the bathroom, thus invading all the people you touch with your grimy germs

- Not taking care of your personal hygiene, thus invading all the people around you with your skunky stink

*** Believe it or not, we have encountered tissue-stealing before - from a newly minted Toronto Instructor, no less. He snorted cheerfully into the tissue... and then threw it back onto our table! Man Yung took the damn thing, chased down the guy - and stuffed it back into his pocket. Where does it say on our milonga entrada ticket that we are supposed to clean up after someone else's snotty tissues that they pilfered out of our box? Did we not pay to get in too?

Until we, too, step up on the tango evolutionary ladder into the state of "Anything Goes" - considered yourself warned. BACK OFF. Don't make us piss on you to mark our territory!
Posted by Irene and Man Yung at 9:30 AM