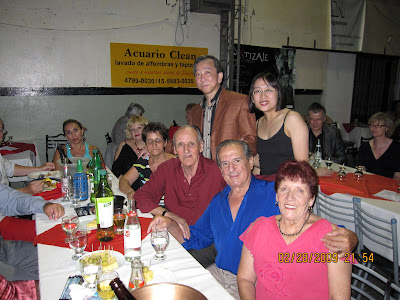 With Martha and Manolo and Osvaldo and Coca at Sunderland, February, 2009
Martha and Manolo are not merely our tango teachers, they are our "Tango Parents". In 2006, we took all the classes that they taught in Toronto - all 52+ hours, equal to a whole year of weekly classes. We had never planned to travel so far from Toronto to Buenos Aires, until Martha and Manolo told us to fly there and visit them at their Camicando festival in 2007. And every year since we have returned to spend time with them. Without their love, guidance and teaching, we would not be where we are today.

The time we spent with Martha and Manolo in Buenos Aires was not all about the Camicando festival, classes and eating out - they would often take us to milongas! We learned a lot about respect and proper behavior in the milonga and in the world of tango just by sitting with Martha and Manolo, talking to them and observing how they interacted with the people of the tango world. There are codes beyond the so-called "codigos" - who would know them better than two of the best and most respected dancers from the older generation? But that's a subject for another post.

Unfortunately this year, we didn't get many opportunities to spend time with Martha and Manolo - their teaching tour to Comodoro Rivadavia in the south of Argentina coincided with most of the dates on our trip, and therefore we were only able to have dinner with them on the day that we arrived, and see them a little during their class at La Salsera on the next day.

We have a sneaking suspicion that Martha and Manolo were probably worried about letting us loose in Buenos Aires without having them around to keep an eye on us! In any case, we have found that on this trip, we spent a lot of time hanging out with Osvaldo and Coca, two of Martha and Manolo's closest friends.

We have been taking classes with Osvaldo and Coca every year since they taught at Camicando 2007. We even spent some time with them at a few milongas last year. But this year, we saw them all the time - even when we didn't make plans to meet! Did Martha and Manolo give Osvaldo and Coca a call before they left to tell them: "Keep an eye on our Tango children! We don't want them to get into any trouble - or to cross over to the dark side and start dancing Tango Nuevo!"

We visited Osvaldo and Coca at their house in Lanus. We visited them there last year too, but this time we were able to actually photograph one of the horse carts that passes their house several times a day: 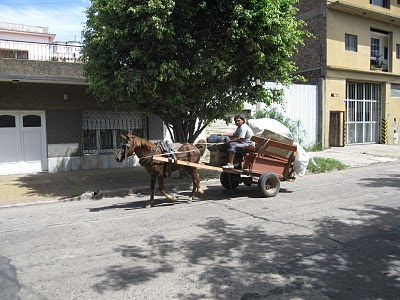 It's not shocking to see this scene at all in Lanus - it is normal.
How else could you transport your stuff from one place to another?
In addition, we took some of Osvaldo and Coca's excellent classes at El Tacuari. It's a lovely little tango school in San Telmo, run by by a very nice couple called Ruth and Andreas: 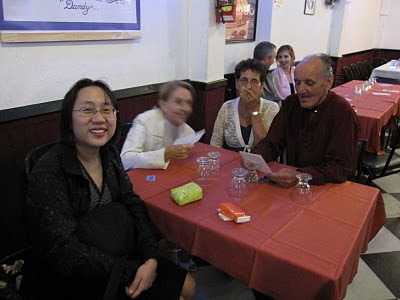 At Sin Rumbo: Did Osvaldo order the Milanesa?
In fact, no - he ordered the Matambre. And we got to eat some too.
Then, by pure coincidence a few nights later, we bumped into Osvaldo and Coca at Caricias in Villa Urquiza - so far from downtown that two blocks over we would be in "la provincia" (as the taxi driver told us).


Osvaldo and Coca dancing at the Tuesday night milonga Caricias
(we were almost the only tourists in the room!)
We tried to film an entire tango, but it was impossible. Osvaldo and Coca knows everybody every place that they go - they always have to interrupt their dancing to say hello!

Osvaldo and Coca really live their tango life to the full. We asked them how often they go to milongas, and the answer was almost every night. Sometimes they would even go to two milongas in one night. Following them around, we went to milongas that we wouldn't normally go to - like Confiteria Ideal and Circulo Apolo. And they would stay sometimes to the end, 3 or 4 a.m. in the morning. Were they staying up so late just for us or was it their habit? We're not really sure, but what an adventure to spend time with them! We have never experienced such an exciting and multi-faceted view of the tango scene before.

Of course, being around Osvaldo and Coca also meant that we got front row seats to some of the most beautiful tango dancing in the history of tango:

Osvaldo and Coca perform to Francisco Canaro's "Poema"at Confiteria Ideal
Posted by Irene and Man Yung at 10:50 AM