Three and a Half Stories (In reverse chronological order)

While eating dinner with Osvaldo and Coca at Chiquilin, we asked them a serious question.

"Can we tell everyone that we are your students?" we asked.

Firstly, we didn't want Osvaldo and Coca to consider us the Chinese (or Japanese? or Korean? Argentinians find it so hard to tell) vaudeville act who've been stealing their steps from Youtube. Secondly, we wanted something deeper - to really learn from them, and to understand what Tango, in their opinion and experience, was all about.

"Yes, of course!" Osvaldo replied. He then proceeded to feed us his papas fritas and milanesa, right from his fork. "Eat this! This is the food of milongueros." At Confiteria Ideal (of all places, at least it was not Gricel)
February, 2007

We arrive at our first milonga in Buenos Aires, ever. Glorias Argentinas. The stuff of Tango legend.

As the taxi pulled up to the curb, Man Yung recognizes the gentleman standing right at the door of the club, chatting with some other people.

"Alberto! Alberto!" We rushed out of the cab and ambush a surprised Alberto Dassieu. There was so much we wanted to say - like, we think your performance in Milonguisimo is amazing, we are so excited and lucky to see you here, what a coincidence, etc. etc.

Alas, my spanish was limited and the only thing we were able to communicate was a thoroughly geeky enthusiasm. "Alberto! Alberto!" we said.

"And how is the weather in Tokyo?" asked Alberto, a little disconcerted at the sudden appearance of his tango fans and trying to be polite.

Three years later Alberto continues to be troubled by his failure to distinguish that we were not Japanese but Chinese. Paulina is still teasing him by telling everyone the story of our first encounter.

And all we remember from the incident was that we continued say "Alberto! Alberto!" for a full minute - jumping up and down like two giddy schoolgirls. 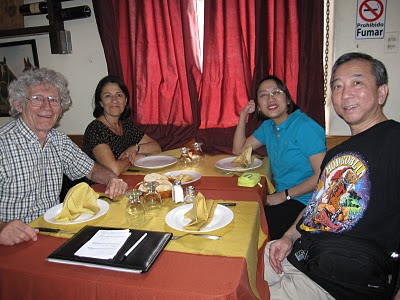 Paulina's recent remark to us: "Why is it that every photo we have of us together we are always eating or about to eat?"
Sometime in summer of 2006

Back in the days before Youtube, local Toronto instructor Elizabeth Sadowska was holding some kind of special event at her studio, Rhythm and Motion. While the milonga was going on, a video with rare footage of Osvaldo and Coca performing to Canaro's "Duelo Criollo" and "No hay Tierra como la mia" played in the reception area.

Man Yung was standing in the crowd in front of the television set, watching the video while sipping on his complimentary coffee.

"That's so amazing!" said Man Yung. "I wish I could learn how to dance like that!"

A tango senpai* overheard and snidely remarked to Man Yung - "You should study carefully then. IF you can dance like that one day, you will be able to do anything you like."

Man Yung rushed back to tell me what Mr. Tango Senpai said.

"Oh, really," I replied. I was thinking about Wal-Mart.

* Senpai: in karate terms, a senior student. A tango senpai not only has senority and has been dancing tango for longer, he is also thoroughly convinced he knows much, much better than any kohai (junior student) as he has taken more classes. Unfortunately, in some cases, "tango mileage" does not necessarily equate to "tango ability".

Martha and Manolo's first visit to Toronto. They were the guests of honour at Mad for Tango's Saturday night milonga.

Even before Martha and Manolo had arrived Man Yung had been studying Manolo's "Bridge to the Tango" instructional video. He was dancing some of the steps from the video but it seemed that Martha and Manolo did not notice. Everyone was showing off that night because the Maestros were present - who could tell anyway?

Then, when Man Yung went past Martha and Manolo's table to refill his drink, Martha stretched out her arm and stopped him in his tracks.

"Who is your teacher?" Martha asked in stern but uncertain English, glaring.

"You are!" Man Yung told me that it didn't even occur to him to hesitate.

Martha and Manolo talked excitedly in spanish between themselves. When did they teach such a strange Japanese/Korean/Chinese student? They were perplexed.

Man Yung demonstrated some of the steps that he had memorized from the video. Then he dragged me off the dance floor so I could help him communicate with Martha and Manolo.

Because in truth, Man Yung had got the corridita all wrong.

Forever then on (and apparently even before we had even met) Martha and Manolo have always been our teachers. 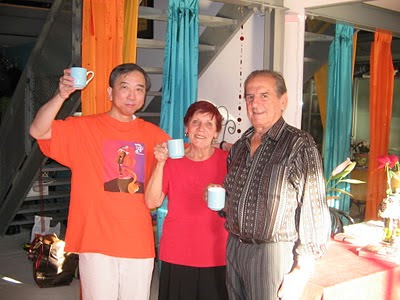 Do not be deceived, we were not drinking coffee. It was actually Wild Turkey's Rare Breed bourbon (one of the best whiskeys on the face of the planet). This is, after all, Tango.
Posted by Irene and Man Yung at 12:01 PM