...the ones who could recite the rule book in their sleep and broke the least number of rules!

Not to say that being the "Best of the Borg" after many many rounds of "Eliminate the Inferior Borg" isn't a tremendous accomplishment of skill, pluck and endurance. Congratulations to all, may you bask in the glowing glory of your achievement, wear the shiny victory crown of "Tango Salon Campeones" with pride, and even breathe an immense sigh of relief - that "quitting your day job as air-conditioner salesman to devote yourself to Tango" (or whatever) has paid off after all!

And isn't it great that the Championship has standardized all participants to make judging (and determining who is Best Borg) so much easier now? At the beginning of decade, it was so difficult to know just who was good and who wasn't - everyone did their "own little idiosyncratic Tango thing" and it was so pesky to try and tell the BAD apples and oranges from the REALLY GOOD apples and oranges. Now, of course, it is easy peasy. Makes the competition just that much more exciting to watch - we can live and relive every single excruciatingly cautious "Villa Urquiza" step of every single competitor in the comfort of our own homes, knowing that what "wins" can only be what is "right".

In fact, it reminds us of another glorious and exciting competition that never fails to rivet us to the TV screen whenever it is broadcast to millions upon millions of homes worldwide: 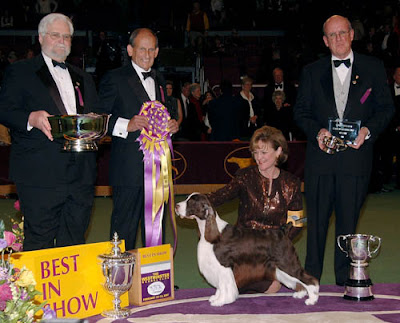 Westminster Kennel Club Dog Show
Come to think of it, what makes the Westminster Kennel Club Dog Show so great is kind of what makes El World Competition de Tango (Salon Division) so great. Winners are selected based on their adherence to tried and true standards of beauty and elegance - a tooth too long here, a tail too short here, an ear too droopy here, etc., simply would not do. Moreover, only those with the sleekest and shiniest coats, the most captivating personalities and the most "breed specific" gaits (God forbid that your Bulldog should trot around like a Scottish Terrier or vice versa!) will win.

That's the way a competition should be - lots of strict rules, and lots of points deducted for not following them. What a competition should not do is muck around with unquantifiable stuff like "Will your dog scare away burglars", "How much your dog loves you", "How great your dog is at catching frisbees", "How well one navigates a crowded dance floor", "How much of one's soul is in the dance" or "How one's dancing can move the audience to tears" - if we are going to go into vague nebulous grey areas like that, the competition could last year round and still we won't be able to come up with a clear winner.

Lucky for us in El Mundo de Tango, we have a Competition and we have Winners. Following the wonderful awe-inspiring example of the "Winners", we too are now inspired to quit our day jobs to devote ourselves to Tango. Maybe it will be a one-year retirement, or two years - or even forever - but however long it takes, and how many mountains we have to climb (or how many rule books we have to memorize - Irene made it through law school so learning a couple of rules by heart shouldn't be that difficult) we will never cease to aspire. 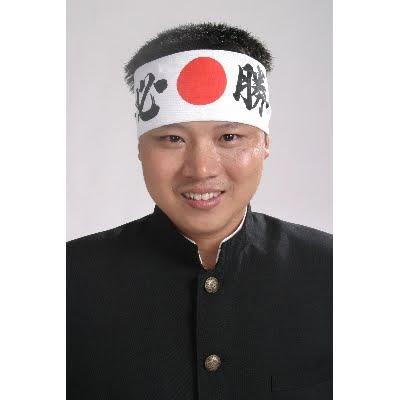 "Hissho", also known as the Japanese spirit of "Victory" -
a.k.a. "I can't possibly lose this competition AGAIN because then it'll look really, really bad"
TO THE WINNERS: You are inspiration for all those who come after you who haven't yet composed the greatest symphony ever heard, written the Great American Novel, earned more money than Bill Gates, or broken the most Olympic records in the history of the Olympic Games. You have given them the precious gift of HOPE that yes, yes, YOU (and I mean YOU! Meaning him and her and them and not really "you" as in "you guys over there who have already won the competition") can still matter (eh, maybe not in the "Real World") in TANGO - the greatest invention of humankind since the wheel.
Posted by Irene and Man Yung at 7:55 PM