(Not Quite) Naked Tango

Man Yung is always giving me lectures on how to achieve a zen like state of mind when I'm following.*

One of the pithy chinese sayings he likes to repeat ad nauseum at me is that I should dance with a state of mind in which "not a single silken thread is hanging". 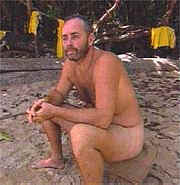 Richard Hatch:
Naked and Proud of it!
I don't think that I'm quite ready for such extreme mental states of, ahem, naked-osity. In fact, I thought the trick to being nice and calm was to imagine that ALL THE PEOPLE AROUND YOU ARE NAKED, and not that you yourself are shimmying around in a milonga without so much as strategically placed band-aid.

As it is, I can hardly bring myself to accept the spectacle of people wearing pajamas in public places: 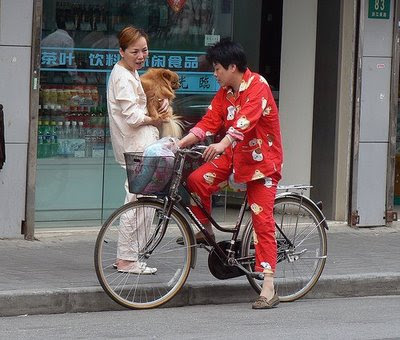 "Top o' the mornin' to you, dear!"
I'm not making this up! It is totally true! And not only in Shanghai, China (where really nice quality jammies are a status symbol - and where else better to one-up your comrades but right there in the street in full public view?), but in Toronto, Canada, as well! 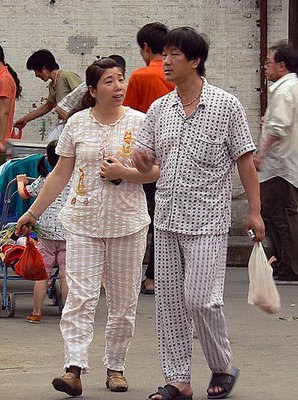 In these cases, slippers are optional
If these people were wearing leather and latex sleepwear or frilly see-through negligees it may not be so disturbing - maybe they are celebrating early Hallowe'en, or perhaps they are just wacky loveable attention-seekers.

But no! They are entire families taking a walk in the park, or people eating at a restaurant, or even people going to see their accountant! Just last night we couldn't help tailing this blissful, pajama-clad couple around the meat and poultry section of T & T Supermarket at Warden and Steeles - she in a blazing "bride dowry" red silk affair with tassels, and he in a cotton cream and blue patterned set that was worn so thin that well, you really didn't have to imagine what was "flapping in the wind".

It was not that they looked kind of strange (even though they did - but hey, who are we to judge - isn't Irene and Man Yung the Tango equivalent of Toxic Waste?) that was remarkable - it was that they were TOTALLY OBLIVIOUS (or truly didn't care) that there was any standard of publicly acceptable fashion any different from their own.

Aha, I get it now. What Man Yung is trying to hint to me is that whenever we dance, we should be as oblivious as the pajama clad duo - because the most important thing is that we are holding hands and feeling real comfy (while shopping for chicken feet and fish heads)!

*Easier said than done! If it was a breeze just to "zen" out, then we'd ALL be a lot closer to Nirvana rather than Hell (now in assorted flavours!)
Posted by Irene and Man Yung at 4:48 PM