There was a massive blackout in Toronto last week. 22,000 people were left without electricity and HEAT on some of the coldest nights this winter in Toronto's west end. Here's a photo from the CTV.ca website showing the extent of the area affected: 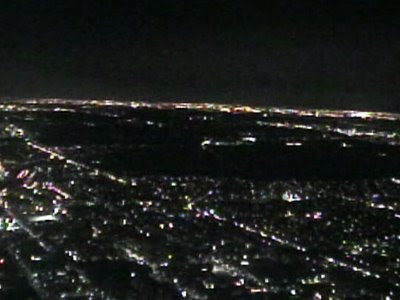 Aerial view of Toronto 2009 blackout
And right smack in the middle of it was our favourite milonga with the BEST MUSIC IN TORONTO (my apologies to all you other venues making this advertising claim - you simply haven't convinced me otherwise. Write to me and I can tell you exactly why).

So obviously, no tango on Friday night. So what to do with so much free time?

We break out the knitting. More precisely, the Alice Starmore designed "Mary Tudor" sweater I have been working on since........ 2004: 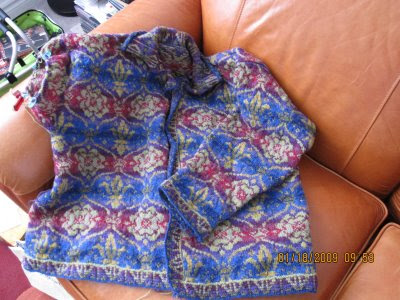 I have been crawling at a snail's pace on this project, when I used to be able to finish a sweater in a month or two. Man Yung has been nagging me and nagging me (and nagging me) to finish this sweater, but there's something incompatible between complex Fair Isle knitting and having to prepare oneself mentally for courses on the postmodern aspects of "Pain". Since that's all done (FOREVER. Yeah!), it's back to the knitting - I've only got one sleeve left, and I managed to accomplish about 15 rows while Man Yung channel-surfed. 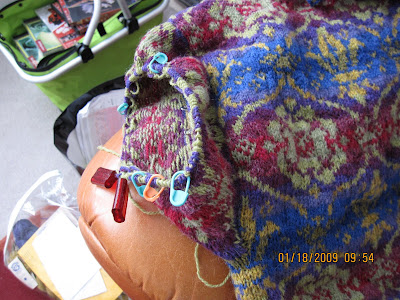 Let me make an analogy for you: Fair Isle knitting (knitting with two strands of colour at the same time - typical of the Fair Isles in the north of the United Kingdom, and encompasing some kinds of Scandinavian knitting as well), Aran/Guernsey knitting (fishermen's sweaters - knitting with one colour with cables and repetitive stitch patterns) and Lace knitting are to traditional knitting like Milonguero style, Tango Salon and Tango Fantasia are to traditional Tango. Designs by designers like Alice Starmore, Ann Feitelsen, Gladys Thompson, Solveig Hisdal, in particular, will enable you to create heirloom sweaters that will be classics for ever - you won't be ashamed to pass these to the next generation! If you haven't tried one or all of these knitting styles, all you are doing some sort of trendy knitting easily encapsulated by the latest edition of "Vogue Knitting". Nice for a season or two, but not keepers. For me, if I'm going to do knitting like this I might as well buy my knits at the store - they can mass produce lots of them cheaply using machines.

Here's a shot of the floating strands on the inside of sweater - while one colour is being knitted in the front, the free strand "floats" behind it, creating a reverse colour pattern on the inside of the sweater: 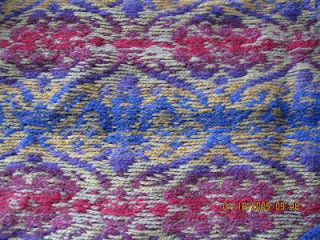 One feature of the wool used for traditional fair isle knitting is that it sticks together and won't unravel easily. Part of the technique is to create "steeks" - and CUT through the centre of the steeks, like for the front band, and then knit up at the edge of the steek. It is not really as scary as it sounds: 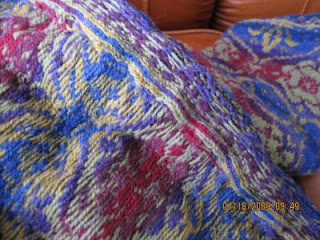 Here's the front band from the front: 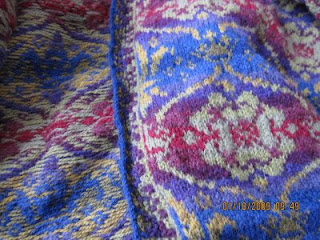 Eventually (hopefully sometime this lifetime) I'll end up with a sweater that looks like this: 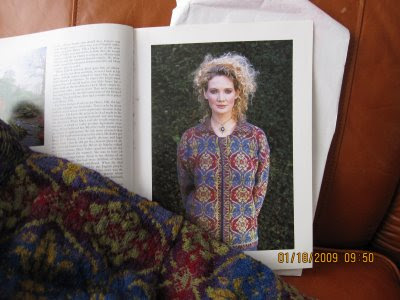 If you aren't dancing tango right now and you want to gawk at more knitting, go to Wendy Knits - a fabulous traditional knitter with photos of all her finished works. Alice Starmore's website is another great resource.
Posted by Irene and Man Yung at 11:23 PM

Irene, this is exquisite work! And I love the colors too.

I can't even imagine the necessary patience to create such a thing.

When you finish it, it's sure to be a family heirloom--or a museum piece!

Thanks for your comment! It frightens me to think just what else we can accomplish if we were not using up all our energy obsessing about tango steps, tango music, tango gossip, tango shoes, tango blogging etc. etc....

Hi Irene,
My mother & grandmother were master knitters. While knitting they could watch t.v. without dropping a stitch. They tried often to teach me and of course many times I began a project but couldn't finish unless my mom or grandmother helped. Basically they knitted most of the items and then finally I gave up this wonderful endeavour as I realized I could never be half as good as they were. I really appreciate the efforts that all you knitters make to engage in this activity. Good luck in finishing this fabulous item.
Patricia from Paradiso

My mom used to knit and sew as well. She also tried to teach me to knit but made it seem too complicated - by the end of her "instruction" I was just too scared to knit anything! She was also always "helping" so whatever I learned never stuck.

Many years later I just picked up a book on knitting from the library and taught myself. I made lots of mistakes along the way (my first sweater ever was completely knitted through the wrong side of the loops - no wonder all the stitches were twisted) but I persisted. Once I got going I found that knitting was easy and simple. This Mary Tudor sweater, for example, may take patience and time, but there's really nothing to it - after all, it's all just knitting and purling!

Having at one time tried knitting, I am speechless (does that apply to typing???) with admiration. This sweater is not only stunning, but incredibly complex, no matter how much you try to play that down.

My grandmother was a master knitter; I have friends who still recall a navy blue knit coat with a red faux leather collar and buttons.

Thanks for enjoying the sweater-in-progress - as for the stunning and complex parts, I have to give all the credit to the designer Alice Starmore!