Should've known better (I told you so) 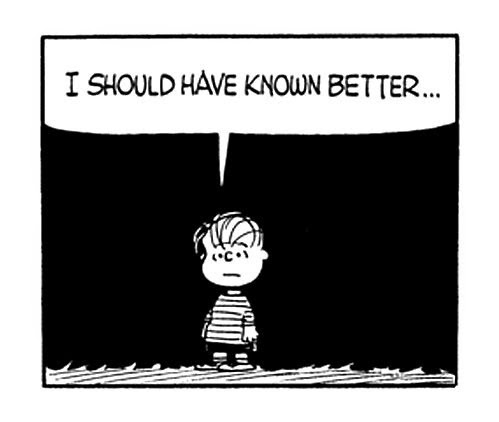 It was already 10:45 p.m. after we had finished practicing at the rental studio space last Thursday.   Still, Man Yung wanted to watch the videos we took of our practice, so here I was near midnight trying to download the videos from the memory card to put on Man Yung's iPad.

There was a glitch in the download.  The happy spinning beach ball of paralysis and death appeared on screen and everything got stuck.

I panicked and forcibly turned off the computer.  Should've known better than to do that - because when the computer came back on, all the videos we took were gone. Kaput!  Erased!

I let out a blood-curdling scream.

"What, you lost all the footage!" exclaimed Man Yung between shrieks of terror.  "That was the best practice we ever had!  If we put those fantastic videos on Youtube, we would get so many hits we would become millionaires!"

The milonga floor was less than desirable - something to do with the combination of ancient warped floorboards and a merry coating of varnish that made the floor look shiny but actually turned it impossibly sticky.

"Don't pivot so much on the floor!  Try to just walk slowly if you can," I hinted strongly to Man Yung.  "If you spin, your foot will be stuck in place while your whole body rotates - and this will be no good for your creaky old joints!"

Ha ha - "Knowing what he was doing" consisted of doing even more turns and spins than usual.  It's been a whole week since Man Yung has danced and there were so many steps from Youtube he wanted to try out!

"Ouch!  My knees are so sore!" Man Yung said the day after.

I told you so.

It was the day of the milonga and we still didn't know who the DJ was going to be for the milonga that night.  We scoured the milonga website and Facebook page to no avail.

"Why couldn't the organizers give sufficient warning about who is playing the music?  There's less than 8 hours to go and still no news!"  said Man Yung grumpily.

We wouldn't normally be so concerned....but we really, really wanted to skip the milonga if a certain DJ was playing.

"I have to admit, I am very impressed by the DJ's vast collection of Canyengue music.  It seems like the DJ has every single piece of recorded Canyengue prior to 1915," I said.  "It's just too bad that the DJ has to use every track in this historic collection - every night, all night, every tanda, all the time!"

The last time we experienced this DJ's music, the music was so monotonous and soul-suckingly boring that not only did we not want to dance, we wanted to kill ourselves.

Man Yung was getting so antsy (he really wanted to dance) I did the unthinkable - I contacted the milonga organizer by phone and by Facebook.

The milonga organizer called back.  "DJ Canyengue will be playing.  See you guys tonight!"

I faithfully reported this to Man Yung.  Man Yung slapped his forehead and rolled his eyes to the heavens.

"Irene, you should've known better than to contact the organizer.  Now the organizer knows we called (Toronto Tango is a small world), they are expecting us to turn up at the milonga.  It would be rude not to go!"

"I have no scruples about not going," I said.  There are benefits to being raised by a pack of wolves.

"Unfortunately, I have," said Man Yung.

The other benefit of being raised by a pack of wolves is that I could spend the entire milonga with my feet up and head thrown back while snoring with my mouth open.  Haven't had such a refreshing nap in a long time!

It was late.  The milonga was almost all cleared out.  I was busy playing Plants and Zombies (the original!) on my phone while waiting for Man Yung to finish dancing.

Suddenly some guy appears in front of me.  "Would you like to dance?" he asked, annoyed.

Too many hours of playing games on my phone had numbed my brain.  Instead of saying "No", I said "Yes."

"Thanks," we said to each other at the end of the tanda.  What we really meant was "No thanks!"

"I told you so," said Man Yung after I returned to my seat.  "There's a reason why the mirada and cabeceo are so important in Tango.  The dancers have to observe the other dancers to see who they want to dance with - and then try to get the dance with their eyes!  When the mirada and cabeceo are willingly returned, that means both dancers are already willing and happy to dance with each other, and there's going to be much more harmony and accord when they do dance.  It's much more elegant  than this ambush bullshit!"

"Man Yung, are you really giving me this advice about not ambushing people in tango?" I said incredulously.  "Didn't you just recently tell me to be more aggressive with my eyes, and stare at people like they owe me money and if they don't dance with me, I will kill them with the laser beams implanted in my pupils?  And if they by any chance get away, you were going to beat them up when they went to the washroom?"

Man Yung shook his head.  "No, Irene, you totally misunderstood me.   I distinctly recall I advised you to be sweet and gentle in your cabeceo and to smile more and act friendly."

Oh really.  Read our post here and judge for yourself!