On the success (or failure) of a Chinese Restaurant in Scarborough 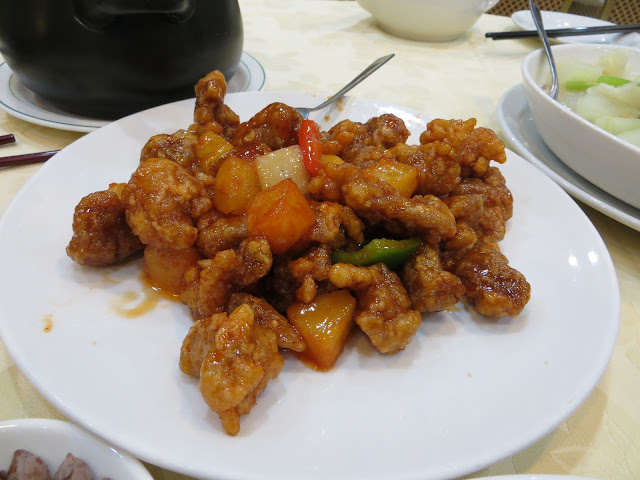 Remember this?  It was pretty traumatic, having our favourite chef and all the waiters walk out all of a sudden.  It was not a pleasant surprise - I believe we dropped our chopsticks in shock at the news.  Where were we going to eat?

We are happy to report that we are still eating at the same restaurant.  Even though the business has changed hands like, three times in two years, things have stabilized with the current owners, kitchen and waitstaff and we didn’t have to hunt for another place for yummy chinese food.

“So what makes a Chinese Restaurant succeed?  And what makes it fail?” asked Man Yung between bites of piping hot crispy roasted chicken (one of the current chef’s signature dishes).

1.    Great food helps...but doesn’t guarantee that you will have lots of customers

The first restaurant had a head chef/owner who used to work at a very prestigious seafood restaurant before he opened his own place.  His cuisine was absolutely delightful - from the basic Stir Fried Beef Rice Noodles and Seafood Fried Rice, to the very special (actually, quite unusual) Bitter Melon and Black Bean Sauce with Lobster, or Goji Berries and Chinese Herb Freerun Chicken Shabu Shabu.  He had a magic touch.

The great food made us repeat customers - but the chef kept on complaining to his staff that he wasn’t getting enough business.  In fact, there were always only a few tables of customers having dinner at his restaurant in the evenings.  What was the problem?

“Do you remember how the head chef always complained that he didn’t have enough ‘Family style customers?’” said Man Yung, “and that families simply stayed away from the restaurant during the evenings?”

“Yes, I remember.  Why, didn’t they like the food? We thought the food was tasty.”

“Well, the problem was the food was too special and too unusual - and it attracted the wrong type of customer.”

Yep, the waiters would come around recommending nightmarish dishes like “Sea Turtle Hot Pot” and “Screaming Wawa Babyfish stew” (it’s a fish that makes a high-pitched noise like a shrieking fetus - you don’t want to know) - we said no, but they were heartily gobbled up by rough-looking individuals who shouted when they talked, laughed outrageously with open mouths filled with food, expelled profanities every second word and thumped the table for emphasis.  What a strange lot they were - they had loads of money and were looking for culinary thrills.

We didn’t mind their shenanigans so much but we started to frequent the restaurant more for lunch than for dinner.

Man Yung analyzed the scenario for me.  “The regular chinese “Family” dining crowd stays away from restaurants with weird (even illegal) delicacies like turtle, wawa babyfish, bear paw or roadkill venison

- as well as restaurants with shady-looking patrons who are openly cussing, gambling or playing drinking games (and getting stinking drunk).  Is it all that surprising that despite the tasty food, the first restaurant was not an overwhelming success?”

The first chef got fed up and left and the restaurant was taken over by a former restaurant manager.  He didn’t know how to cook but he thought that he could keep the food standards up by terrorizing the kitchen staff.  Half the time we were there the owner was yelling at somebody.

Chefs didn’t stay long under this kind of abuse, and the food suffered.  One day my Pork tripe with Mustard Green soup noodle would have intense ground pepper flavour , the next day the same dish would have too many chives and garlic sprinkles, and the day after that there would be no chives, no garlic sprinkles, and more noodle than tripe, and the day after that there would be more tripe than noodle but with plenty of green peppers etc.  Every chef had his own interpretation of the menu and although they tried their best, we got tired of the roller coaster standards and started to eat at the restaurant next door.

“Why is this restaurant always so busy?” I asked Man Yung.  “If I had a choice I wouldn’t come and eat here.  The food tastes like someone forgot to add salt.”

“Well, the patrons here might like the food - maybe they are health conscious and think flavour would kill them.  Or perhaps they have gotten used to the style of cooking - and every time they want, for example, blah blanched whole chicken or insipid soy sauce tofu (they NEVER had enough soy sauce in that dish - we always had to ask for more on the side) they can always come and eat and get exactly the same dish they ordered the last time.”

There’s a restaurant just half a block away that is the exactly opposite - the seasoning was always heavy-handed and the sauces were always way too thick, like congealed phlegm.  And there’s another restaurant two blocks away where the dim sum contains meat that has been ground so thoroughly that it feels like toothpaste on your tongue. But those places were always packed too!

Now, I’m not saying that if you served food that tasted like you just boiled everything in water or food that is oily, salty and drowning in thick lumpy sauces you would be a roaring success.  However, if you keep the food consistent(ly bad), you might attract people who like their food watery/chunky/pasty.  Because there’s no accounting for taste and there’s lots of people in the world who can’t tell well-prepared, delicious food from badly-prepared, gross-out food.

3.  If there’s someone working in the restaurant who rubs you the wrong way, you will just stop going there.

We patronized the restaurant next door because we got pretty chummy with the waiters and we were too lazy to go out and try any other restaurants.

We only stopped going because a new waiter started working and we hated him.

“Why does he always have an expression like someone has killed his entire family?” we asked each other.  “When he comes over, he throws the menu onto the table.  When he takes our order, he doesn’t nod or say anything or even react - he just wanders off when he thinks we are done speaking.  When he brings the food, he just shoves it into any available space on the tabletop.  When we want to pay and leave, he snatches up our cash without a thank you.”

After a few weeks of this, Man Yung was prepared to go back to the first restaurant - inconsistent food or no.  “I can live with the tasteless food - but I can’t stand another minute of that kind of service.”

4.  You don’t have to be the best restaurant in the world but with all the right ingredients you can still be a success!

We returned to the first restaurant - by now, the belligerent owner/manager was gone (he gambled away his shares - one sure way to ensure restaurant failure is to gamble your restaurant away) and the restaurant was being run by the sous-chef and his brother.

Now, the sous-chef had been there since the beginning.  He wasn’t a brilliant chef - like, he couldn’t pull any rabbits (or turtles, or shrieking wawa babyfish) out of a hat (or a wok) and he probably wouldn’t be able to get a job as a head chef anywhere else.  We thought - uh-oh, this restaurant might be changing hands very soon again....

Pleasant surprise (for once!)  The restaurant business started off slow, but gradually it got busier and busier.  Now, whenever we go for dinner, there are lines forming outside the door and there are plenty of “Family” style customers filling the tables.

The sous-chef wasn’t a culinary genius - he and his brother didn’t put their effort into making very inventive or unusual dishes.  Their signature dishes were crispy roast chicken, and sweet and sour pork - every restaurant has these items.  However, they made them fresh with care and almost every table ordered a plate of one or both.  They stuck to the basics - beef, chicken, pork, fish, the most widely available vegetables, common shellfish, rice and noodle dishes - and put their heart in it.

And the customers kept on coming back.

We didn't wait for long...we ordered a dish of Sweet and Sour Pork and a dish of Braised Eggplant with black fungus and bamboo shoots, and steamed rice.. for dinner at the Hilton on the big island of Hawaii. Delicious. The chef is from Hong Kong. The pork was crispy and the sauce was just right. We topped it off with lychee sorbet.

Your menu choices sound like a slice of heaven! Usually, it is so hard to get good chinese food when we travel (except if we were like, traveling to Hong Kong, or Taiwan, or Vancouver!)and you were able to have this great chinese meal in Hawaii. When we ate chinese food in a restaurant in the street behind our hotel in Buenos Aires, the food was so "bleh" Man Yung said, "I could do a better job than that!" Indeed, we saw some "chef wanted" signs in Buenos Aires - Man Yung should just apply and he could be chef by day, milonguero by night!