A shoe on top of your head 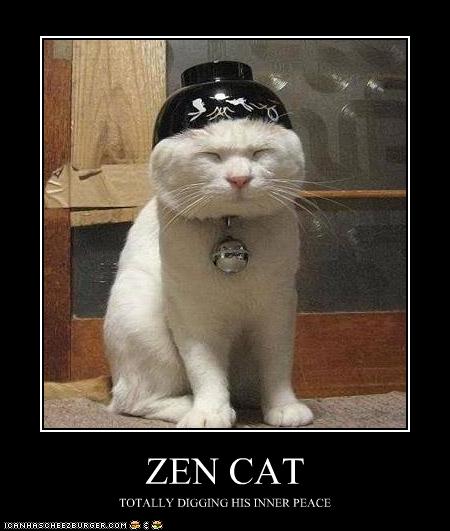 ....or a bowl
Over the weekend, Man Yung told me about one of the Zen stories in the history of Buddhism that kind of bothered him.  It went something like this:

"Some monks in a monastery in China a long long time ago started to keep a cat as a pet.  Under the teachings and rules of Buddhism, monks are not supposed to keep pets, but they kept this a secret from the abbot.

Word of this disagreement reached the ears of the Abbot.  The Abbot asked the arguing monks to be brought before him - and they came, ashamed for breaking the rules, but asking the question - who does the cat belong to?

"Let me resolve this for you," said the Abbot.  "Whoever can come up with the most convincing argument under Buddhism that they are entitled to the cat will keep the cat.  If you cannot come up with a good reason, the cat must be killed."

Neither faction could come up with a good reason (under Buddhism).  So the Abbot ordered the cat to be put to death.

The Head Disciple of the Abbot was away from the monastery when all this hoopla occurred.  When he came back, the Abbot told him what happened and asked him what he thought.

After hearing the story, the Head Disciple took off his shoes, put them on his head, and walked off.

"Ah!" said the Abbot, nodding his head in agreement.  "If Head Disciple had been here, the dispute would have been resolved quite amicably, and I would not have to put the cat to death!"

After hearing the story, I was completely outraged.

"What a crock of $#%@!!!!, " I said.  "I know what I'd be saying to the Abbot - I'd say: Goddamn your rules and regulations! I'll give you a good reason why Mr. Kitty is coming with me.  If you so much as harm a hair on my cat's head, I guarantee that I will hack you into little pieces and serve you up as freshly steamed meat buns!"

"This proves that you have not yet attained enlightenment, and that you don't understand the story" said Man Yung quite sagely.  "Let me break it down for you!"

1.  Under Buddhism, monks are not supposed to keep any pets, or have any attachment to any material or earthly thing;


2.  Under Buddhism, monks are supposed to be serene and not supposed to fight or argue over anything - let alone pets;

3.  Therefore it is impossible to make any argument under Buddhism as to the ownership of the cat (or as to any other thing);

5.  Accordingly, the correct response to all of this is to put your shoe on your head, i.e. an absurd response to something completely absurd; And Lastly:


6.  This is only a story and none of it happened (i.e. Come on, Irene!  Did you really think they'd take Mr. Kitty to the back of the building and make a soup out of him?  By the way the monks aren't supposed to eat meat.  And what would they feed the cat in the first place?  They can't kill anything so they can't feed the cat meat anyway)

"So you see, Irene, the whole tale revolves around absurdity - the story can only be a story as it fails several levels of logic in its right context.  Kind of like the visiting (or is it now local?) Tango professional who thinks he's dancing and teaching Tango.  He is apparently unaware that the general consensus among Toronto Tangueros and Tangueras is that he is not really doing either - but merely dancing with himself!"