A whole week without Tango! Unthinkable, but true.

I was too sick with the flu to dance - too sick to even turn on the computer to check emails and blogs or surf Youtube for the latest in "el mundo de tango". In fact, I was too busy waging war against the demons of fever, cough, mucus and phlegm to even think about dancing.

Man Yung didn't get sick - but he claims that he was so stressed watching me be sick he developed an itchy rash! Poor Man Yung. No tango for a week and a rash. I'm sure it would clear up in no time - after a couple of tandas of dancing, that is.

I must be feeling better, because today, after a whole week of not wanting to eat anything but soup, I suddenly crave asado! I wish someone would invite us to a barbecue - after all, it's Canada's Victoria Day long weekend, and there's nothing like a good, fiery bbq to celebrate the holidays. 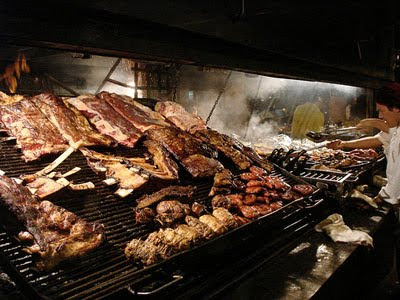 A very big asado
But who am I kidding? No Canadian homestyle barbecue can compare to the mighty Argentine asado. 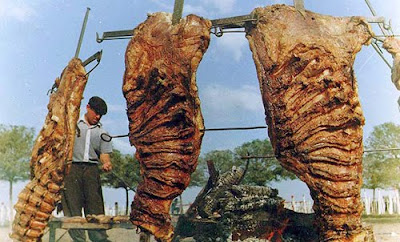 Another very big asado
In Toronto, no backyard is complete without a gleaming, stainless steel, top-of-the-line Canadian Tire (or The Bay) propane barbecue grill. My parents had one - even though they didn't use it more than two times in ten years. My brother just bought his own house - and even though he is now saddled with huge back-breaking monthly mortgage/property tax/utilities payments, he went right out and got one too ("But it was on SALE!" he said). Perhaps there's this secret rule that you aren't an adult until you grill? No wonder my mother still treats me like an infant.

Oh, the big fuss my brother makes for his barbecue! He makes several runs to the grocery store for groceries and party supplies. He stays up into the wee hours the night before tidying the house, making salads, mixing drinks and marinating meat. And on the momentous occasion itself, decked out in full barbecue-wear and wielding his "tongs" and "prongs" (this is how ignorant I am of barbecue utensils), he is nothing less than the Lord of the Grill - like the volcano god Hephaestus ruling over his domain of flames and fire.

I don't have the heart to tell him - propane makes the meat less tasty! Your barbecue machine may have the most amazing features known to man - but when it comes to taste, you might as well use a WOK.

Let me tell you about the best asado we ever had. Rewind back to May 2006. Martha and Manolo had just wrapped up their classes in Toronto - they already had their general despedida with the other Toronto students, but they and their amazing, kind Toronto hosts Lisandro and Tatiana decided to throw one more small, private goodbye party the day before they had to fly back to Buenos Aires.

It was at this party that we tasted the best asado ever. Nothing would ever compare since.

Martha and Manolo were in charge of making the asado. Martha marinated the meat, and Manolo grilled it. It must have been the smallest barbecue in the world - no bigger than a laptop computer, it was just a metal box with a metal grill on top.

Into the metal box went the charcoal. On the grill went the meat - every square inch of grill space was filled. They balanced the grill on the concrete wall in the alleyway next to the studio - occasionally cars would pass by on the way to the small parking lot at the back of the building. Manolo set everything up, covered it, and barely checked again.

When the sun finally set and the alleyway was lighted by the fading indigo light from the sky and the palid white lights from the streetlights, the meat was done.

It was well-done, of course - that's the Argentine way of asado. But it was tender, and it tasted amazing. It needed no sauce to be absolutely, mouth-wateringly appetizing. Every Argentinian says their personal way of cooking asado is the best way of cooking asado. But tasting Manolo's asado, we had no doubt at all - his asado was the BEST.

All that was necessary for the best asado we ever tasted was a little Argentinian beef, seasoned with salt; a tiny charcoal burning grill; and the loving (but never fussy) attention - of a Tango Master. It was an asado... with compas.

Happy Victoria Day weekend to all!
Posted by Irene and Man Yung at 4:50 PM

Email ThisBlogThis!Share to TwitterShare to FacebookShare to Pinterest
Labels: Cooking, Martha and Manolo