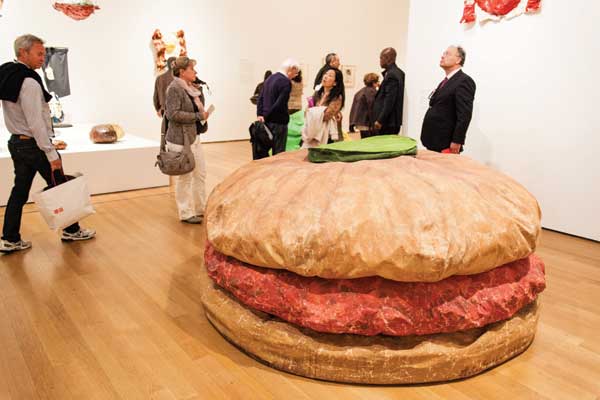 With the right state of mind, even this hamburger made of cloth and stuffing can be the most delicious meal you've ever had in your life

Man Yung didn't used to be a fan of hamburgers.

"But they are so delicious!" I protested.  "One of the most memorable meals in my life happens to be hamburger.  I had stopped in Aberdeen (on Hong Kong island) on the way home from school - probably to go to the library.  I hadn't had lunch but I didn't have a lot of money, so I went to McDonalds and ordered the cheapest sandwich they had - a plain hamburger with nothing but ketchup, onions and pickles in it.  Eating the hamburger super slowly while watching construction work next to the bus stop and waiting for the bus was a slice of heaven!  It was a taste explosion.  I relished every single bite."

Man Yung scoffed.  "Ah.  But you must have been very hungry."

"You obviously didn't go out much," said Man Yung, still scoffing.  "McDonald's hamburger! Objectively speaking, how could a hamburger taste better than a perfectly grilled t-bone steak?  Or 8 course omakase dinner at Kaji?  Or even stir fried double lobster with ginger and onion sauce?"

Although all experience is in truth subjective, I nevertheless set out to find the most objectively delicious hamburger for Man Yung, just to prove a point.  It wasn't easy.  The ones at the fast-food franchises are yucky and filled with preservatives.  He grumbled at the $15.00 loaded Angus beef hamburger at upscale burger joint M Burger, and found it dry and tasteless.  He refused to have the expensive ones with foie gras, truffle sauce and beef raised on Mozart and shiatsu massages.

I agreed, any burger costing more than $100 (or even $20) was kind of taking it overboard.

Ultimately, I made him a hamburger at home using one of Cook's Illustrated's recipes.

Bingo!  Man Yung had a taste and then looked at me in astonishment.   "Irene, you are right!  Hamburger is one of the most tasty foods around!"

So I kind of won that one...for the moment.  But it was easy for Man Yung to forget how great that burger was.  He starts scoffing after a while, like he couldn't believe that a humble burger could ever beat a plate of deep fried free range chicken marinated in fermented red tofu sauce (for example).  Or he would want to do something fancy with that burger, like put aged grated chenpi (mandarin orange peel) it, or eat it while standing on his head.  Or use a cut of beef of lesser quality.  Or a bread that is different.  Or skip the cheese.  Or pair it with an expensive red wine instead of the cheapo $8 Fuzion Shiraz Malbec we always get at the LCBO.

"Man Yung!  Stop experimenting," I said.  "The hamburger is good in and of itself, and it goes fine with the wine we were having.  It doesn't need to be fancied up."

"But you know I like to push the boundaries.  I cannot be satisfied until all possibilities have been tried and exhausted!" he said.

I don't argue.  I just serve hamburger again.  Man Yung will start eating, refusing to taste it at first due to mental clutter.  And then, in a moment of quiet, when his mind has emptied out....

"Wow Irene!"  He will look at me in surprise.  "How come?  This is one of the best foods I've ever tasted.  Hamburgers are amazing!"*

* If only his mind would empty out like that when he is dancing!  Then he will realize that any tango he is dancing with me is amazing.  Instead, he gets all grumpy, spazzing out on the new steps he is attempting to replicate from Youtube because I don't get them right away.  And he wonders why dancing with me yesterday was not as great as dancing with me last week, when he hadn't been watching 150 hours of tango on Youtube!  Hurrrrrumph.

For the curious, here's the recipe we have adapted from the Cook's Illustrated cookbooks for pan-fried hamburger - it's our own lazy version, but the results are good enough for us!

1 to 1 1/2 lbs of beef (Skirt steak or flap meat is the best, with a good balance between taste, gristle and fat, but is hard to find.  Deboned short rib is also good, rib eye and flank steak also acceptable)

Sliced cheese (Real cheese, not processed cheese or spread.  But you don't have to be really fancy - Cracker Barrel or anything like that is good enough.  We use Cracker Barrel sliced mozzarella)

1.  Pat the beef dry with clean paper towel.  Mince the beef either using a food processor or preferably manually using a chopping board and meat cleaver.  People familiar with cooking chinese cuisine and a dish called "Yuk beng" or steamed minced pork will know what we mean - you just chop the meat manually until it has the consistency of a a very course grind.

2.  Shape the ground beef into four equal patties.  Don't smoosh them smooth though, the patties should be loose and rough on the edges.

3.  Season the patties on both sides liberally with salt and ground black pepper.

4.  Heat your frying pan to medium low heat.  Put a pat of butter on the pan and once it melts (which it will pretty quickly) spread the butter evenly on bottom of the pan. Put two split hamburger buns  (four pieces total) interior side down onto the pan.  Squash the buns lightly down onto the pan into the hot butter with a fish slice/turner/spatula, checking the side of the bread on the surface of the frying pan after a few seconds to see whether it has become toasted.  Once the bread is toasted a golden brown (around 30 seconds to a minute), remove them to a plate toasted side up.   Add butter to the pan, repeat with with the remaining buns.

5.  Turn the heat up to medium high.  Add a pat of butter, spread on bottom of pan and add the beef patties into the melted butter to start frying the patties.  Do not move the patties once placed in the pan.

6.  After about one minute, when the edge of the patties start to look cooked and gray, turn the patties over with the fish slice to fry them on the other side.  The side that was fried first should be specked with a cooked crust of a light to medium brown colour.

8.  Remove the patties and place them on top of the buns.

The hamburgers using the above method should come out rare or medium-rare, depending on the heat of your stove and the amount of beef in your patty.  Add whatever condiments you like on your burger.  I like to top with sunny side up eggs and bacon with mustard, mayo and ketchup.  Man Yung just eats it plain.   Serve with cheap and cheerful red wine.  Try to eat them with full and sudden consciousness!  They will be the best that you have ever tasted (subjectively speaking).

"Try to eat them with full and sudden consciousness"
:) :)