A Tango Story (without Tango)

It was late afternoon by the time we left Alberto and Paulina's apartment. We emerged from the shadows of their lobby to the golden glow of the tree-lined street behind Abasto. Thinking about the flight we would soon have to take to return back to Toronto, we walked slowly to the intersection to catch the taxi that would take us back to our hotel.

We flagged down the first taxi that came along. The driver was clean shaven man of about forty. He seemed to us somewhat cold and detached - responding curtly as we said good afternoon. We shuffled into the back seat of the car. "Callao and Santa Fe", I said.

The driver repeated my instructions - however, instead of saying Callao with a hard "g" sound in the way of the Porteños, he pronounced it with a "y" sound. And what an odd, drawling accent he had. 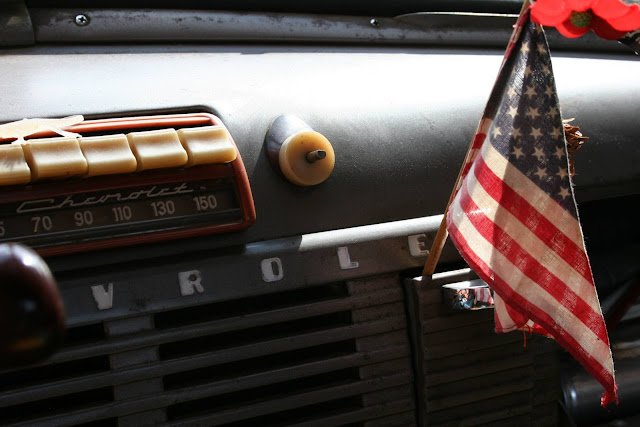 A mini American flag hung proudly over the dashboard. Too curious, I had to ask. "Es usted Americano?" I asked.

"We're from Canada. You must be very brave to be driving a taxi here!" I said.

The driver continued to reply in Spanish. It took him some effort to speak and the words that rolled off his tongue were slow and stiff, like he was reading phonetically from a language instruction book.

"Oh, it is not that difficult. People want to go to the same streets. If it's somewhere I haven't gone before, my passengers will tell me how to get there. And if they can't, I have a map."

"What about the mad traffic?  I'd be too scared to drive here with every car trying to cut in and force everyone else off the road!"

"I used to be in the Marines, so I've seen worse.  You just need to keep calm, and you will get to where you are going."

It was the weekend, so even though the streets were filled with people, the road was relatively clear and our ride was smooth.  "Your Spanish is very good," I said.

"I practice with my passengers.  Right now I am practicing with you!" I think he was smiling.

Not that I was that helpful as a practice partner.  Although my pronunciation was better my vocabulary and my grammar was not as good as our cabbie.  Nevertheless, I had the feeling that it was easy for him to talk to me.  We were just two gringos in a foreign land, talking the best we can in our broken Spanish.

"How long have you lived here?"

"Do you miss the States?"

"Why did you choose Buenos Aires?  Do you like it here?"

"No, this country is crazy!" he exclaimed.  "The politicians are inept, the people are insane, and everything is completely disorganized!"

Yep, he's been here long enough not to have any more illusions, I thought.

"You must be here because of true love," said Man Yung.

Our driver turned the corner - we had reached our destination.

I think there must be a Tango out there, written just for him.

A US marine driving a taxi in BA?! hard to picture, very hard, it definitely makes you wonder.... what's his story, one for a tango ... or something else... like under covered? Would love to run into that taxi when I'm there.

A US marine driving a taxi in BA?! hard to picture, very hard, it definitely makes you wonder.... what's his story, one for a tango ... or something else... like under covered? Would love to run into that taxi when I'm there.

That's what we were thinking too about this mystery marine. What is his background? How did he end up driving a Taxi in Buenos Aires? Is he running from something? Or did he move to Buenos Aires for someone he loved, and it didn't work out? Or are we just being silly with all our guessing?

One thing that we are pretty sure of though - when the Portenos see Man Yung standing on the corner trying to flag down a taxi while wearing a hat, a faded worn out beer t-shirt, tattered khakis and bright red crocs, they are not thinking anything romantic. They are probably thinking: "He works in a Chinese supermarket!" OR "Oh no, Chinese Mafia!" OR even possibly, "Bum!"