I told Man Yung not to ask the lady on the opposite side of the table to dance.  "I'm not sure whether the guy sitting next to her is her partner," I said.  "If you ask her to dance, he's going to ask me to dance and I don't want to dance with him - but I'll have to because he is Osvaldo's 'friend'."

It was really crowded at Yira Yira and Man Yung was bored because none of the porteña milongueras he usually dances with were at the milonga.  "No, I'm sure it'll be fine - he won't ask you if you don't look at him," said Man Yung with his usual great judgment about these things.

Up he goes to ask her - and surprise, surprise, the guy I didn't want to dance with immediately stands up to ask me to dance despite the fact that I was looking everywhere else but in his direction.  I am not pleased but I get up anyway.

I should have turned him down.  Within half a second, a couple bumps into us.  Two seconds later, it's our turn to bump into someone.  Another half a second - I get kicked in the shins. 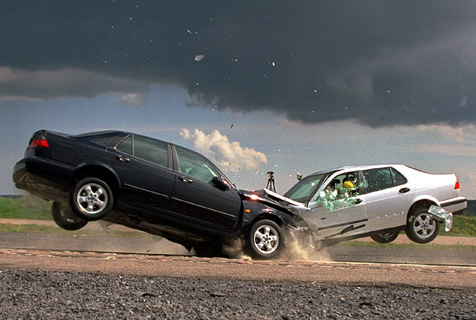 "Whoops-a-daisies! Whoops-a-daisies!"  The guy pretends to be sorry about the bumper-car ride, but I get this feeling that it happens to him and his partners all the time.  It's completely normal and he really isn't feeling too bad about it.  This goes on for three minutes, and at the grande finale we get SHOVED. Chan-Chan!

"Whoops, sorry about all that!  The people here are a little crazy!" he said cheerfully.  Since he is a 'funny' guy (yep, hilarious) he adds, "Should I go over there to the guy who just shoved us and tell him off?"

"Not only should you do that - you should go and kill him."

It takes a second for him to digest what I just said.  He smiled sheepishly. "Sure, alright, ok, let's go - I'm not much of a fighter though, but I'll do my best!"

"Don't worry about it. I'm a black belt.  I'll give you a hand if you have any problem kicking his ass."

I look at him straight in the eye.  "In that case, we definitely have to kill him - and then bury him once he is dead so that no one will find out."

Did he just turn a couple of shades whiter?  It was hard to tell in the dim lighting. But guess what - bumping during the last tango of the tanda was suddenly reduced by 85%!

Moral of the story:

1.  You have no business inviting a lady to dance on a dangerously crowded dance floor if you don't have the ability to protect her.

2.  If your lady partner gets hurt, don't offer to defend her honour if you don't mean it.  If you make such an offer, be prepared to follow through with it - that's what's expected of a gentleman.

3.  "But what if I'm not a gentleman?  I'm just a lizard/rat/single-celled microorganism" - Well, then, read the first sentence of #2 above again. And then read #1.

4.  Don't give yourself excuses that you can't avoid collisions because it's too crowded, you don't have enough skill, the people around you are crazy, etc. etc.  With a little bit of motivation and a little more care, you too can reduce your usual collision quotient by a whopping 85%!

5.  "Irene, haven't you learned your lesson?  It doesn't matter if they are Osvaldo's friend, Manolo's friend, Man Yung's friend, or even YOUR friend.  If you don't want to dance with them, you should just turn them ALL down if they don't use the cabeceo.  The world will be a happier place, with a lot less dead bodies!"

If gentlemen leaders would just take a little care, collisions will be reduced by 85%! Most collisions are caused by hot-shots who don't give a damn - about the safety of their own partners or the safety of the people around them. You can be a total beginner without much skill and still take care of your partner. Your partner can feel it if you care.

I noticed that at least in the Toronto tango community, the women who lead may not have a lot of skill at navigation, but they are much safer on the dance floor than men leaders who have been dancing for many years who are simply inconsiderate. So please - take care of your partner and the people around you!

Well, the collision happened because the particular woman leader/instructor in question (and her woman follower/instructor) were "hot-shots". And showing off. It's not necessarily a gender problem - it is a problem of being considerate, or not.

Such good advice! I recently got kicked, bumped and scratched with fingernails all in one tanda...