I wanted to post some great new videos of Osvaldo and Coca today - some that we took of them during our trip this year, and some of their recent performances in Uruguay, and with Sexteto Milonguero in Salon Canning....

"But you haven't even posted the video of us performing at Rivadavia Club last year!" said Man Yung.  "It has been over a year and still you have not gotten around to putting the video up on Youtube!"

Yes, I have been taking my sweet time posting this video... could it be, because it wasn't that interesting?  Why don't we ask Osvaldo and Coca for their opinion?

Late last year after we returned back to Toronto, we sent them a DVD with the video of our exhibition at Rivadavia Club.  A few weeks later, we called them from Toronto.  "Did you receive our DVD? What do you think of the video?" we asked Osvaldo.

And then I promptly forgot about the video, because we started talking about the best hand-made pasta noodles with tomato sauce in the world (which would be Coca's). 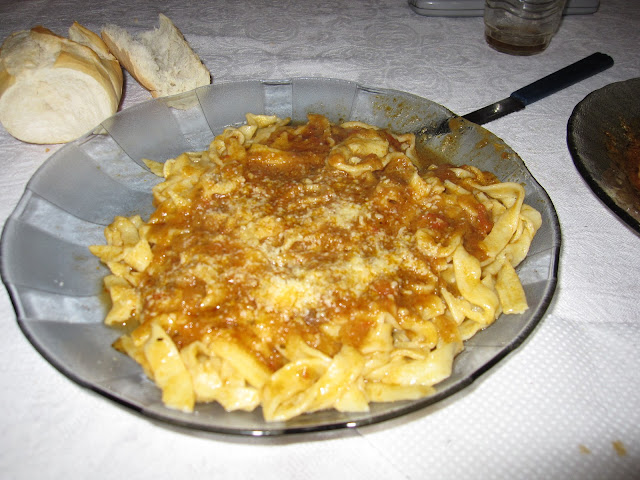 Coca's hand-made noodles with tomato sauce...Makes you forget about tango
(because all you can think of is devouring at least three plates - or more!)

Next time we saw Osvaldo and Coca in Buenos Aires, we suddenly remembered that we didn't get their opinion on the video when we called them on the phone.  So we asked them again.

"Yes, my dear, we saw the video," said Coca.  "Hey, this weekend when you come over to our place do you want to eat noodles with tomato sauce, or do you want to try my gnocchi?"

"I want noodles with tomato sauce!  At least three plates!" I replied, jumping up and down with greedy gluttony glee.

Hey, is it just me, or do we NOT have a promising career in Show Tango?  Especially with all the plates of pasta I've been packing away (Oooooooph!  Can't fit in my skintight red and black fringy sequiny see-thru Show Tango costume anymore!)

We're just kidding about Osvaldo and Coca's reaction to the video!  They actually didn't try to avoid the topic - but they didn't really have any opinion because they don't really like people performing "Show Tango" that much, it's not their cup of tea.  In fact, they always discouraging us from performing to Pugliese because they feel that Pugliese's music is a little too "Show Tango" for their tastes (and conversely just to annoy them we are always threatening to perform to Pugliese!)

As for the background story for this video (like, why on earth are we performing to D'Arienzo's "Este es El Rey"?) - It was the last night of our visit to Buenos Aires in October, 2011.  We had bumped into Clely Rugnone, the organizer of the Monday milonga at Rivadavia Club, like, three or four times during our trip - and she wanted us to come to visit her at her milonga.  We didn't think we were going to have time to make the trip, because we had to go to the airport at 4 a.m. on Tuesday morning - but then, last minute, we decided to go for a little while because we had finished packing early.

Clely was delighted that we had come (especially since we had a flight to catch in a couple of hours).  A couple of tandas into the milonga, she came over to talk to us.  "How about a performance?  What would you like to perform to?"

"Eeeeeerrrr....What would you like us to perform to?" we asked Clely.

So we go back and forth with this question for about two minutes.

"No, we'll dance to whatever you like!" we said, finally.  "We'll dance for you!  What is your favourite tango?"

And that's why we ended up dancing to "Este es El Rey".  In fact, Man Yung had no idea what it was going to be.  Clely introduced us and we scrambled out there onto the dance floor - and when the music started playing (DA-DA-DE-DA-DA-DE-DUM!), I think Man Yung was so shocked his hair stood on end.

As for the "guerilla-style" camera work - Osvaldo and Coca weren't there to film us so we just set up our camera on top of a tissue box.  However, the very kind lady from "Los Mejores" tango magazine sitting just two tables away decided to give us a hand and she grabbed our camera and dashed closer to film us, so that we wouldn't be the size of ants on the video. (See our post about our performance at La Nacional for more ant-like action from yours truly)

Although we would have liked to jump higher, spin faster, and yes, it would have been more exciting if we were shot out of a cannon while dancing to "Este es El Rey" - it is a "Show Tango", after all - I think it worked out, we didn't deviate too much from our usual style and none of our limbs came off with all that "Show Tango" exertion.  Our friend Roberto Segarra was at the milonga and came over to congratulate us after we performed.  "Goodness, I haven't seen you dance like that before!" he said, winking.

Thank you Clely for giving us this chance to perform at your milonga!  Un beso muy grande!