We were glad when the Toronto Star printed this story today:

This means that the international news community took notice of this event - it's no longer some insignificant localized issue.  Man Yung has been reading about this controversy in the past few weeks and hoping that there would be a big turn out at the protest on July 29.  The Hong Kong government had predicted "a few thousand" people would participate.  Man Yung guessed optimistically maybe around 20,000 (Hong Kongers are typically very reserved and practical-minded and not inclined to participate in any kind of political demonstration).  Despite what the article said (The Star got its information of "19,000" from the "official counts" of the biased HK government - they have been discounting the numbers of people protesting by about 80% since 1997 to make the numerous and growing protests look "not so serious") - the tally is around 90,000.

That's 90,000 really flaming angry parents and grandparents, protesting in blazing hot, humid conditions.  They had their kids - babies, toddlers, children, teens - in tow.  There were enough protesters to fill the largest sports stadium in Hong Kong three times over.   Many of these protesters were first time protesters, those who never participate in the any of the 6/4 memorial or 7/1 annual protests.  You know what?  The corrupt Communist regime had really pissed these people off with their planned "Brainwashing" Curriculum.

So what is the "Moral and National Education" curriculum about that has made people so angry?  It's about brainwashing people to be "good citizens" - defined as being brainwashed robots who will slavishly adore the Chinese Communist Party and to shut up and not speak out when their rights are trampled on.  Anyone read "Nineteen Eighty-Four"?  Thank you Orwell, for writing about totalitarianism and predicting the mind control and brainwashing tactics of totalitarian regimes like the one in China - because this is exactly what the "Moral and National Education" curriculum is about.

Heck, even the government admits it's brainwashing!  Several corrupt chinese officials came right out and said, "Yes, it's brainwashing - you hoity-toity Hong Kongers with all yer fancy-schnancy notions about rights and freedoms and democracy need to be brainwashed and be obedient!" These are the same corrupt chinese officials who have sent all their children overseas to be educated in the United Kingdom, U.S.A. or Canada - even they know something really stinks in the People's Republic of Corrupt Communist China.

They even have a name for all these corrupt chinese officials who have sent their entire families overseas once they have earned a whole bunch of $$$$ through corruption to fund this immigration - they are called "Naked Officials".  They are "Naked", because they have sent all their loved ones overseas, they are the only ones left "Naked" in China, still trying to embezzle and cheat and steal all that they can from the people under them.  The money they get from corruption, they'll send it overseas to be safeguarded by their family.  If they get caught (or rather, when they get purged for siding with the wrong political faction within the Communist Party - there's an endless internal struggle for power), they will face the music but their money and their family are safe.

Which brings us to the recent, massive and violent protest in Jiang Su.  The top corrupt chinese official there signed a deal with a foreign enterprise for a foreign factory to be built next to the main river.  The factory dumped tons of toxic waste into the water (it was cheaper to bribe the corrupt chinese officials to overlook the lack of environmental controls instead of installing them to minimize pollution), affecting the health and livelihood of the people in the region.  About 100,000 protesters stormed the government buildings, overturning police cars and dumping all the paperwork in the government offices into the street: 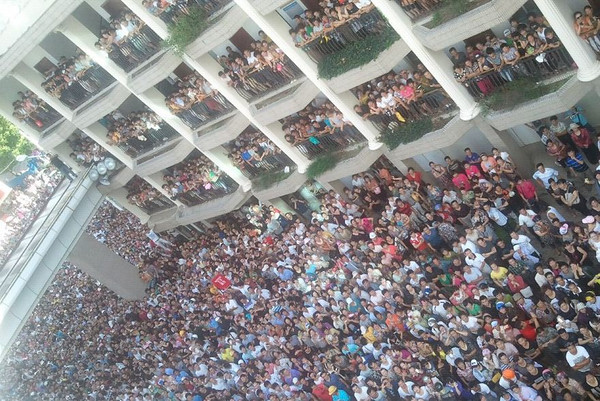 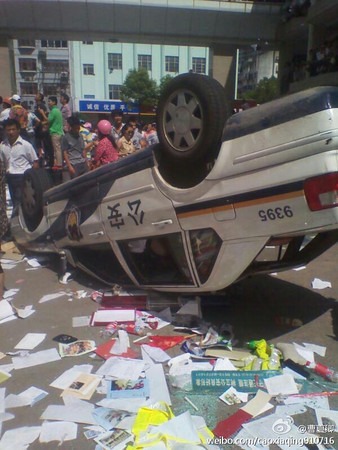 What's remarkable is not the police car tipping, or the paperwork dumping.  The remarkable thing was the "Corrupt Chinese Official Stripping".  The protesters managed to grab hold of the head honcho responsible and strip him naked: 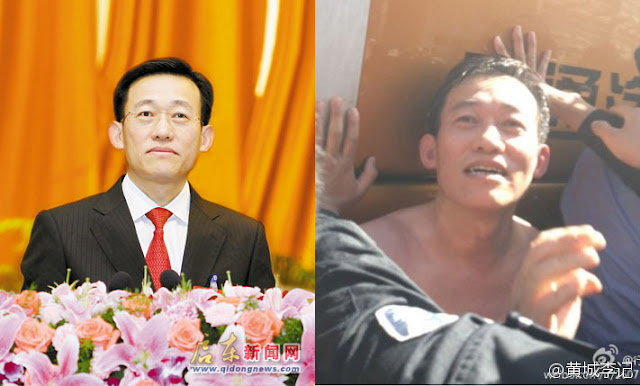 Corrupt Communist Chinese Official Before and After: The Makeover Edition

"I don't like this photo," I said to Man Yung.  "The guy should look terrified, or at least contrite.  Here, he looks almost happy."

Man Yung was sorry there wasn't a better, "Not so Happy" photo of the guy.

I added, "You know what, the protesters in Jiang Su are pretty peaceful - they didn't even beat up the guy.  But give it another six months - I bet that there'll be a even bigger protest somewhere else, and some Corrupt Chinese Official will not only be stripped naked, they will be lynched."

I think something is going to explode in China sometime soon, and when it does it's not going to be pretty.

1.  Maybe this is not a good time for Tango Teachers to go on a teaching tour of China, no matter how lucrative it may be (and don't forget, you will be eating lots of poisonous food while you are there);

2.  Brainwashing?  Ha!  In Tango we eat brainwashing for breakfast, lunch and dinner!  For example, you might have been led to believe the following:

a)  It's perfectly OK for a little (or a lot) of bumping on the dance floor.  Just pretend that you haven't been gouged in the shin by stiletto heel of someone's over-enthusiastic boleo - a little bleeding and bruising has never hurt anyone!

c)  Everyone loves "The Life of the Party" - what laughs, what fun!  Sure, you would never take her to meet your ma because she is way too loud and vulgar (and reminds you of "El Carnival de los Animales") but what a hoot!

d)  New Tango isn't Dead - no sirree!  It is being revitalized every day like the legendary Phoenix - by middle-aged men with flappy pants and untucked shirts hiding their protruding paunches who make eager newbies do endless leg wraps+voleo+boleo combos because heck, all that leg wrapping near their groin area is like, titillating and stuff.

your posts are always thought-provoking and frequently very funny. You had me laughing to this one and my cat who was washing herself next to the computer thought I was laughing at her!! Thank you for your thoughts - and for making me smile!!

Thank you for reading our blog! Our cats are also quite often unamused at what we say - you see, our cats all dance "Tango Salon Championship" style and they don't appreciate us making fun of it as often as we do ;-)