Remember Julio Cesar Cordi, the mysterious man in black we encountered at Glorias Argentinas back in March?  After dancing with me, he gave us his phone number and we called him during our October trip.  We had a DVD with a video that we took of him and some photos that we wanted to give him of that night in Glorias Argentinas.  He was surprised and happy to receive our call - and invited us to the Sunday milonga at Pinar de Rocha, where he was the DJ.

"But isn't Pinar de Rocha quite far?" I asked.

Yes, indeed it is far.  It is further than Mataderos, where Glorias Argentinas is located, as it is in Ramos Mejia (or Villa Sarmiento, if you ask Google Maps), in the Province of Buenos Aires:

Manolo came down with a cold the week before our visit.  While he was feeling well enough to have us over for lunch on Sunday (Where we had the chance to taste Martha's marvelous asado!  Manolo taught her his secret recipe.  When we asked Martha and Manolo how they made the meat so tender, they told us "The trick is to keep the heat low and to take a long time....so that the meat would be thoroughly cooked on the inside, but remain raw on the outside." ), he couldn't go with us to the milonga.  The plan was to call a remise to take us directly from Martha and Manolo's house to the milonga.

Unfortunately, as 9:00 p.m. rolled around, we couldn't get a remise.  Martha called several remise companies and either they were closed or had no cars available.  We called Julio Cesar Cordi, but he wasn't able to arrange any remise for us either. Meanwhile, Ruben and Elena had already left for the milonga, so we couldn't contact them to pick us up on the way.  It was very frustrating, the first time we had this kind of problem.

As a last resort, Manolo decided to drive us.  We didn't want him to, since he was still coughing and should continue to rest at home.  Luckily it wasn't too cold and it was only a ten minute drive - we finally arrived at the gaudy neon lighted entrance of Pinar de Rocha which faced the railroad tracks running right in the middle of Segunda Rivadavia.

Pinar de Rocha has a Sunday milonga but on the other nights it is a popular nightclub.  It even has an entry on the Argentinian wikipedia, which describes it as a famous discotheque that started up in the 60's.  It wasn't very busy the night we went: 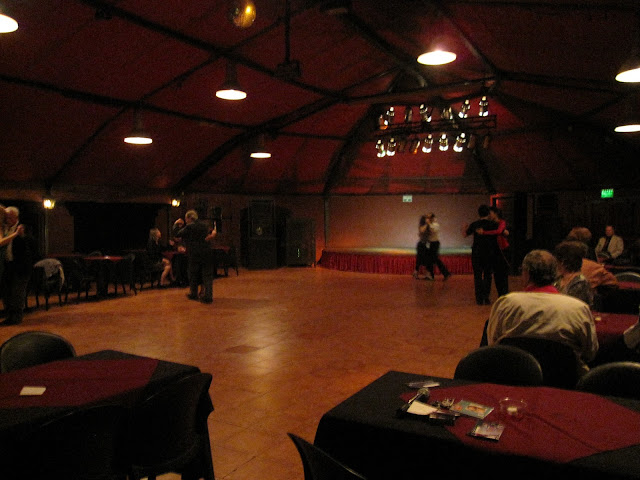 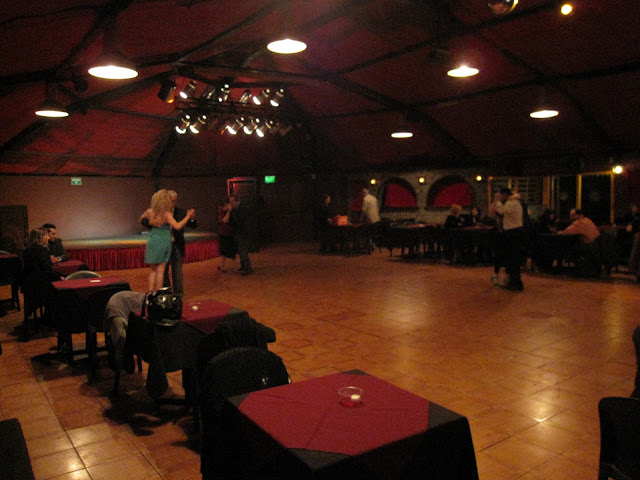 The Sunday milonga at Pinar de Rocha
The space itself was cosy, with low wooden vaulted ceilings which reminded us of a great hall right out of Beowulf - even though the tile floor was a tad hard and uneven. By midnight the tables were filled but it was not crowded.  As with most of the barrio milongas, couples and groups showed up to eat and spend time together, and dance a little - we didn't see any singles.

We were warmly welcomed by Julio - who looked very hip in his slim jeans.  Before the floor filled up, he danced a spectacular tanda of Troilo with a young female patron of the milonga.  As we didn't get his permission to film before he started dancing, we missed the opportunity to video Julio's dancing for you this time - and we didn't get another chance again as Julio was busy with arranging the music for the rest of the night.  Oh well.

Ruben and Elena were already there, smartly dressed as they had just attended a wedding in the afternoon.  Ruben had been to Pinar de Rocha only once before, but it was Elena's first time at the milonga even though they lived nearby.  We were really happy to see them.

Back last April, we posted videos of Ruben and Elena dancing their elegant, beautiful style of tango to the music of Calo at Lo de Celia.  In Pinar de Rocha, we seized the opportunity to film them dancing to a tanda of Biagi:

Ruben Dario Lopez and Elena dancing to Biagi at Pinar de Rocha, October 24, 2010
Biagi's music is not very complex, compared to, say, late Di Sarli or Pugliese, as it is characterized mostly by a driving rhythmic quality - but it's pretty funny to observe how dancers outside of Buenos Aires interpret his music.  Some dance it overly mushy, without backbone, with too many "dreamy pauses".  Where's the compas?  Then you have couples where the man shuffles along and the woman is overcompensating for her partner by adorning every beat.  Can you imagine how unbalanced that looks? Others (especially the "Nuevo Milonguero" crowd with the flappy pants and untucked shirts) stomp and jerk their way through it.  They don't look like they are dancing tango - they look like they are having fits.   Many a time we look out on the dance floor at a Toronto milonga when Biagi is playing and think - "Oh my God!  My kingdom for a couple who could dance to Biagi - or at the very least a horse so that we can ride right out of here instead of looking at this train wreck!"

That's why we love this example of Ruben and Elena dancing to Biagi so much.  Just look at Elena's delicate and natural footwork and Ruben and Elena's clean, smooth, musical technique. Did you notice?  They move calmly to the compas together.  That - and not stomping cockroaches - is how the milongueros in Buenos Aires get it right with Biagi.

We left Pinar de Rocha around midnight.  No, not even the organizer was able to arrange a remise for us to leave!  Luckily a remise happened to "drive by" when we were wondering what we were going to do at the front door, so Ruben and Elena didn't have to drive us all the way back into town that night.  We took a bit of a chance with the remise, as it was not with a remiseria affliated with the milonga - the driver didn't even know downtown that well and we had to actually give him directions on how to get to Santa Fe and Callao.  At least we arrived in one piece!

If you are feeling adventurous, you have your own dance partner - AND you have guaranteed transportation - you may consider paying Pinar de Rocha a visit. We had fun but only because we were in the company of friends who would make sure we got home safely. Otherwise, you might end up in peril of getting stranded!
Posted by Irene and Man Yung at 7:44 PM

totally relaxed elegance. very inspiring to watch.
When I grow up, I hope to be dancing like her.

I wish I could dance like Elena too! Her footwork is so refined.

P.S. Man Yung loves your wonderful pottery on your website! He used to sell Chinese antiques and arts and crafts in Hong Kong and he's got an eye for the beautiful - and your pottery is really lovely.