We posted this back a while ago - Susy Tilbe dancing with her partner in Milonguisimo, Juan Esquivel, at a homage to Carlos Di Sarli held at Maipu 444 by Nina Balbuena and Luis Cordoba on June 18, 2008:

Susy Tilbe and Juan Esquivel of Milonguisimo performing to Carlos Di Sarli's "El Ingeniero", Maipu 444, June 18, 2008
It's a video that we watch again and again... like all performances by the principal dancers of Milonguisimo, there's so much about elegance, musicality, feeling, and entrega that we can learn by watching this!

On the first night of our first visit to Buenos Aires back in 2008, we happened to catch a performance of Milonguisimo at Glorias Argentinas. How we applauded and cheered to watch our tango heroes dance! We got to know some of the wonderful dancers - and Susy, ever so kind and generous and welcoming to her fans, was the first ever milonguera whom Man Yung ever had a chance to dance with. An absolutely unforgettable experience - unfortunately one that Man Yung did not have the pleasure to experience again until this year.

There are some followers in tango that are so extraordinary, they are divine. The bailarinas of Milonguisimo are some of these mythical followers - Elba Biscay, Haydee Esther Malagrino, and of course, Susy.... What they have is not only the skill to follow beyond anything experienced or seen outside of Buenos Aires - what they have is that feeling, that feeling that is like none other. To be embraced by one of these goddesses is to be embraced by Tango. You forget who you are, where you are, what you are doing, who you are dancing with...there is nothing left but Tango...

"No, no! No marry!" Susy said to Man Yung, wagging her finger - her eyes dancing with laughter. Man Yung had just danced the night away with Susy, who graciously agreed to spend time with us at Lo de Celia during our recent October visit. After dancing about ten gazillon tandas with Susy, and of course being completely enraptured, the most natural thing for Man Yung is to propose marriage! Sorry Man Yung, you are stuck with me for now!

What is the secret to Susy's dancing and following that makes men prostrate themselves at her feet? Although Susy has tango skill aplenty, it's not just that - many followers have high levels of skill, but dancing with them is cold - frio. What is her secret?

Maybe there was a clue in something she said to me.

We were sitting at our table and talking about the milongas Susy likes to go to. She has a packed schedule every day of the week - she works full time and performs in Milonguisimo and other theatrical productions at night. Her days and nights are filled with work and rehearsals. She has to steal time to dance. "When work is done, and there's about two hours until the next engagement - off I run to El Arranque to dance, dance, dance all the tandas I could. Then it's off to the rehearsal! When I have a free night, I may go to ___________________ milonga, or to ______________ milonga. Do you know _______________ milonga? The place is nice, the music is so-so.... and the dancing is terrible!" Susy laughs. "But I have such a marvelous time!"

It's not always that she has the time to dance, but so long she is dancing, Susy will always be having a beautiful, wonderful, magical time. Her happiness in dancing tango is in her heart and soul, and anyone who dances with her can feel it too.

After the milonga, we left Bob and Viv, tango blog celebrities extrordinaire, with their deliriously enthusiastic Canadian blog fans [just kidding - a big tango blog hello to Jesse and Dorian from Vancouver] at the door at Lo de Celia - where they proceeded to wander aimlessly around the Entre Rios and Humberto Primo area - hee hee!* As for us, we had to take Susy home.

As we sped along the glittering Buenos Aires streets in the taxi, Susy had more advice for us. "In Tango, you have the man, and the woman. In the three minutes they are together, the woman must give her everything to the man. Her all. That is their agreement when they embrace. That is what makes the dance."

Susy Tilbe dancing with Man Yung at Lo de Celia, October 20, 2010 to a tanda of Pugliese

Susy Tilbe dancing with Man Yung at Lo de Celia, October 20, 2010 - a milonga!
Man Yung, we can take Susy home but you can't take Susy home with you! You will just have to make do with these lovely memories! And what wonderful times we had. Here's a photo of us, Susy and Roberto and Olga all together - at the always fabulous Lo de Celia. Another night to remember. 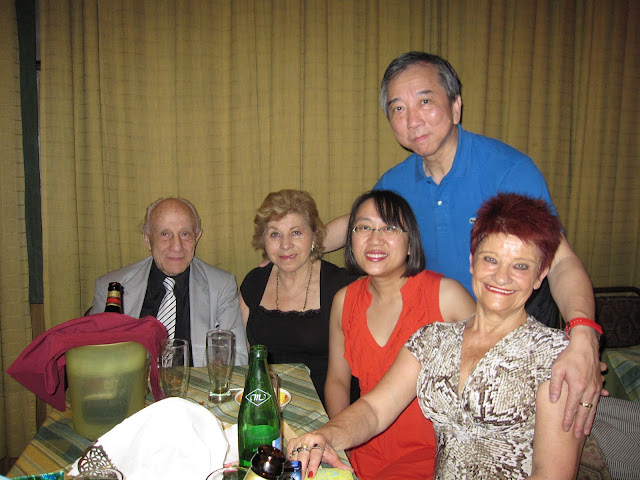 Hey! Where are los Galeses, weren't they were there in Lo de Celia as well?

The Galeses were indeed in full force at Lo de Celia... unfortunately they were too busy with their Canadian blog fans to ask us to dance!

The last we saw of the Galeses was at the door, where they were crowdsurfing over a sea of blog fans that had congregated into a impromptu tango mosh pit. What a sight!

(Ha ha! We did mention you, and even linked to your post about that night at Lo de Celia. Didn't you guys get lost at one point?)

Ah!yes, but we were not exactly lost, it was just that the fan club seemed to know where they were going.
We did dance together that night, Didn't we?
A culturally diverse group, I think you will find is the correct term, not a "mosh pit"
Still it was nice to be so faited, see you in May?

Big hello to you all from Vancouver. What a pleasure to have met you all at once at Lo de Celia. It felt surreal when I saw Man Yung dancing with Susy passing by my table. Dorian couldn't believe it at first. All in all, we were happy to see you in persons. You are dedicated tango bloggers who write with witty humour and insight. Irene..thank you for the lovely dance with Dorian. Bob/Viv...thanks for guiding the lost sheep back on track.

It was surreal for us too to actually find that we have fans! ;-)

We're just kidding. It was a pleasure to have met you - hope our tango paths will cross again soon someday,