In the "Casa de Irene y Man Yung", Man Yung is usually the know-it-all. That's the benefit of being ancient: you've had more time to sight-see.

But in some areas, I'M the EXPERT. Just look at this impressive résumé:

1982: English Schools Foundation Kennedy Road Junior School - "In Charge of" 200 word Project on "Ghosts". Illustrated (Drawings. In Crayon)
1989: "Worked with" Twenty-Four volumes of the "Encyclopedia of the Supernatural, Paranormal and the Unexplained" at the A.C.C.I. library (and made notes)
1990, July: "Frightened" by Ouija Board
1993-2002: "Participated in" (a.k.a. watched and had a major crush on Agent Mulder) Two Hundred and Two Hours of "The X-Files"
June, 1995: "Performed Exorcism" on my baby sister at The Peak in Hong Kong (the bumpy tram ride up the mountain "mysteriously" nauseated her. I "encouraged" her to puke)
2001: 150 hours "Immersive Experience in" "Silent Hill", "Resident Evil" and "Parasite Eve", and therefore: 2001 onwards: "Had" recurring nightmares for years afterwards about ZOMBIES

Have a question about the Supernatural, Paranormal and the Unexplained and don't know where to turn? Ask me! Ask me!

"Alright then," said Man Yung, "When someone dies and comes back as a ghost, do they keep on wearing the clothes they died with in the afterlife?"

"Of course not!" I replied. "Clothes don't have 'souls'. Especially if you buy them at H&M."

"So why don't you see more ghosts running around naked?"

"That's because that would make the ghosts frightening for all the wrong reasons."

"What do ghosts wear then?"

"Don't tell me you haven't been around long enough to see a few! Everyone knows that Chinese ghosts look like Ching Dynasty Manchu Officials:" 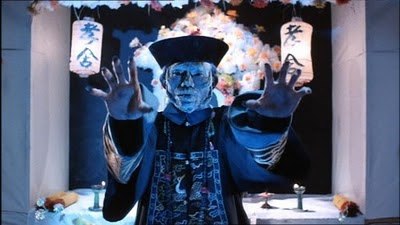 "What about people who weren't born in the Ching Dynasty?"

"The Manchu court official costume (underlit in 'spooky' blue or 'what happened to my complexion?' green) not only is standard issue, it was the latest update. Everyone gets to wear this, doesn't matter if someone was buried in an Armani suit or a thong. The long yellow post-it on the forehead with the chinese scribbles is optional. Unfortunately, no further upgrades are available at this time." 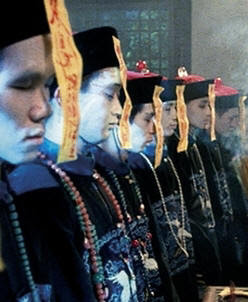 "Is this a unisex thing?"

"Don't be silly," I replied. "Chinese lady ghosts get to look like the Empress Dowager." 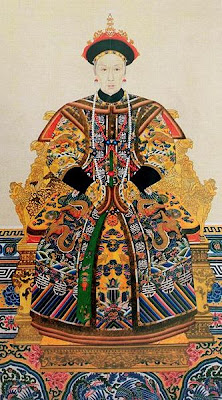 Man Yung nodded, as I was absolutely right - but remained skeptical of my expertise. "OK, smartypants. How about non-Chinese ghosts? Could you tell me something about those?" 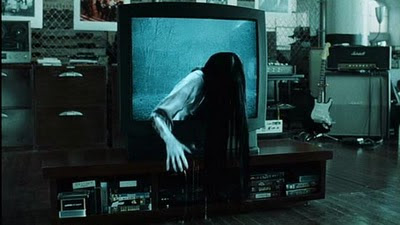 "Are you sure?" said Man Yung. "Shouldn't they look like samurais and geishas?"

"That's soooooo 1980. They got their update eons ago. Everyone knows that Japanese ghosts are technologically more advanced than Chinese ghosts - why else are they constantly spotted crawling out of tvs?"

"You've covered Chinese ghosts and Japanese ghosts - how about other ghosts?"

Still trying to stump me. When will he ever learn? "Man Yung - look no further. Here's a computer-generated chart I made just for you:" 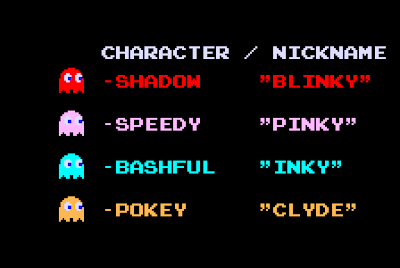 Man Yung was completely astounded. But he had one more lingering question.

"What about milongueros and milongueras? Don't tell me that they appear in the afterlife wearing coloured garbage bags with eyeholes?"

"We're talking 'ghosts' here and not heavenly spirits!" Ahhh, coup de grâce. "I've covered this before just last year - ALL milongueros and milongueras go to the 'The Big Milonga in the Sky.' They have a very strict dress code - don't think you could get in looking like a bum in a sheet!"

1. Résumé, Résumé, Résumé! (Remember to embellish. Or even lie!)
2. Blog! (Or put up a website! Or both!)
3. "Hint" heavily in non-subtle ways about how expert you are! And don't allow comments!
4. Substantiate what you say with Diagrams and Pie Charts!
5. Sound confident! Dismiss opposing opinions as "Bullshit!"
6. Assert the most preposterous theories! If your ideas are illogical and utterly absurd, you must be onto something there!

Try this at home: Coach people to dance, legs apart and butt out, like bow-legged waterfowl: 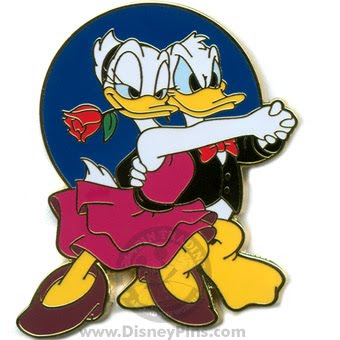 Remember: Hand out your Résumé! Be long-winded and assertive! Draw a chart! Notwithstanding that it's all "Bullshit", some suckers will still think you are an expert and end up dancing like a pair of ducks!
Posted by Irene and Man Yung at 12:01 PM