Anyone who hasn't been living under a rock these past few months would have heard about the massive Toyota Recalls. In fact, Akio Toyoda, grandson of the Toyota company founder and current CEO and President of Toyota Motor Corporation, gave a very public apology on February 5: 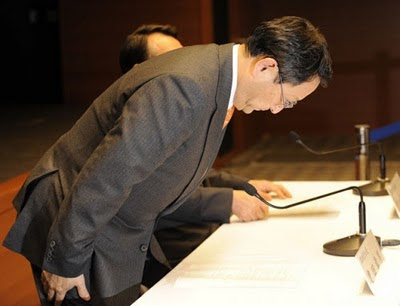 When Man Yung and I heard about the Toyota recalls, this is what immediately came to our minds:

1. Boy, aren't we glad we didn't buy a Toyota.
2. We hope that the Toyota chief and his Board of Directors will not commit seppuku.

From cradle to the grave, samurai honour and the glory of ritual disembowelment are deeply ingrained in Japanese culture. Look no further than the story of the 47 Ronin - they avenged their master's death but were still required to committed seppuku en masse. You can even find the spectre of seppuku in children's comics - Japanese manga like the immensely popular series Ranma 1/2:

You never know.... there is an odd chance that the Toyota apologies may be accompanied by a public spectacle of the age-old ritual of seppuku. We hope that it never comes to that - you don't want Toyota to set a public precedent for the consequences of corporate failure. Could you imagine the messy cleanup and biohazard (not to mention psychological trauma) that would result if all the key people in the finance sector responsible for the recent recession were to ritually disembowel themselves on tv?

Nevertheless, Man Yung thinks it is admirable that Akio Toyoda has publicly apologized for his company's mistakes - it shows sincerity and bodes well for the company's willingness to address it's failures. Likewise, though it is old news by now, Chicho Frumboli did good when he came out and admitted that heck, maybe Nuevo Tango was not a good idea for Tango.

Lucky for Chicho, ritual embowelment is not a cornerstone of Argentinian culture. No need to fear that Chicho and all his followers will be staging a huge seppuku event to the beat of the Gotan Project at the Luna Park stadium!

Unfortunately, I don't think Chicho has started a recall. In addition, although Toyota has figured a way to fix their recalled vehicles, there's been no word yet on how Chicho is going to fix all those faulty gears in the nuevo tangueros and tangueras that cause them to charge around the dance floor throwing colgadas and volcadas and linear boleos willy-nilly with absolutely no relation to the music.