Love your DJ if your DJ loves you 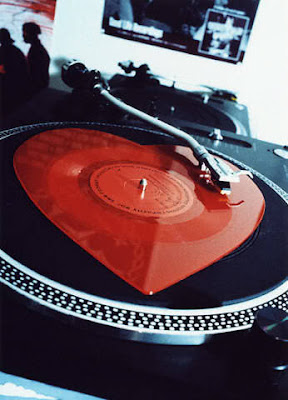 There once was a time when deejaying in Toronto milongas was pretty horrific.

I'm sure that every tango community has a similar learning curve. In the beginning, you have "DJs" who weren't really DJs in the strictest sense, but a person who helped organize the milonga and pressed a button on the stereo. They inevitably played whatever music they or a friend of theirs brought for them from Buenos Aires or from visiting instructors - sometimes in the form of tandas, sometimes not. The "DJ" played the same four, five or ten CDs (or audio cassettes, remember those?) with the same mix week after week after week.

Dancers would just be enchanted that there was music playing. "A milonga!" they would exclaim. It was such a novelty. But at that point tango dancing itself was probably also a novelty - indeed, were they even dancing "tango" at that point?

Eventually, organizers became slightly more clever and/or slightly more sophisticated about the music. They may have actually heard DJs play music at milongas in Buenos Aires, or heard stories from travelers who traveled there. These intrepid pioneers put something together from scratch to try and approximate what they believed to be "appropriate" or "authentic" music for a milonga.

The "Tango DJ" was born - albeit in single-cell, embryonic form. They put their own personal stamp on the music, with mixed results. Some refused to play music with "singing". Some refused to play anything but De Angelis. Some played the same two painstakingly crafted playlists every week. Some dug deep into their psyche (and massive non-tango record collection) and played "innovative" music that was not only undanceable, it sounded like someone strung a whole series of cortinas together.

It started to become trendy for Toronto milongas to announce the "DJ" who was playing that night in their flyers and emails, the intention being that the "DJ" would be the selling point for the dancers.

Of course, in "El mondo de Irene y Man Yung", it never really worked out that way. We would read the flyer or the email, take one look at each other, and say: "Mr./Ms. So-and-so is deejaying tonight at _____________? He/she plays awful music! I think we would be more entertained if we stay home to clean the bathroom/make a casserole/watch paint dry!"

So there you have it - there was a time when tango deejaying in Toronto was either indifferent or repulsive. We would never just "go" to a milonga just because the organizers sprouted some hype about such-and-such deejay. Until recently.

There's a time-honoured porteno piece of advice about tango deejaying involving observing the dance floor to find out what music you should put in the playlist - however, I don't think Toronto tango has progressed to a point where this can be considered a golden rule. How is a DJ going to get good feedback if the dancing on the pista is uneven or crappy and most of the dancers are just indiscriminately flapping their limbs to "noise"?

Just as the dancing has evolved here in Toronto, the deejaying as evolved as well. More and more, Toronto dancers are making the effort to dance well and to travel to Buenos Aires to learn from traditional teachers, dance in traditional milongas and to absorb traditional tango culture. It has resulted in better dancing - and better music in the Toronto milongas.

The best DJs in Toronto try to understand what is good dancing - which involves him or her seeking to become a good dancer himself/herself. A "good dancer" in this context, does not mean merely excellent technique (although technique is related to proficiency - a dancer with bad technique can only go so far) but something more.

I'll call it "dancing from your heart". The DJ has to recognize what is it about the music that thrills and inspires the dancer - and feel it their own feet and in their own heart. They have to understand the sublime feeling that a particular piece of music gives that makes every dancer want to leap to their feet and not stop dancing until very last note. And with this understanding must come generosity - the DJ must honestly, truly desire to give this gift to everyone in the milonga, regardless of what he or she thinks of their level of dancing, their personalities, and whether they are friend or foe. The DJ must LOVE.

There's a set of rules about playlist construction that a DJ can learn (no-one has got it exactly right yet, but they are trying) but it's never just about cold, hard, sterile music manipulation. In addition, good networking skills, clever PhD-worthy theories about music, business acumen, talent at self-promotion and at winning popularity contests do not love make.

Love your DJ if your DJ loves you. When the DJ loves and understands the music from the depths of his/her heart to the bottom of his/her feet (and knows the difference between "love" and "narcissism") and loves his dancers, the result is pure tango heaven.
Posted by Irene and Man Yung at 12:35 PM