As a tie-in to our next post "Buenos Aires 2008" post, here's our report on the CaMiCando festival originally posted on another tango website in 2008. This gives you a little bit of background on the festival so we don't have to repeat ourselves again! 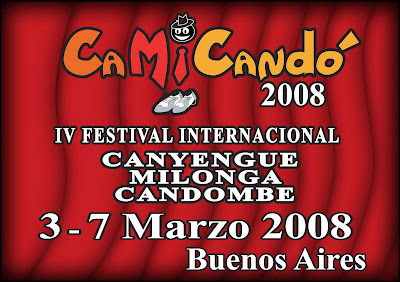 The word “CaMiCando” incorporates Canyengue, Milonga and Candombe; the CaMiCando festival held in the first week of March every year in Buenos Aires accordingly brings together dancers from all the corners of the globe for week-long intensive workshops in these forms of dances.

This year, participants of CaMiCando came from a wide range of countries such as the U.S.A., Canada, Brazil, Chile, Columbia, Japan, Poland, Spain, France, Italy, Germany, Belgium, and Argentina itself. As Adrian, Roxina and Jorgo of the MoCCA association (Movimientos Cultural Canyengue Argentino) the organizing association of the festival, comment, “We have participants who participate every year, which gives the festival an aspect of a family reunion. The festival is purist – we focus on the roots styles of tango (Canyengue, Milonga, Candombe) and their contemporary expression. We think that the participants appreciate this opportunity to experience the source of tango, in other words to connect themselves with the roots styles which are the source for all variations and future developments of tango.”

The staff teachers of CaMiCando 2008 included Martha Anton and Manolo “El Gallego” Salvador, the world-renowned experts in Milonga and Canyengue; Roxina and Adrian, Martha and Manolo’s direct students and specialists in both Classic and Contemporary Canyengue; Osvaldo and Coca, the 2004 World Salon Tango Champions; Gabriela Elias and Eduardo Perez, famous for their classes in milonga traspie at the Escuela Argentina de Tango and organizers of the popular milonga La Baldosa on Friday nights in Buenos Aires; and last but not least, Yuyu Herrera, Candombe expert and featured dance teacher in the Frommer’s Travel Guide to Buenos Aires. All teachers were hand-picked by MoCCA for the festival. As Martha Anton states, “they represent all the expectations set by the goals of having the festival – which is to reunite the three fundamental dances in a way that hasn’t been done before for distribution to dancers so that one does not lose all the music and dance styles of the old days.”

The classes are always held in a central location in Buenos Aires - this year, the grand hall of La Nacional. Apart from the intensive workshops, participants also enjoyed exclusive presentations of rare, old, never-seen-before private video and film footage of dance exhibitions by dancers such as Miguel and Nelly Balmaceda, Petaca, Pepito Avellaneda, Tito Pajaro, and even movie star Robert Duvall! In addition, the CaMiCando festival package includes two special milongas at two major Buenos Aires venues with music by live orchestras. In 2007, the festival milongas were held in La Nacional and La Confiteria Ideal; this year, the festival milongas were held in Dandi and La Baldosa. All milongas included spectacular performances by the festival teachers; alumni of the festival even had a chance to perform at the closing night milonga.

More is in store for CaMiCando 2009, which will be held March 2nd to 6th, 2009. When asked about their plans for CaMiCando 2009, Roxina, Adrian and Jorgo advised, “CaMiCando will celebrate its 5th Anniversary! Martha and Manolo will spearhead an exclusive festival and offer a week’s program of specialised workshops, canyengue master classes (new in 2009), performances and milongas with live orchestras, as well as screenings of films showing the milongueros of the classic era. The classes will take place in a classic milonga salon (within wooden floor and air conditioning) in central Buenos Aires.”

We have traveled to Buenos Aires for two years in a row now especially to attend the CaMiCando festival. We have wonderful experiences every year – both in terms of what we were able to learn from the workshops, as well as the friendships we were able to cultivate with the teachers and the other participants of the festival.

We asked Roxina, Adrian and Jorgo about what is their greatest satisfaction in organizing a festival such a CaMiCando, and they replied, “It is […] great to experience how the love for Canyengue and roots tango connects people from all over the world, who don’t know each other’s languages but understand each other and have fun dancing together.”

Inquiries about the festival can be directed to moccayengue@yahoo.com.ar. More detailed information will be available in July 2008 on www.camicando.org.
Posted by Irene and Man Yung at 3:00 PM

Email ThisBlogThis!Share to TwitterShare to FacebookShare to Pinterest
Labels: Camicando, Martha and Manolo