Our cat Mr. B disappeared for a full fifteen minutes this morning. Perhaps he was chagrined by the presence of noisy contractors who came inside our unit to change the fan coil filter. In any case, Mr. B responded to neither calls from Man Yung, the rattling of the kibble bag, nor even his favourite catnip treat.

When Mr. B did not appear when the catnip was produced, Man Yung became frantic. He ran to look for him in the outside hallway, and up and down the fire stairwell. He even asked the fan coil people whether they had seen Mr. B. No luck.

Man Yung almost had a heart attack there and then thinking that Mr. B had gone down to a different floor on the elevator or perhaps he had snuck into another unit to be turned into someone's "Dragon/Tiger/Phoenix soup" dinner (the "Tiger" in this famous chinese dish is actually CAT).

Well, after fifteen minutes, Mr. B finally appeared - not in the least bit troubled by the fuss that his disappearance had caused.

I myself have been in a state of disappearance for the past week. It started when I received a package from Jan in Cornwall, U.K. last Monday containing 1500g of Frangipani guernsey yarn in "Herring Girl Pink". Not even the GPS sale at Wal-Mart, the new Harry Potter movie nor promise of an extravagant eight course "Thank-you" dinner by visiting relatives from Winnipeg could entice me to emerge.

When I finally reappeared this morning, all I had to show for my disappearance was this: 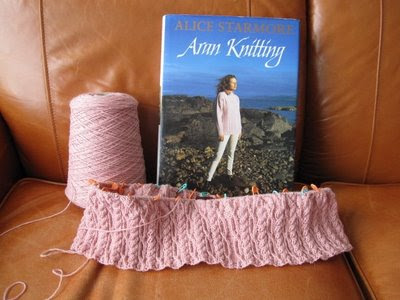 A slightly used cone of yarn, pretty sore hands and 10 cm worth of sweater (Alice Starmore's "Fulmar" from her book "Aran Knitting") knit in the round.

Make no mistake - the sweater is not for me, it's for Man Yung. Yes, it's pink, and yes, Man Yung chose the colour. Because real men are not afraid of wearing cotton-candy, "Herring Girl Pink".

I thought I was dancing with Man Yung on Saturday night during our practica. In fact, he had disappeared.

The key to make Man Yung dance without him thinking about steps or whether I should be knee-lifting, mule-kicking or foot flicking a little bit more to emulate the newest Geraldine embellishment is to make the music so good he can't think about anything else but dancing to the music. So I compiled an hour of Man Yung's favourite music, ever. A tanda of Di Sarli with Jorge Duran, followed by D'Agostino with Vargas, then a tanda of vals habitually performed to by Osvaldo and Coca and Alberto and Paulina etc. etc.

I even snuck in some not so traditional stuff that he always wants me to include "for fun!!" but I have been quite resistant to (too weird for me, thanks!) - like a tanda of FOUR DIFFERENT VERSIONS OF THE SAME TANGO and even a tanda of.... GARDEL.

Did Man Yung make any comment about the scrumptiousness of my music selection? Did he even raise an eyebrow when the third or fourth version of "El Adios" started playing? Did his dangerous attempt at dancing to the music of Carlos Gardel drive him insane?

Not at all! Apparently, as they say, "The lights were on but no-one was home." Man Yung was somewhere in the outer reaches of the cosmos at one with The Great Spirit of Tango from the moment he heard the opening notes of "Muriendome de Amor".

Good thing that we videotaped the whole hour. Because when Man Yung reappeared, I showed him the video and had the pleasure of hearing remarks from him like, "What? We were dancing to Di Sarli's 'Whisky'?", "I didn't know that you put in FOUR different versions of 'El Adios'!" and "You played a whole tanda of GARDEL!!!???!!?"
Posted by Irene and Man Yung at 8:40 PM