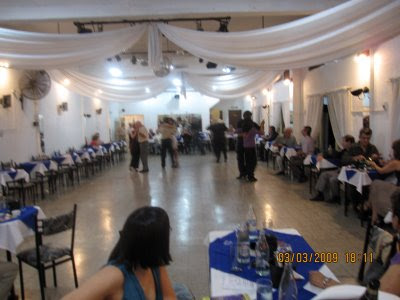 Saraza
Yes, we are finally back in Toronto after our third trip to Buenos Aires. And no, despite any fears other people may have after reading on other blogs about "travel experiences in Buenos Aires" - we were not robbed (or targets of attempted robbing), nor were we ripped off in any way, and we've always had excellent experiences with waiters and waitresses, taxi drivers, hotel staff, store personnel, etc. etc. Neither were we close to either being run over in the street or in a car accident despite all the seemingly "crazy traffic" - drivers in Buenos Aires must be the most skilled drivers in the road, they can maneuver in what would be regarded as "impossible" situations here in Toronto!

In all, apart from even more friendly people (and I suspect that's because my Spanish has improved) and a slight increase in prices, Buenos Aires has been exactly the same beautiful place on our third trip as it has been on our first and second trips.

Buenos Aires is exactly like any large city in the world - you need to have your common sense to stay safe in any city. Of course you have to be continuously alert and be careful when you are crossing the street, but the city is not dangerous so long you stay out of obviously dangerous places and you keep an eye on your personal belongings at all times. In fact, Man Yung says he feels safer walking around in most downtown places in Buenos Aires at night than he does walking around downtown Toronto at night. There's poverty in Buenos Aires and lots of people rummaging through garbage for recyclables, but there's poverty in Toronto too. However, unlike Buenos Aires, here in Toronto you never know when people will start pulling out guns and shooting willy-nilly in a street filled with innocent bystanders.

Still, we would rather live in Toronto than anywhere in the world - this is where we've made our home. The only thing we have to say that we really don't like and would not miss about Toronto is... Toronto Tango.

What the difference is for us is that in Buenos Aires, even a lot of the bad dancers are dancing. The leaders may be doing only one figure, or two figures the whole night, and they may not be able to lead anyone else but their regular partners, or perhaps they are dancing nothing but verduras (vegetables) or even kicking their partner's feet and knocking into their partner's knees - but at least they are dancing.

Here in Toronto, most of the people on the dance floor are performing, not dancing. Instead of enjoying the experience of dancing with their partner, their eyes roam the edges of the dance floor, scanning for information on who's looking at them, who they want to be looking at them, and then turning inwards to their overriding concern - what they want to look like to attract the most attention. They are tied up in knots about how cool they should be looking, doing all the steps that they have paid good money for and should therefore regurgitate, and what "style" they should be conforming to to be "authentic". And what for? For recognition, for self-esteem, to impress potential customers/students/tango associates - for a piece of that truly tasteless and minuscule pie called "Toronto Tango"? So-called "dancers", teachers, DJs or would-be DJs, organizers, "tango professionals" etc. all fighting tooth and nail over that same tiny piece of nothing.

I always joke with my tango friends about about having these really short lists of leaders I want to dance with in Toronto. Last time I checked I was down to three, and I wasn't really happy with that. I've decided enough is enough. I refuse to be involved in a tango that has nothing to do with "dancing". Let me take this opportunity to just send this short message out to Toronto Tango - if you are not Man Yung, please just don't bother about asking me to dance. Don't waste your time, because I will say no. The dances I get seem to be all about leaders checking how well they are "dancing" after they've been to Buenos Aires/Taken hours of private classes/Taken hours of private classes in Buenos Aires, or leaders checking how well I'm dancing (especially since I have just returned to Buenos Aires). I may be dancing well, or mediocre, or maybe my dancing is the worst thing in the world of dance since the "Chicken Dance" was invented, but it is none of anybody's business.

Every time we are in Buenos Aires so much happen it takes forever to get the reports ready for the blog. This time we had about two free waking hours between the time we woke up on our first day in Buenos Aires and our meeting with Alberto Dassieu at his house at noon - and we've not had a single free afternoon, evening, or night since (mornings we are passed out in the hotel so there's really nothing we can say about that). We have been rushing about town seeing people, attending the festival Camicando, being sick (I even went to Hospital Aleman's emergency room) - and writing all of this down. I'm still working on getting Buenos Aires 2008 in shape - hopefully by the end of April I'll have something up, followed by Buenos Aires 2009.

So for now, it's just a promise I will get the reports ready... soon. One last thing before I go - as many may have realized, I have this big "thing" about "standardized Villa Urquiza/Campeonato/Tango Salon style" and I rant a lot about it. Well, from what I've seen in Buenos Aires this year, it is starting to be "out" in all senses of the word. Sure, people are still teaching it and people are taking the classes, but as a style to be danced in the milongas - no way. It is contrary to navigational principles in a crowded Buenos Aires milonga to adhere to the "12-point Tango Salon competition" requirements of straight back, protruding butt, "long elegant walks", "fancy giros" and the like - you just can't do it. Of all the places we went, we saw only one young couple doing this at Sin Rumbo, and another couple at Viejo Correo, and perhaps Dante Sanchez and his partner at La Baldosa - and that was it, and we were out at a milonga every night. The truth of the matter is that if you are going to dance like this in a crowded milonga, you are in other people's way and you will be shoved. The locals were practically laughing at the serious and sour "Standardized Villa Urquiza - don't disturb me I'm channeling the spirit of Tango Salon!" faces of the two dancers at Sin Rumbo. All this elegant posturing may catch people's attention for a while, but once it becomes more about conforming to a style than really dancing and expressing the music (in this case, in the context of a crowded Buenos Aires milonga) - people lose interest very quickly.

So, tango evolves. Here's to another year of tango in Toronto - hopefully with more dancing and less "performing", more good music and less people claiming to be "the best DJs in Toronto" (whatever that means in this little pond of mediocrity), better navigation and more courtesy on the dance floor. And as always, more tangos with Man Yung (and more with Irene) -
Posted by Irene and Man Yung at 3:00 PM