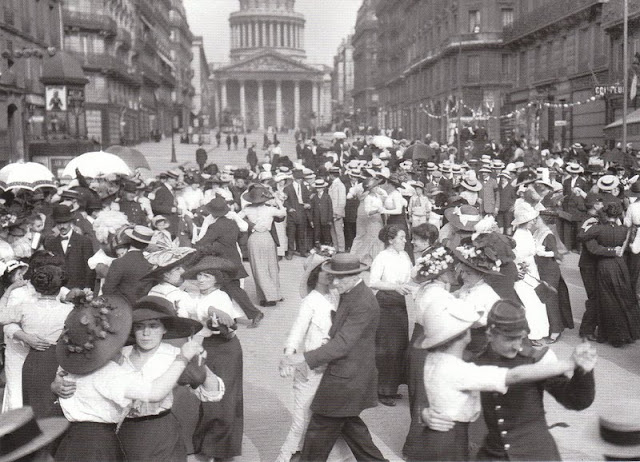 Recently, a beginner woman leader asked me for advice on how to improve her leading. She had been taking a lot of classes but was still too nervous/scared about her abilities to lead in a milonga.

I told her that there aren't any secrets.

"To begin with, you don't need a lot of steps.  If you can lead a salida, walk forward, turn left and turn right, and do an ocho cortado, you are already well equipped, stepwise, for any social dancing situation. After that, all you need to do is practice and gain experience by leading more in the milonga."

"But what if it is crowded?"  she asked.  "It is terrifying trying to lead when there are so many couples spinning around you.  I don't want to bump into anybody!"

I think that a lot of women are deterred from improving their leading precisely due to this kind of fear.  "The only way to get better at navigation in a crowded setting is to DANCE MORE IN A CROWDED SETTING," I said.  "Just leap into the thick of things until you get used to it and you overcome your fear.  You will bump a bit initially but it will get better as you get more confident and experienced.  Remember that all men leaders - including your favourites - had to go through the same thing and bump like crazy when they started.

"I benefited a lot from leading at the busiest local milongas, and then deliberately going to tango festivals where there are crowds AND the craziest whirling flinging dancers trying to show off all around you.  If you can survive that, you can pretty much survive anything."

"In any case, men leaders are generally courteous to women leaders - they usually try not to bump into a woman leading if they can help it," I added.  "Men learning to lead have a harder time.  I think men leaders are more aggressive to other men leaders and they will bully each other on the dance floor and get all pugilistic due to excess testosterone. ONLY ONCE did I encounter a man leader who deliberately knocked into me when I was leading.  Several times in one tango!  I told him off at the end of the tanda while he sprouted inane and irrational justifications on why he was entitled to dance like an asshole rather than a gentleman. I was rolling my eyes in disbelief.  He must have had a fight with his girlfriend before the milonga, poor sad baby."

She laughed.  "That's all great advice and I'm going to try leading when it is crowded. However, I still don't think I'm ready.  I think I would like to practice more on my steps in class and in practices.  I don't want to look stupid in the milonga - what if my favourite leaders are watching?  They won't want to dance with me anymore looking like an idiot when I lead!"

"I haven't had any leader stop wanting to dance with me because I was leading," I said. "And people aren't really looking at you - they are more concerned about the way they are dancing or who to cabeceo to care about looking at how you are leading.  And what's more - I can guarantee to you - despite how awkward you feel, you won't look stupid leading because you are already FIVE TIMES better as a dancer than _________________, the biggest hotshot in the milonga."

"Yes, he dances faster and bigger than anybody else but he is also reckless and unmusical.  Most beginner women leaders are already better tango dancers than the local hotshot because they care about their partners, the music, the feel of their tango and the safety of the people around them.  This means that they will work on and improve their embrace, their musicality, and their walk and their navigation.  _______________ may be able to do more steps but all he cares about is showing those steps off and  fantasizing about becoming a star tango professional.  Instead of embracing his partners, he contorts them and pushes them out so he can have more space for fancy footwork.  Instead of dancing to the music, he sacrifices the compas so he can squeeze in more steps.  And instead of respecting other couples on the dance floor and making sure that the milonga is a safe place, he zips around like he is a formula one driver on a racetrack and leads his partners into dangerous high boleos wily nily.  You can ask anybody in the milonga for their opinion.  Who looks more stupid?"*


* This doesn't mean all women leaders are good though.  I've seen women leaders who dance just as dangerously as the hotshot - and sometimes worse because they don't have sufficient experience with navigation.  They end up whirling really fast in the middle of the dance floor and people have give them a wide berth.  Once anybody - male or female - stops caring about dance floor safety because they want to show off, they become horrible dancers.

We are generally more attuned to our partner and surroundings and, of course, we have been on the "other side" for many years... and most of us women believe in connection, not steps. The future in tango lies more and more with women and it'll different because of that: we are done with waiting and suffering through inexpressive or crazy tandas! The only problem? Women leaders are not... men. Nothing can replace *that* feeling ;)