All the meat on the fire

I asked an Argentinian how this works.  How can every Argentinian's secret asado recipe be better than the recipes of all the other Argentinians?  Surely this is logically impossible.

He was not even ruffled by the question.  "It is perfectly logical.  Every asado prepared by an Argentinian at any given moment is the BEST ASADO THERE EVER WAS."

"What if there are two, or a hundred, or a hundred thousand asados being made at the same time? Surely they can't be all the BEST."

"Ah, but we live in a world where time moves forward.  Things happen consequentially, and not exactly contemporaneously.  The asado that comes a split second later is again the BEST ASADO THERE EVER WAS, and so on, and so on."

Ha ha.  But can Argentinians make a Chinese BBQ Squid?

He was rightfully stumped. 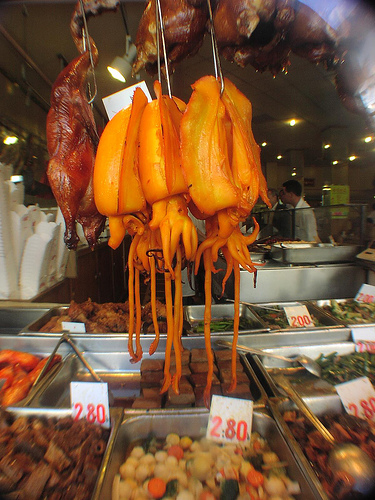 Actually BBQ Squid isn't really roasted, it is a marinated/stewed delicacy often found in Chinese BBQ restaurants/stalls.  That orange colour isn't from roasting, it is from tanning lotion.  But the Argentinians don't know that!  Shhhhhhh.....

This is a little known fact, but apparently every Argentinian's Tango is also the BEST TANGO EVER.

Okay, I made that up.  But Argentinians who dance Tango do know a couple of things about how to dance it better than anybody else and in fact, they treat it like their asado.

"All the meat on the fire!"  Don't hold back, just throw all those cuts of prime Argentinian beef, intestines, kidneys, sweetbreads etc. on the parilla.  They will all come out well done but the Argentinians like their meat thoroughly cooked anyway.  Rick McGarrey has already talked about it here.  While no Argentinian has actually said this to us in real life it is actually a very good Asado to Tango analogy.  Think this way and you are on your way to reach a mental and spiritual state to dance Tango well.

"Hey Man Yung, do you think we can do a Chinese BBQ to Tango equivalent?  Like, all the Crispy BBQ Roast Pork in the....oven?"

Man Yung thought for a while.  "Not really.  Chinese Crispy BBQ Roast Pork, BBQ Roast Pork, BBQ Ribs, BBQ Duck, BBQ liver and hearts and BBQ sausage all have different cooking times and preparation methods.  Besides you know that your beloved BBQ Squid isn't even roasted, throw that on the fire and it will come out like a piece of charred leather.  BBQ Squid isn't really BBQ, it's been lovingly soaked in tanning lotion for it's sunny golden/orange glow....And don't even get me started on the marinated duck wings, duck heads, tofu, kidneys and seasoned jellyfish.  You can get all of these at the Chinese BBQ store but they aren't roasted AT ALL."

I made a face.  "DUCK HEADS."  Gross little fellas, consisting of soy sauce halved duck heads with the bills attached.  Man Yung likes them with beer.

This is why I will never dance Tango as well as an Argentinian.  You can throw all your duck heads into the soy sauce, but would you want to eat them afterwards?* ** ***

1. * A local (Non-Argentinian, but excellent and exceeding popular, not always available for cabeceo due to being busy with hanging out with supermodels) dancer recently described to me the same concept.  "The old guys always told me, 'All the meat on the fire!'  That's how you can dance the best Tango."

I saw this as a splendid opportunity to fish for a compliment.  "You're right!  Now, in your opinion, who in Toronto dances with all their meat on the fire?"

He rubbed his chin pensively for a few seconds.  "Nobody really."


2. ** Man Yung said, "Irene, I know you have a thing for avoiding soy sauce duck heads but that's not the whole extent of your problems with dancing Tango well."

"What do you mean?  There's something else?"

I vaguely remember spitting out my mom's cooking and trying to hide it behind my rice bowl at precisely the angle opposite from where she was sitting so she couldn't see what's going on.


3. *** Man Yung wanted to add another nail to my coffin of being able to dance Tango well.   "Well Irene, what do you think of our cats?  Do you think they the most beautiful cats in the world?"

I look at him suspiciously.  "Come on!  What are you getting at with this?"

I looked at our cats.   A bunch of old grumpy lumps.  They are cute and everything but realistically, they are not THE MOST BEAUTIFUL CATS IN THE WORLD.

"They're ok but I'm not going to say they are the most beautiful cats in the world."

Man Yung shook his head.  "Too objective, Irene.  I have the most beautiful cats in the world, I dance the most wonderful Tango steps and I communicate the best Tango musicality and feeling in the ENTIRE UNIVERSE.  And my tango partner wife is the BEST TANGO PARTNER WIFE in history.  Can you think that?"

"Like, no.  Not unless I was like INSANE."  And whose freaking 'tango partner wife' was he talking about?  Must be some OTHER LADY judging from all his bloody whining and complaining about my dancing and housekeeping skills!   "And don't forget, I have stubby bendy legs."


As you can see, Irene may not be doing too well with Tango, but she knows a heck of a lot way too much about Chinese BBQ!  You can read all about it here and here.