The Evil Eye (The Chinese Way)

Breaking News: Neither myself nor any of the other dancers at the popular Sunday milonga needed to use the "Evil Eye" against anyone last night!  Everyone danced in a heavenly, orderly, considerate manner  - even the former "worse offenders" (well, more or less) of Toronto Tango!

How much more enjoyable it was to dance without having to dodge out of the unpredictable path of charging maniacs, avoid collisions and/or get crashed into!  People could enjoy the music more - and even dance better.  I've already written about the wonderful Toronto Tangueras/Milongueras (the ladies in Toronto dance really really well) did you know that more and more Toronto Tangueros are dancing with the musicality and feeling of Milongueros?  In fact, we complimented two gentlemen last night on their very milonguero dancing.  Without having to worry about dancefloor sabotage/el mundo de Tango Roller Derby, we can get down to some real Tango!

Here's a thought too for the reformed/partially reformed Crazy Leaders:  Isn't it loads better to behave on the dance floor and not have to stop and say sorry to all the people you have bumped into every thirty seconds?  Don't you find that people are friendlier now that you aren't assaulting them with your "Tango"?  And that Toronto Tangueras enjoy dancing with you more and are less likely to say no when you ask them to dance?

"Oh, but I had to give up my unbridled freedom of expression" you cry - but I think secretly you know that Irene and Man Yung are right and that being more considerate of others on the dance floor has made you a better and more respected dancer.  Fair enough trade off, I say - and you don't have to have withstand the "Evil Eye" no more!

Which brings us back to the whole issue of the "Evil Eye".  I know you are begging to know: What is it, and how and when can I use it in a Tango setting?

"Irene, didn't you know you have been kidding yourself all along - and that the Evil Eye doesn't work when you try to use it?"  said Man Yung.

"It's because you are Chinese and the Evil Eye has nothing to do with Chinese culture.  Check out the Wikipedia section on the Evil Eye - it specifically states that 'The concept of cursing by staring or gazing is largely absent in East Asian and Southeast Asian societies'."

And I thought that my evil staring worked wonders in repelling Tango Tailgaters.   "So what can me, as a Chinese person, do instead if I really, really want to curse someone?"

"Every self-respecting Chinese Hong Kong person knows that you've got to beat a man-shaped piece of paper senseless with the sole of your flip-flops!"

In Cantonese, we call this "Da Siu Yan (打小人)", roughly translated as "Hit the Little Man" or, as Wikipedia says, "Villain Hitting": 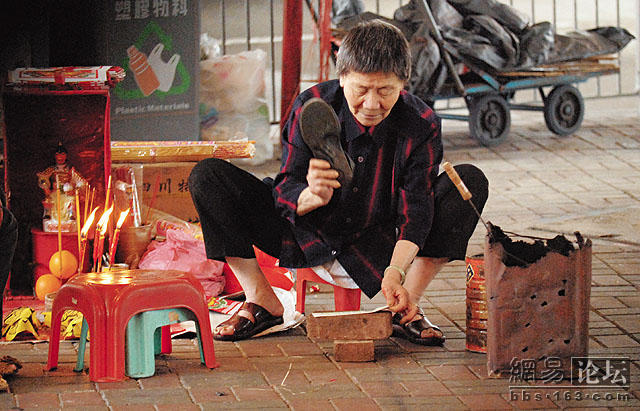 This sweet little old granny is participating in the time-honoured Southern Chinese tradition of "Da Siu Yan (打小人) " or "Villain Hitting"
"Da Siu Yan" headquarters is located under the Canal Road Flyover in Wan Chai in an area that used to be called Ngo Keng Kiu (鵝頸橋, lit. goose neck bridge).  It's in one of the busiest areas of Wan Chai - a tiny covered area next to the street market and under the concrete overpass right next to bustling pedestrian and vehicular traffic.  When we were in Hong Kong this past February, we would pass by where the Villain Hitting ladies set up their little "stalls" every time we were in Wan Chai. They had their little stools (for themselves and their customers), burning incense and candles, paper paraphernalia and of course, many well-worn slippers for hitting the "Villains" with.

The Villain Hitting ladies can curse people or dispel bad luck for a small fee.  From our observations, this was what the cursing involved:

1.  Writing the particulars of the person to be cursed on a piece of paper shaped like a person;

2.  Beating that piece of paper (placed on top of a brick) repeatedly with a slipper (or "flip-flops" - as Man Yung says, the more worn out the shoe, the better.  I guess if Irene and Man Yung were doing any Da Siu Yan we have to do it with a pair of Crocs);

4.  Sacrifice to the White Tiger.  There is a little paper tiger that you make a sacrifice to (No, not blood! BBQ Pork would do).  If you are lucky the White Tiger will fulfill your prayers and...carry off the person you are cursing (probably to someplace a lot nastier than Tango Hell).

The outgoing Hong Kong Chief Executive Donald Tsang didn't even get a slap on the wrist for accepting bribes in the form of gifts and luxury travel and accommodations - following the norm in the Mainland China Corrupt Communist Regime that is fast becoming normal in Hong Kong too, corrupt officials don't have to answer to anyone.  And you can't vote the jerk out of office. Disgruntled Hong Kong citizens got together for a massive Da Siu Yan session - more than 6,000 people, the largest Villain Hitting gathering ever:

Hong Kong citizens Villain Hitting en masse -
Look at the Giant papermaché White Tiger and the boat-sized flip-flop!
In fact, in non-democratic going rapidly towards totalitarian Hong Kong (i.e. the recent fixed election for the post of Hong Kong Chief Executive will install hardliner C.Y. Leung at the helm - he who will surely bring with him the beginning of government repression, or White Terror) what can people do except curse?  Don't think it is all superstition though - last year, thousands got together for a Villain Hitting party targeting other shady corrupt Hong Kong officials. Three out of the ten targets ended up in hospital within the year!

So, if you are a reckless, inconsiderate Crazy Leader - watch out!  Irene and Man Yung may not be able to do the Evil Eye, but give us a brick, a piece of paper and a flip-flop and we promise you it would be a WHOLE LOT WORSE than any amount of malevolent staring!*


* Just joking!  If you go home from a milonga feeling a little queasy or abnormal, it has nothing to do with Irene and Man Yung's Villain Hitting at all - we are very nice, non-cursing people! You probably just hurt your brain with the centrifugal action of doing too many volcadas.
Posted by Irene and Man Yung at 11:03 PM