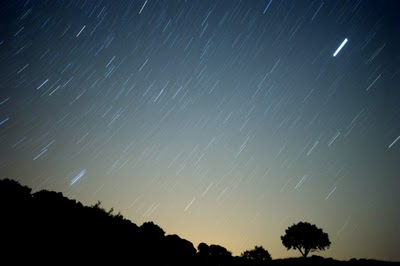 From the Toronto Star's gallery of photos around the world of the August, 2010 Perseid Meteor Shower

Thursday night rolls around with no plans for Tango. Man Yung was looking forward to an evening of home cooking and Chinese television.

My announcement disrupts his plans. "The Toronto Star says that there's going to be a spectacular meteor shower tonight. Let's go to the David Dunlap Observatory to catch the show!"

The cats all stare at us with sullen, yellow-eyed resentment. Mrs. P pipes up. "It's bad enough that the two of you are out three to four nights a week for Tango. Now you are going out on your off night too! Humans!" With a hiss and a salty Cantonese expletive, she dashed into the closet, unappeased by our offer of kitty treats.

Although the state of the sky that night appeared discouraging– a hazy humid gray tinged with light pollution – we set off for the Observatory. It was 10:30 p.m. and there seemed to be more cars than usual on the road - the red rear lights of the cars in front filled up the usually lonely stretch of road north to Richmond Hill.

I joked. "Perhaps they are all going meteor watching at the Observatory?"

When we turned into Hillsview Drive, we realized that my joke was not far from the truth. Parked cars were piled up tail to nose on lawns and curbs on both sides of the street. Volunteers waving LED flashlights stopped the incoming cars from advancing closer to the Observatory - and a young woman with a ponytail wearing a reflective vest flagged us down.

"You'll have to turn into one of the side streets and make your way on foot," she said. "It's jam-packed up there."

We squeezed the car into the last available parking spot next to the curb and joined the procession strolling towards the Observatory under the orange glow of the streetlights. People who bought the million dollar houses in the Observatory area for peace and quiet should contemplate suing their real estate agents. Astronomical "events" are not as rare as you would think - only two weeks ago there was a big viewing party for the "Northern Lights" extravaganza. On that evening as on this evening, eager sky-watchers filed past the darkened homes carrying lawn chairs, blankets, cameras and telescopes, talking and laughing and looking forward to seeing the spectacle. It was late at night but there were lots of kids - and lots of authoritative parents giving lectures in different languages about the composition of the universe.

Fifteen minutes later we turned off the municipal road into an unlighted path wending its way through the dense close trees to the Observatory grounds. It was really dark, but I don’t think anyone got scared – there were so many people around that the even the blackest night felt safe. No moon – only the silhouette of the trees and the milky gray sky in the middle, speckled with weakly winking starlight.

As usual, I was never at a loss for grammatically incorrect phrases and spelling errors. “I think this is the funnest ever!!” I exclaimed, gripping Man Yung’s hand as we walked on.

The trees thinned – the Observatory came to view. Small. Observatory-like. You have squint and fantasize real hard to romanticize it. What I was glad to see was that it had washrooms! With at least two thousand people congregating in the area, your first priority would be to have sufficient space for people to lie down and look up – and your second would be to have a place where people could relieve themselves.

With the number of bodies lying down on the wide lawn in front of the Observatory, it looked we were in the middle of a lovefest (minus the groping). We had to tread carefully around to avoid stepping on people’s heads. When we found our spot, what did we do? Normally I would think, “Ewww. Bugs”. Or “Doggie-do-do”. But it was a half hour walk back to the car, and we were there anyway (didn’t I suggest the whole thing in the first place?)… so I sprayed my ankles and my ears with bug repellent and lay down flat and awkward on the damp grass.

When you lie down, your perspective changes. Sometimes we do a little star-gazing coming out from the milongas in the middle of the night and we are enchanted by what we see, especially in cold clear Canadian winter skies – but that’s done on the run, we’ve always got to think about getting home soon. Here in front of the Observatory, we can’t move around (because of the bugs and the lumpy ground) so we have nothing to do but be still and look up.

The view of the sky was huge – yet intimate at the same time. There was the whole universe before your eyes, all the constellations, the planets in alignment. All of us there shared it – lived and breathed the cool night air, the sound of the breeze through the leaves, the shrill concert of the crickets.

Man Yung sighed. At peace. I thought: would it be inappropriate and disruptive if I whipped out my iPhone to check out the constellation map on Pocket Universe? I decided against it.

Then, the stars started falling - very faintly. You had to be quiet and have quick eyes to catch them all. Whenever one streaked across the sky, a line of chalky brightness burning itself into nothingness as soon you saw it - we heard gasps, followed by embarrassed, awed laughter; sometimes clapping.

In all we saw about ten meteors within the space of an hour. Then it became too chilly to stay. We slowly straightened out our cramped bodies off the ground and ambled out of the clearing among the trees. A stream of people were still heading in.

“Makes you really forget about all the worldly things that you thought was significant, looking at the sky like that,” Man Yung said as we headed back to the car. “Falling stars… they’re so mystical, so rare… it’s like those instances of exquisite harmony and pure brilliance when Martha and Manolo and Osvaldo and Coca performed to “El Adios”. Or that time when Alberto and Paulina danced to “La Tapera” in New York.

The most radiant meteors can be seen, even on a hazy night as this… but what of the thousands, millions that you can’t? Seventeen years ago, on a bright calm night in a village called Ossun in the south of France, I stared into the sky while sitting with a group of friends on a hillside. The surrounding towns glowed in the far distance. And the Perseids – they were out in full force, falling stars like rain, too numerous to count.

That magical, transformative light is there for you - so long you make it to an open space and look up. It’s there for you, even when the sky is overcast... so long you can still see clearly to the heavens with your heart -

Be still; and let it in. Don’t obscure it’s brightness with arrogance – ego, if you will - and scheming; toil for profit and for fame. If you let yourself exist and let tango exist in you, without the trappings of all those other things, you will no longer be just dull dust.

You will be the light that shines, that burns, that blazes - like meteors in the night sky…

Tango, being a popular art form, is truly for everyone... What a wonderful gift to the world.