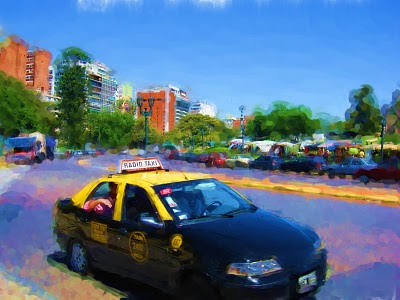 Man Yung and I are not veteran taxi-takers. When we lived in Hong Kong there was so much public transit available there was hardly ever any need to take a taxi, and here in the suburban hell of Scarborough, Ontario, Canada, we are slaves to the almighty car.

We approached the idea of taking taxis in Buenos Aires with much trepidation - the net is abound with stories of daylight robberies, fraudulent change-giving, outrageous scams, extended rip-off tours, or, at the very least, extreme jaw-dropping grandmother-scaring hair-curling eyebrow-raising impoliteness etc. etc.

However, we were pleasantly surprised after three trips to Buenos Aires and an average of around four to six taxi rides each day of our trips, that 95% of the time we have had good to terrific experiences with taxi drivers. Of the remaining 5%, we were lucky to encounter (knock on wood) no more than a little bit of a curt, surly attitude from the taxi driver.

That would mean, by our calculations, that 9.5 out of 10 of all taxi drivers we encountered in Buenos Aires were professional, polite, and intent on one goal and only one goal: to get you where you want to go in the most efficient route possible. In fact, one of the most enjoyable things we have experienced in Buenos Aires was the ability to flag down a taxi (because there are so many, night and day) at the spur of the moment and immediately be whisked off to wherever we wanted to go.

Likewise, our spanish-speaking Toronto milonguera friend has nothing but good things to say about the taxi drivers that she has encountered. On her last trip, just because they were talking about where to have the best empanadas in the city, the taxi driver drove her to El Sanjuanino in Recoleto and treated her to some. And no, he wasn’t trying to get her phone number - he was just trying to prove that hand made pastry and hand-chopped fillings make for the best empanadas, ever.

That being said, we understand that taxi-taking in Buenos Aires can still seem like a scary prospect for some people. In this light we offer you:

Irene and Man Yung's list of "Things they never told us about Taxi Drivers in Buenos Aires" (we had to learn the hard way, but then it wasn't too bad)

1. Don’t bother to look for seatbelts – there aren’t any

In Canada we get ticketed if we don’t wear seatbelts. In Buenos Aires taxis, you’d be lucky if you can find any, and if you find some, they are not likely to work. This was the conversation we had with a taxi driver on the first day of our first visit to Buenos Aires:

Take a deep breath and pray that the great spirit will give you strength to accept what you can’t change - or take public transit next time! It would save you a lot of aggravation.

Nevertheless, never fear - Buenos Aires taxi drivers are some of the best drivers in the world: See #3 below.

2. Flag down the taxi on the passenger side of the street

It took us a whole week to understand this. We would quite lamely flap our arms up and down standing on the driver side of the street trying to flag down a taxi. Almost all the streets downtown are one-way so we figured, what's the difference, the cars are all going the same way. Some taxi drivers took pity on us and picked us up anyway - but most taxis would just fly by without a backward glance.

I think there is a traffic law that forbids taxi drivers from picking up passengers on the driver's side of the road - so don't be idiots like us and get over to the right side of the road! The taxi drivers will be happier to pick you up if they don't have to contravene the law and that would make for a much nicer trip.

3. Buenos Aires Taxi Drivers are some of the best drivers in the world.

Man Yung used to be just plain terrified riding in a Buenos Aires taxi - gripping for his dear life on anything that was still attached to the door until his knuckles turned white. He used to swear that he would never, ever dare sit in the front passenger seat - because guess what, the thrilling experience may just cause him to lose control of his bladder.

However, many rides and zero accidents (knock on wood again) later, we've realized that Buenos Aires taxi drivers on the road are just like good milongueros on the dance floor. We can't count how many times our driver has easily overcome what we thought were "impossible" traffic situations in Buenos Aires. You don't believe that the taxi will be able to turn out of a lane when it's bumper to bumper with the bus in front of it without backing up? Wrong. You didn't think that your taxi could squeeze into a gap in the traffic that would be a tight fit for dental floss? Think again. Did you seriously doubt that your taxi driver could maintain a breakneck speed on the crowded streets and not hit any cars, pedestrians or light poles? Doubt no longer!

In fact, it appears that the more difficult the situation, the better the driving skill. The only time we almost got into a collision was on a completely quiet residential street with no traffic. Our taxi driver was so preoccupied looking for the address he almost collided at an intersection - into the only other moving car in the area within a four block radius!

4. The Great Debate: Radio Taxi or no?

Everyone says that for safety reasons, you don't get into a taxi unless it's a Radio Taxi. That's good advice and we would advise everyone to listen to it. Radio Taxis are affiliated with the larger taxi companies with dispatchers and there's less chance of any "funny-business" or worse. There's also less chance of getting lost, since the driver can call the dispatcher for directions. People traveling on their own or people who cannot communicate in Spanish should definitely only take Radio Taxis for their own safety.

That being said, we have taken Non-Radio Taxis. Why? Because sometimes it's hard to differentiate between Radio and Non-Radio Taxis (and you thought Man Yung's short-sightedness was only a handicap for him in the cabeceo) and it seemed rude not to take a non-Radio Taxi we had flagged down from across the street once it has arrived right at our feet. Sometimes it's the only taxi available on a dark street on a dark night in a dark, deserted neighbourhood and we've already been waiting for fifteen minutes.

Luckily (Knock on wood again and again) we have not been robbed or killed taking a Non-Radio Taxi. The worst thing that happened was that our Non-Radio taxi driver was unable to radio for directions to Glorias Argentinas, and therefore 1) he had to consult a very ancient tattered map and 2) he had to roll down his window and ask passing cyclists, pedestrians, and other drivers for directions and 3) he still get lost and circled a couple of times in order to get there. But he did get there anyway, and we have realized through talking to Oscar Hector and Alberto Dassieu and from taking other Radio and Non-Radio Taxis on subsequent trips - Glorias Argentinas is pretty difficult to find. People always overshoot it because all the streets in the neighbourhood are dark and sometimes signless one-way streets.

So with this in mind, please read #5 below for safety precautions while taking a Non-Radio Taxi, or indeed, any Taxi in Buenos Aires.

This is what I do whenever we take a taxi:

I scramble into the taxi while saying an audible and friendly "Buenos Dias Senor" (if day), "Buenos Tardes Senor" (if afternoon), or "Buenos Noches Senor" (if night).

We never slam the taxi door. We close it gently and cautiously, like the car was our own.

I have the destination address ready: either written large and legible with a bold Sharpie felt-tip pen on a small note pad which I immediately show to the driver, or I will tell him the intersection ("Callao y Santa Fe, por favor", for example) if it's a major intersection and I can pronounce it correctly. I won't bark out the directions - even while showing the written directions I will say, politely, "Por favor...."

When we are traveling to our destination, I won't be turning to Man Yung and yapping loudly and continuously in Chinese or English like the taxi driver wasn't there. I might exchange a few words with Man Yung but this is not the time to be engrossed in a private conversation - this is the time to observe your surroundings and, if your spanish is up to it, to engage the taxi driver.

For example, observe if the weather is hot/cold/rainy/sunny. "Hace mucho calor!" I might remark. Or perhaps point out something unusual happening outside. "Que paso? Hay una muchacha en un bikini en la calle!" And if we have a normal/polite taxi driver, he will respond in agreement, and offer an observation of his own.

If you have created a good impression so far (yes, it is important to create a good first impression, even to your taxi driver) and your taxi driver a nice normal, friendly guy, the taxi driver may continue a conversation with you. He'll like to know where you are from, why you are in Buenos Aires, whether it was the first time you have traveled to Buenos Aires, etc. This is not the time to clam up and feel offended about a stranger probing your background (unless you happen to be an International Man of Mystery, in which case you are entitled to your secrets) - this is an opportunity to practice your spanish, and perhaps find out a little about whatever you wish from a Buenos Aires expert. Yes, your Porteno taxi driver should be an expert in Buenos Aires - he drives around in it every day!

"But I'm so tired from staying up all night dancing in the milongas - all this sounds so exhausting!" you say. And I agree, it is exhausting to make so much effort - but there's a good reason behind it.

Be prepared to carry more cash for taxis during your upcoming visit in March. The base fare has been increased to $4.45.

I can't afford to take taxis and use the buses, subte or my legs to get around.

I think you missunderstand what a Remis is. If the car truly is a Remis, you must book it from the office (not hailed from the road or Hawked in a milonga).
They are registered, all journeys are logged and they should always agree a price first.
A Remis is the safest way to travel, as if anything happened the driver, the passengers and the route are known in advance and logged.

They are so safe people use them for light deliveries and even to take their children to school.
If someone in a milonga says that they are a remis and will take you home, they are lying, and just an oportunist.