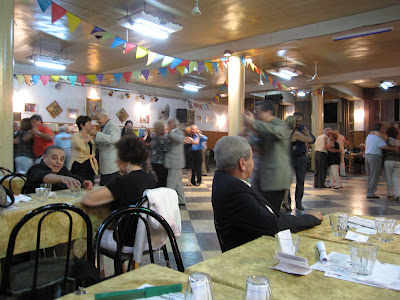 Glorias Argentinas
Instead of watching our cat hacking out hairballs, we are in Buenos Aires. The skies are blue, the humidity is just fine, the portenos are lovely and gracious, and we have eaten asado almost every single day. I myself am being eaten alive by the mosquitoes (they have a bit of a mosquito problem this year because there was so much rain a few weeks ago) but who cares, we are in tango heaven!

I thought that I would be able to gather a lot of material for the blog but alas, this has not been the case. So far we have been to Nuevo Chique, Lo de Celia, Los Consagrados (unfortunately we were not able to bump into Cherie and Ruben - we didn't know that they were still in Brasil), Glorias Argentinas, Sin Rumbo, El Beso, Milonga del Centenario in Viejo Correo - yes, we have been keeping more than busy. But guess what? No face dancing. No shoulder shrugging. No gratuitous adorning. In fact, the level of dancing has improved this year for locals and for foreigners. In addition, the attendance at the milongas we went to has been higher than what we have seen previously. The extranjeros in the more extranjero milongas still cannot control their desire to "mostrar" (as some locals have termed it) their bountiful tango talents, but at least they are "showing off" by dancing as "authentically and tastefully" as possible and not as "large and spiky" as possible. If only we could banish all the nincompoop leaders with the dangerously flailing elbows (apparently it is apex of "new trendiness", popularized by such as Pablo and Noelia and others - I couldn't even bear to look at some of the videos on youtube) to La Viruta, everything would be just dandy and there would be nothing to write about!

Our stay won't be long, but I'm dutifully writing down what has happened every day... so that I can bore you with the details, oh, three years down the road....
Posted by Irene and Man Yung at 10:23 AM

Oh my Gosh, I had no idea you were in BsAs! Please join us either this Thurs. in Nuevo Chique or Saturday at Los Consagrados. I so want to meet you!

We went to Nuevo Chique last Thursday and Los Consagrados last Saturday to see if we could bump into you but we didn't realize that you were still in Brazil! Thank you very much for the invitation. We can't make it this Thursday as we will have to be in Lanus. We have to go to Glorias Argentinas on Saturday night but we will arrive early at Los Consagrados - perhaps we will have better luck this time!

P.S. If anyone with flailing arms wants to assassinate us, now you know where we're going to be on Saturday!

Great, Ruben and I will at Los Cons from 7-10. Just ask at the door for our table.