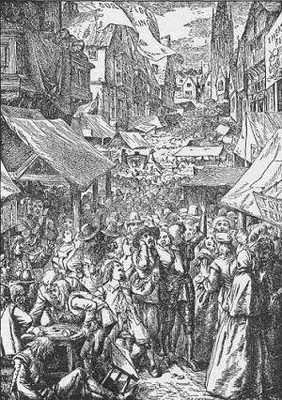 Someone booked the most extravagant, glittering hotel ballroom as the venue for the grandest and most important tango festival ever to be held in Toronto.

Opening night. A throng of people were milling about and chatting,waiting for the festival milonga to start. However, only six people showed up for the pre-milonga class. The dozen or so local and foreign teachers converged on the six and busily occupied themselves with teaching.

The organizer had decided that the general public should have an opportunity to see the whole spectacle and had therefore set up railings in the ballroom behind which passersby could observe. It was like a sports event. Some people stood, some people squatted, and some people sat, sprawled out with their tango shoes and coffee cups. There was quite a din as the participants continued to laugh and socialize at the edge of the dance floor.

Finally, the music started - but no, this was no ordinary milonga. The organizer paired up the dancers and made them stand in line to enter the dance floor one pair at a time. It was a pageant, it was a parade; you were there to see and be seen - to judge and be judged.

The organizer paired me up with a little girl of about eight or nine. Despite the ridiculous arrangement I was determined to enjoy myself at the milonga and I didn't care. It was our turn to take the floor and we started to dance.

So we had our little stumbles and missteps - so what? For me it was a lark. But for the little girl it was catastrophe. Every time something went wrong her frown deepened and her frame went slack. After a few minutes of this she just plonked herself down on the floor and refused to move.

"What's the matter? It's only dancing!" I said.

"But everyone's watching! I don't want to look bad!"

I tried to lift her up but she was determined to sink right down to the floor again. It was useless.

"What the hell is that?"

I was back in the darkness of our bedroom. Groggy from the dream, I struggled to comprehend the origin of that infernal racket which continued unabated. Man Yung sprang out of the bed to investigate.

Luckily, it was not a home invasion. It was only Mephistopheles - crouching under the dining table, trying his darndest to cough up a hairball the size of Texas.

Even your dreams are hilarious, Irene. I've also cleaned up hairballs the size of Texas....

That was sooo funny! My cat has been doing the same lately too! Must be catching!